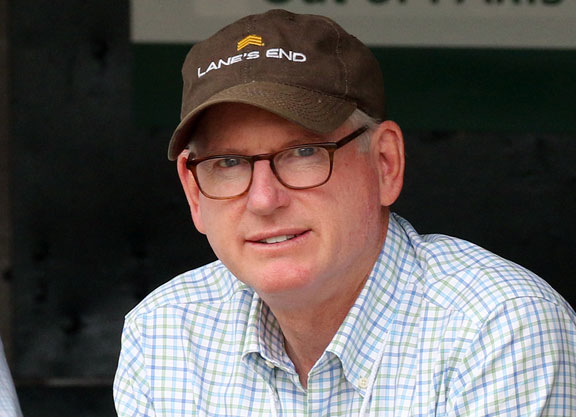 There are few people in racing more qualified to speak on the health of the sport than Lane's End's Bill Farish. In addition to running the historic farm, Farish is on the board of the Breeders' Cup, chairman of the Horse PAC and serves on the Board of Trustees of the Keeneland Association, the Grayson-Jockey Club Research Foundation and the University of Kentucky's Gluck Equine Research Foundation. Wednesday, Farish joined the TDN Writers' Room presented by Keeneland, calling in as the Green Group Guest of the Week to explain why he's “bullish” on racing's future, share his thoughts on the 140-mare cap and much more.

“I'm incredibly bullish on the future of the sport,” he said. “I think we've got a lot of positives. The state of Kentucky needs to get the historic horse racing deal figured out, because that's a huge, huge boost to the industry. If we can keep those purses where they were heading, and the Horseracing Integrity and Safety Act that was recently passed, I think is hugely important for our future. We've got to get the testing right. We need to have greater integrity and more confidence from the bettors in the product. I think that will go a long way in helping that. I was going to say restoring it, but I'm not sure it's ever been there to the degree it should be. I think that's a huge thing.”

Asked about The Jockey Club's new rule capping stallion books at 140 mares, Farish explained his support for the measure, saying, “First of all, I don't think there is as many people on the side of large books as there are on the side of limiting books. But, to me it's quite obvious, we have literally 50% the number of stallions standing in Kentucky that we did 20 years ago. That's a direct result of increased book size. So, I think looking at the list of mares bred this year, there would be literally, I think the number is about 900 mares, to spread amongst other stallions from the stallions that are being bred over 140.”

Elsewhere on the show, the crew reacted to the dominant performance of Knicks Go (Paynter) in the GI Pegasus World Cup, talked about where some of the weekend's dominant 3-year-old colts fit on the Derby trail and, in the West Point Thoroughbreds news segment, broke down the tricky situation surrounding historical horse racing in Kentucky. Click here to watch the podcast; click here for the audio-only version.