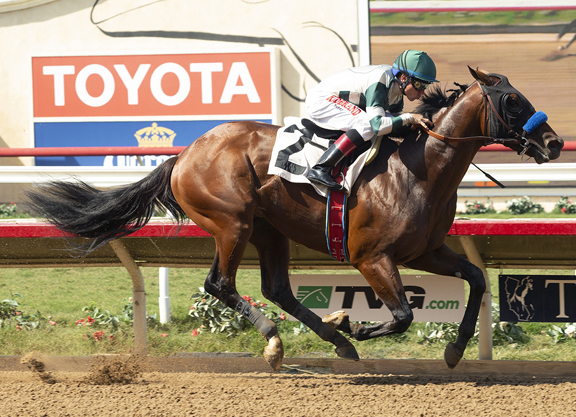 Tale of the Union | Benoit Photo

Michael Lund Petersen's Tale of the Union (c, 2, Union Rags–Tanglewood Tale, by Tale of the Cat) became the latest example of the incredible depth of the Bob Baffert barn Sunday as the $925,000 Fasig-Tipton Midlantic grad powered away to a convincing eight-length tally on debut at Del Mar, garnering the 'TDN Rising Star' distinction. Off a half-step slowly, the bay moved up in between rivals to pester speedy second timer Stubbins (Morning Line) through an opening quarter of :22.24. He left his rival in the dust through a :45.37 half, and the 4-5 chalk powered away under minimal encouragement to run up the score and stop the clock in 1:03.81. Stubbins held on for second.

A $90,000 Fasig-Tipton Saratoga New York-bred Preferred Yearling purchase by Brad Grady's Grand Oaks, Tale of the Union was the second-priciest purchase in May at Timonium after breezing a furlong in a powerful :10 flatwith an energetic gallop-out. Fellow Michael Lund Petersen-owned and Baffert-trained firster Mucho Gusto (Mucho Macho Man), the fourth topper at Midlantic at $625,000, was scratched from this same race.Baffert has now unveiled five 'TDN Rising Stars' during the Del Mar stand (Game Winner, Roadster, Chasing Yesterday, Mother Mother).

Tale of the Union is the second foal out of Tanglewood Tale, a seven-length debut romper in the Saratoga mud at two before eventually landing in the claiming ranks and subsequently winning three more times at age four. His year-older full-brother Big Thicket most recently took a Finger Lakes allowance in June. Agent Mike Ryan scooped up Tale of the Union's yearling half-sister by Lemon Drop Kid earlier this month at the Fasig New York-bred sale. Tanglewood Tale foaled a Tiznow colt this term before returning to Union Rags. She hails from the extended female family of two-time champion sprinter Housebuster (Mt. Livermore).

The Union Rags–Storm Cat cross has been a potent one, and is also responsible for the likes of Grade I winners Paradise Woods and Free Drop Billy.