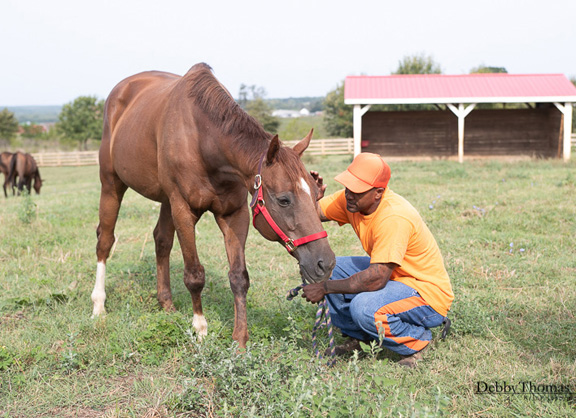 The State Farm Work Center in Goochland County, Virginia, is located in the middle of beautiful hunt country and surrounded by a very tight community of successful horse people. When the Thoroughbred Retirement Foundation (TRF) established the Second Chances program, commonly referred to as Barn 4, at the State Farm Work Center (which was then known as the James River Correctional Facility) 12 years ago, the locals formed a volunteer oversight committee and took the reins. The self-motivated and inspired group continuously put their heads together to innovate and expand upon the program. Improving the lives of the horses and the men at Barn 4 became their collective goal and they never looked back.

The committee members' personal commitment to that goal was evident in how involved in the daily workings of the program they became and how they went to new depths of understanding the plight of offenders in trying to reenter the community and the workforce. The committee approached fundraising with the same vigor resulting in a multifaceted development platform including unique and fun events connecting the surrounding community to the program and its horses. Any stigma that may have been associated with working alongside inmates was totally absent and instead this group embraced the challenge of rehabilitation and successful reentry with a passionate and almost competitive drive.

“We are very goal oriented and there are a lot of different talents on our board,” said Anne Tucker, one of the founding members of the oversight committee. “This whole community has really supported this program with donations and with time and that has made it successful. We have vets, trainers, farriers, business people and almost everyone is willing to volunteer and go in and speak to the students.”

Today, 12 years since the program's inception, it has taken a new course. Tucker, along with Randall Hagan, another member of the local committee, have formed a new 501 (c) 3 called the James River Horse Foundation (JRHF) and in agreement with TRF, JRHF assumed full responsibility and ownership of the 29 Thoroughbreds and the vocational training program Oct. 1. On Oct. 16, they voted all of the members from the original committee onto the JRHF board.

“By reorganizing locally and having the contract with the Department of Corrections ourselves, it will make things run more smoothly and give us more independence and flexibility,” said Tucker. “For instance, as we make changes and enhancements to our educational program, we need to be able to work with the department directly.”

The other big change at Barn 4 is that the state is switching entirely over to a women's facility. JRHF saw this change as an opportunity to adapt the educational program to a model they see as reflective of the new population's experiences and attributes.

“In making the transition to a women's program, members of our board went to two different prison facilities and interviewed 22 women for eight positions,” said Tucker. “The competition was fierce. It was amazing to me how many of the women grew up on family farms of some kind.”

“It struck us that many of the new students have children and would be going back to farm country where they could work with horses and carry the all positive things from the program with them–not just the job skills. It was a way to make a real impact on their families and future generations.”

JRHF created a new curriculum that has three levels of intensity and depth in horse care and horsemanship–each lasting 30 days. The emphasis is on training to establish a career in farm management. As students complete each section, and if they are doing well, they can decide if they want to stay in for the next segment and eventually, after 90 days, become teaching assistants. Currently, the program is limited to eight students at a time because it allows the instructor Cynthia Weldon to give the requisite personal attention to the women and the horses.

“The women approach the program a little differently than the men,” said Tucker. “As mothers and natural caretakers, they are deeply appreciative of the opportunity to nurture, and when they see something that needs to be done, they just do it.”

In the theme of 'doing what needs to be done,' Tucker has started Through the Gate, an EAGALA (Equine Assisted Growth and Learning Association) program on her own farm. Of the 10 Thoroughbreds that reside with her, three are horses that she adopted from Barn 4.

“I had witnessed such remarkable changes in so many men during the first few years of the TRF Second Chances program here that when I heard about EAGALA, I was just blown away,” said Tucker. “In the EAGALA model, a client or a group is placed in a paddock or arena with one or more horses and the EAGALA team, which consists of an EAGALA-certified equine specialist and an EAGALA-certified mental health professional. We provide a space where the client can experience their story and come up with their own solution. The Thoroughbreds are so sensitive to the person's feelings, that stuff just boils out.”

“I am fortunate that my partner in EAGALA is a trauma psychologist who worked for years in the Oklahoma prison system and has used EAGALA in all sorts of ways, from building self-esteem in teenagers to grief counseling and treating compassion fatigue.”

“We are also fortunate to have a couple of horses that are especially good at connecting with people. I think the Thoroughbreds are very good at this because they are such smart horses, and they have experienced some difficult times themselves.”

Tucker's Through the Gate program is an important resource for Barn 4 graduates who need support in making the difficult transition from prison to the community.

“We see graduates who need that extra help in coping with life on the outside,” said Tucker. “One of our current participants is going through the EAGALA program and getting help reestablishing relationships with his family as well as getting along with his boss and co-workers. He is making enormous progress.”

Barn 4 proudly touts a lower rate of recidivism than average. Two of its male graduates are now successful local farriers. Among the reasons for the success is how this local community has taken responsibility for the success of program.

Completing the circle in the effort for successful reentry is Little Hawk Farm, owned by Dr. Tom Newton, who has volunteered his services caring for the horses at Barn 4 since its inception.

“At Little Hawk Farm, Dr Newton hired a program graduate, Scott Frankel, upon his release from Barn 4 and they have created a reentry support program,” said Tucker. “They are hiring other graduates as they get released and helping them with the hurdles of getting back into life while working on the farm. They help with getting their driver's license back, budgeting and the search for employment.”

Back at Barn 4, the women's program is proceeding and the students are getting to know their equine charges. DeAnna, a 41-year-old mother and grandmother who is serving time for embezzling funds after she became addicted to pain killers, has written about the awakenings in herself as she works to have the horses accept her and respond to her:

“I have had the privilege of working with Creek Bay one-on-one. At first, he seemed very stand-offish and didn't seem interested in me at all until two weeks ago when we were practicing how to send the horse away to get him to come to you and walk with you without a lead rope. At that point, I couldn't send him away because he wouldn't leave my side and went exactly where I went! The feeling I got from this was amazing.. I look forward to going to work everyday finding peace and therapy in it. [To say] thank you for this opportunity doesn't seem like enough to say, but it is all I have except to say that I will do everything possible to ensure that Creek Bay is well taken care of and enjoys his retirement.”

On the future of Barn 4, Tucker sees more potential and possibilities to help horses and people.

“I feel like for 12 years we have done a great job and learned a lot,” said Tucker. “But we can do more. There is still more to do. We can make this program even better.”

For more information about James River Horse Foundation (JRHF), contact Anne Tucker at [email protected] or 804-357-4075. Diana Pikulski is the editor of the Thoroughbred Adoption Network and a partner at Yepsen & Pikulski.