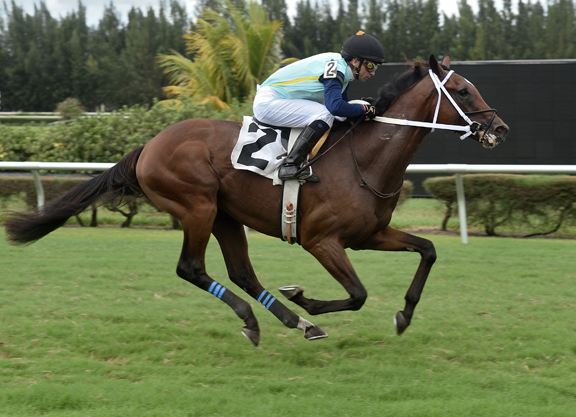 Sole Volante (Karakontie {Jpn}) wasn’t the only first-out winner in the fifth race at Gulfstream West Saturday. The 2-year-old gelding was also the first starter and winner for Andie Biancone. The 22-year-old Biancone is the daughter, and traveling assistant, of trainer Patrick Biancone.

“It’s super exciting,” Andie Biancone said after the race. “I’m at Keeneland, so I couldn’t be there, but I was amazed at how he ran–I was so proud of him.”

The father/daughter team picked out Sole Volante at this year’s OBS April sale.

“I was at OBS in April with my dad and he saw this horse and he loved him right away,” Biancone recalled. “We ended up getting him for $20,000 and my dad gave me half of him for my birthday.”

Biancone also gallops for her father and she admitted Sole Volante was initially a project.

“When we first got him, he was very high-strung and was in a lot of discomfort,” she said. “So we gelded him and, as soon as we gelded him, he’s just been a dream to work with. I get on him every morning and he is one of my favorites to ride. He is just a really kind and intelligent horse and we’re really excited to have him.”

Of expectations for the gelding’s first start Saturday, Biancone said, “He’s had some pretty impressive works and galloping in the mornings, he always loves to do his job. He’s always on the bit. But I was thinking, he might need a race, honestly.”

“My dad and I designed my silks together,” Biancone said. “I have the same silks as him, just with navy blue sleeves. It was really special to sit down and do that with him. It’s awesome to own a horse like–just to own any horse. It’s so fun.”

Biancone is a junior at the University of Florida, but is currently taking a semester off from her studies to work full-time for her father. But her long-term goal is to follow in her famous father’s footsteps.

“In the second grade, I came to school on career day with a Racing Form and a clock and everyone asked, ‘What are you?’ and I said, ‘I’m going to be a trainer.'”

Asked if her goal was still to take up training, Biancone answered swiftly.

5th-Gulfstream West, $38,000, Msw, 10-12, 2yo, 7 1/2fT, 1:31.74, fm.
SOLE VOLANTE (g, 2, Karakontie {Jpn}–Light Blow, by Kingmambo), let go at 13-1, was unhurried early and settled near the back of the pack. He made rapid progress on the turn, came six wide into the stretch and closed stoutly, powering home a three-length winner. The ninth winner for freshman sire (by Bernstein), Sole Volante is a half-brother to recent GIII Canadian Derby winner Explode (Trappe Shot, GSW, $255,863). He sold for $6,000 at Keeneland September last year and was acquired by trainer Patrick Biancone for $20,000 following a furlong work in :10 2/5 at this year’s OBS April sale. Light Blow is a half-sister to group winners Limnos (Jpn) (Hector Protector), Shiva (Jpn) (Hector Protector) and a full to Group 1 winner Light Shift–dam of Group 1 winner Ulysses (Ire) (Galileo {Ire}). She is also a half to the dam of Group 1 winner Cloth of Stars (Ire) (Sea the Stars {Ire}). The mare’s colt by Air Force Blue sold for $12,000 at this year’s Keeneland September Yearling Sale. She produced a filly by Karakontie this year and was bred back to that Gainesway stallion. Click for the Equibase.com chart or VIDEO, sponsored by Fasig-Tipton. Lifetime Record: 1-1-0-0, $22,800.
O-Andie Biancone; B-Flaxman Holdings Limited (KY); T-Patrick L. Biancone.