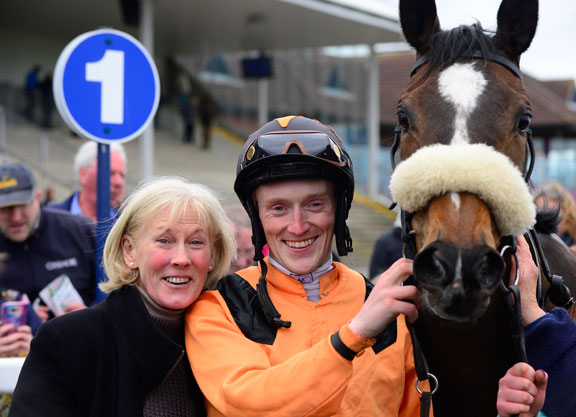 British Horseracing Authority Chief Executive Julie Harrington said in a Zoom call with members of the media on Wednesday that she does not anticipate barriers to runners trained by Denise “Sneezy” Foster competing at Cheltenham next week, but that British racing's governing body is seeking clarification from the Irish Horse Racing Board on the conditions of Foster's license. The day after it was announced last week that leading Irish National Hunt trainer Gordon Elliott was banned for a year-with the second half of the ban suspended-after a photo surfaced of him on social media astride a dead horse in his care, it was revealed that Foster, who trained a small dual purpose string up the road from Elliott in Co. Meath, would take over Elliott's license and operate from his Cullentra Stables while he served his ban. The BHA had placed a ban on Elliott having runners in Britain while his investigation was ongoing.

Harrington said on Wednesday, “We are really pleased that our colleagues in Ireland acted swiftly, so that this wasn't hanging over us throughout the Festival. That's not as simple as to say 'let's draw a line under it and move on'–but the sanction is in place. Our temporary ban is lifted, because Mr Elliott's ban is in place, and those horses are free to run for other trainers.

“In terms of any conditions to her licence, that is a matter for the IHRB. But I'm in contact with Denis Egan [chief executive] at the IHRB, understanding what those conditions are for the good reputation of racing in Ireland and Britain. We're asking what conditions have been put in place. But that is a matter for the Irish–we're currently seeking clarifications of what conditions are put in place. We're assuming we'll know before Cheltenham. It will be conditions to the licence rather than the sanction–that is where they will be applied. We're asking for those but also making it clear what our views are on behalf of JCR [Jockey Club Racecourses] as well. We want to make sure that any horses attending are not clearly under the Gordon Elliott flag.

“I've made our views on it clear, and we're waiting to hear what conditions will be applied to Denise. Then we will also be able to look, if we're not happy, at what is available to us within our own rules. At this point we're having really good discussions, so I'm not envisaging us getting to that point [preventing the horses running].”

“We want the coverage to be about the great stories and the great achievements of the horses–it is the shop window for our sport,” Harrington said. “It's an opportunity for us to really shine and tell the positive stories that are linked to our sport. We're not naive, though–we know people will have questions, but what we don't want to do is detract from all the hard work that goes into preparing horses for the Festival. It would be such a shame for everybody who has worked all year to get those horses ready to not get the airtime that they deserve.

“If Denise Foster has winners at the Festival, the story being around the connections of that horse is what I hope is put forward.”