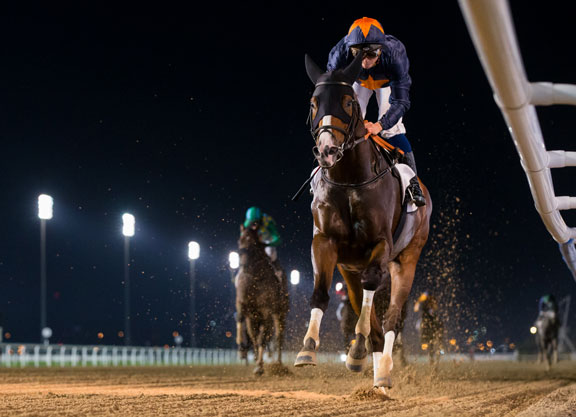 Capezzano (Bernardini) was a revelation at last year’s carnival when winning three straight including the G1 Al Maktoum Challenge R3 by 9 1/2 lengths over Thunder Snow (Ire) (Helmet {Aus}), but the 6-year-old gelding had been off since coming up lame after a last-place finish in the G1 Dubai World Cup. The dark bay had never won first-up but he put that stat firmly behind him with a seven-length victory in stakes record time in Thursday’s G3 Firebreak S. going a mile on the dirt. Bouncing away from gate five, Capezzano and Mickael Barzalona led the way down the backstretch with some of the other expected speed in the race failing to materialize. Three lengths clear by the time they hit the quarter pole, Capezzano was much the best at the wire having been hand ridden throughout, with Secret Ambition (GB) (Exceed and Excel {Aus}) coming on for second after missing the break.

Trainer Salem bin Ghadayer said it is the Feb. 29 $20-million Saudi Cup next for Capezzano, followed by the Dubai World Cup on Mar. 28.

“I know it’s just two weeks until the Saudi Cup, but we needed this race for his confidence, and thank God he performed well,” the trainer said. “He showed his ability. We will go to the Saudi race and then [Dubai] World Cup night.”

Barzalona added, “He ran a big race and should have plenty left in the tank. We are pretty happy with the way he is handling it before the race. I’m pretty sure this will give him a lot of confidence. Now he will fly over there [to Saudi Arabia] and the track will suit him over there as well. Hopefully he runs a big race. I’m very pleased with the way Capezzano ran today.”

Capezzano’s dam Cableknit was unplaced in two starts but being a daughter of Unbridled’s Song and a half-sister to GI Breeders’ Cup Sprint winner and leading sire Speightstown, she had already earned a spot at stud and has justified it. Cableknit and Speightstown are also siblings to Irap (Tiznow), winner of a GI Kentucky Derby prep in the GII Blue Grass S., and later in the year the GIII Ohio Derby and GIII Indiana Derby. The line of the third dam, Silken Doll (Chieftain), has produced a myriad of stakes winners including the GI Spinaway S. winner Mani Bhavan (Storm Boot). Cableknit has a 2-year-old full-sister to Capezzano named Vintage Style, a yearling filly by Raison d’Etat and is due to foal to Honor Code this season.