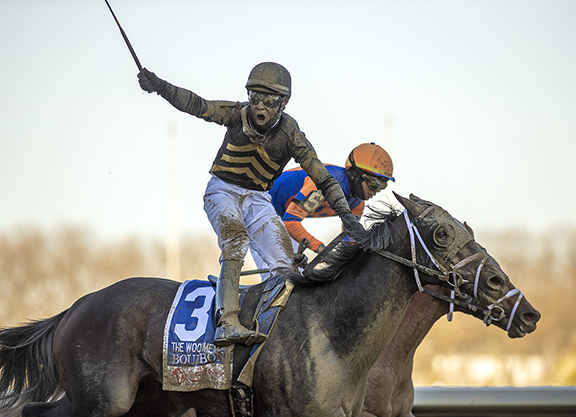 Calumet Farm homebred Bourbonic (Bernardini) was well deserving of his 70-1 odds on paper, but came flying late to nail stablemate Dynamic One (Union Rags) on the line in Aqueduct's GII Wood Memorial S.

Away well from post three, Bourbonic was unhurried early, trailing the field as fellow 70-1 shot and familiar foe Market Maven (Super Ninety Nine) dictated terms, setting early fractions of :24.88 and :50.18 with Weyburn (Pioneer of the Nile) breathing down his neck and Candy Man Rocket (Candy Ride {Arg}) close behind. Weyburn drew even with the pacesetter as three-quarters went in 1:14.98 with Bourbonic still biding his time, well behind the rest of the field. Weyburn took control at the top of the lane with Dynamic One ranging up menacingly to his outside and Crowded Trade (More Than Ready) coming alive in the four path. Meanwhile Bourbonic had just one rival beat with plenty left to do. Dynamic One disposed of Weyburn in mid-stretch, but Crowded Trade still posed an imminent threat as he continued to gain on the leader. However, Bourbonic was just finding his best stride on their outside, gobbling up ground in the final sixteenth to deny his stablemate in a photo finish. Crowded Trade completed the trifecta with Weyburn holding on for fourth.

“Todd [Pletcher] asked me what I was going to do and I told him I wouldn't move,” said winning rider Kendrick Carmouche. “I was just going to sit, sit, sit, sit and hopefully get out the last quarter of a mile. I knew he would go on from there. My horse was in a good stride. Each pole I was picking them up one by one without even asking. I'm thrilled for Calumet Farm. I won my first Grade I with True Timber in the Cigar Mile for them and now I won the Wood for them. These past six months of my career have just been what you dream of.”

“We felt like both horses were coming into the race in good order and we always had high hopes for Dynamic One,” said Pletcher, who was winning his sixth Wood Memorial. “He's a horse that's just starting to put it all together. I was pleased with how they were coming into it, but with Bourbonic, it was Mr. Kelley of Calumet, who said he'd like to try a race with Derby points in it. They're always game to take a chance. We always felt this horse [Bourbonic] would handle added distance. He was able to get a perfect trip and sit back and make one late run. He was able to get there just in time. It was a big effort.”

As for Dynamic Force, the conditioner said, “The one thing we were concerned about is if he made the lead he might idle a little bit. Jose [Ortiz] said he tried to time it as well as he could and he was hoping the leader would carry him to the wire more than he did. It was another step forward for him.”

“I'll talk to all the connections and see what everybody wants to do but that was the purpose of being in today's race; take a shot and see who would step up and fortunately it worked out,” Pletcher said.

Sixth in his seven-panel unveiling on the Belmont main track in October, Bourbonic didn't run a step when trying two turns on a yielding turf course at Aqueduct Nov. 14. Breaking through by 4 3/4 lengths when dangled for a $50,000 tag going a mile on the Aqueduct main track Dec. 6, he posted a narrow victory in a starter optional claimer over track and trip Jan. 17. The homebred entered this off a runner-up finish to re-opposing Market Maven in a sloppy optional claimer at Parx Feb. 23.

Bourbonic is the 48th graded winner and 80th black-type scorer for the ultra-consistent Bernardini. He also provides Afleet Alex with his fifth graded victor and ninth black-type winner as a broodmare sire. Calumet Farm purchased GII Delaware Oaks heroine Dancing Afleet for $170,000 with Bourbonic in utero at the 2017 Keeneland November Sale. She failed to get in foal to Mineshaft the following season, but produced a filly by Calumet's Ransom the Moon in February of 2020. The 11-year-old mare was bred to both Oxbow and Ransom the Moon last spring. The winner is also a half to MGSP Avant Garde (Tonalist).