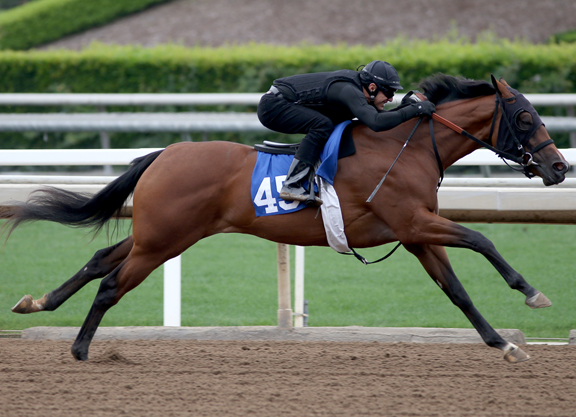 ARCADIA, CA – Fasig-Tipton conducted its first breeze show ahead of the inaugural Santa Anita 2-Year-Olds in Training Sale in Arcadia Monday, attracting a large crowd of buyers, sellers and trainers to the grandstand to watch 120 juveniles work over the main track. A filly by Bernardini had the fastest furlong breeze time of :10 1/5, while a colt by Tapiture turned in the fastest quarter-mile breeze of :21 1/5.

“It was a very, very well attended under-tack show–there was a great crowd with a very diverse group of people in attendance from trainers and buyers and a lot of faces we didn't recognize,” said Fasig-Tipton President Boyd Browning, Jr. “Santa Anita is a spectacular facility and it's a spectacular setting. It gives horses a real opportunity to demonstrate their ability. We are big proponents of a dirt racetrack from an under-tack show perspective. We are very pleased that the first under-tack show here went off very smoothly and very professionally.”

The first Fasig-Tipton Santa Anita breeze show came as the track is under heavy scrutiny after a high number of equine fatalities during its current meet. Monday's breezes were turned in over a deep track that yielded times slower than typical under-tack shows and riders were also held to Santa Anita's house rules on the use of whips.

“There were some rules that were put in place in conjunction with Santa Anita,” Browning said of the whip policy. “The riders had to keep both hands on the reins and could not reach back and strike the horse. They could tap the horse on the shoulder a few times, but you couldn't reach back and strike the horses at any point in time, before or during the breeze, which is consistent with [Santa Anita's] house training rules in the morning. It's a little bit different environment in that regard and I thought we had great cooperation from the consignors and riders who put on a professional breeze show with a little bit of a change of technique.

Browning, Jr. continued, “Everybody was under intense scrutiny for this under tack show–I don't think there is any question about that or any denying that. I think the folks at Santa Anita and our people at Fasig-Tipton worked very, very closely with consignors and everybody understood the importance of having a good performance today in all regards for the long-term and the short-term benefit of sales and racing. It was an important day and I am glad we successfully got through it and saw some good horses perform on the racetrack.” Bloodstock agent David Meah, who regularly rides out on the Santa Anita track, saw a lot of positives in Monday's preview.

“I think it was a very safe track, a good, deep surface,” Meah said. “I think a lot of people might be a bit put off by the times overall, but being here, working here, and galloping on the track every day, we know the track has been slow. It's been slow for a few months. For me, a slow, safe track is much better than a fast, hard track.”

Asked how people should gauge the times, Meah said, “Be forgiving. It is a slower track–a :10 2/5 or :10 3/5 here, you could compare it to a :10 flat. Take that into consideration. I think a lot of the horses are going to come out of these works well, which is a good thing when you go back to vet them afterwards.”

Of the more conservative use of the whip, Meah said, “I think that's a great thing. We are in a very tricky time right now with horse racing all over the country. It is going to impact everyone. And I think making the riders stick to the hands on the reins, whipping down the shoulder, corrective measures instead of making them go fast, is a good thing. Good horsemen can see a good horse, whether it goes :10 flat or :11 flat. A good horseman should be able to see that.”

Raul Reyes's Kings Equine sent out a filly by Bernardini (hip 45) to post the furlong bullet time of :10 1/5. Out of Elbe (GB), the bay filly was purchased by Reyes for $11,500 at last year's Fasig-Tipton October Sale.

“I was very happy with that,” Reyes said of the work. “She handled the track very well and did everything right. She has breezed very fast at the farm, so this was really not a surprise for us.”

Asked about the filly's appeal last October, Reyes explained, “She looked fast. She is not very big, but she looks fast. That's the reason I bought her.”

Kings Equine is based in Ocala and Reyes thinks there is a good chance the Santa Anita auction will attract more Central Florida consignors next year.

“If I make a lot of money, they'll come next year. We'll know after Wednesday,” he said with a laugh.

Another Ocala-based consignor, Tom McCrocklin, sent out the day's fastest quarter-mile worker. Hip 12, a colt from the first crop of multiple graded stakes winner Tapiture (Tapit) went the distance in :21 1/5. The youngster was purchased by McCrocklin on behalf of the Solana Beach Sales pinhooking partnership for $100,000 at last year's Keeneland September sale.

“I'm very reluctant to sound arrogant about that horse, but I expected him to work faster than anybody and I expect him to top the sale,” McCrocklin said of the son of stakes placed Baby Bea Scattin (Scat Daddy). “I've never had that degree of confidence about a horse.”

The chestnut colt was making his first appearance at a 2-year-old sale Monday.

“We specifically wanted a very nice colt for this arena,” McCrocklin said. “There are some very prominent buyers and trainers here and we wanted to bring a really nice horse here. We were extremely patient and we waited. He was pointed specifically for this sale.”

“First by a long ways is Fasig-Tipton,” McCrocklin said of his decision to ship west for the sale. “I think they do a tremendous job. They are very good to me, they are the consummate professionals in running a sale and I wanted to go out of my way to support it. Also, I do a lot of business in Southern California and I think we need to have a presence in the 2-year-old sales market here. We need Southern California, we need Santa Anita, we need The Stronach Group and we need Fasig-Tipton to be intimately involved in running a 2-year-old sale here. So I came here to support it.”

Of the track surface, McCrocklin said, “Times were slow, but there is a lot of talk about the racetrack. It's safe. My horses have trained well over it for the last 10 days, they pulled up good out of the breezes and I have no complaints about the track. Just adjust your thinking when it comes to times. We are lucky we had a horse go :21 1/5 here, but he's a special horse. And that's a very difficult task over this track because it is a little on the slow side, but it's very safe and it's very fair.”

Solana Beach's Billy Koch was among the owners with pinhook prospects in the sale watching the breezes intently from the grandstand, as was Scott Dilworth and Tom Mansor, whose team gave a big cheer as his American Pharoah colt (hip 88) turned in a flashy :10 3/5 work.

A full 20 horses galloped over the Santa Anita surface instead of turning in the traditional breeze. Eight of those gallopers came from John Brocklebank's TIP Thoroughbred Investment Possibilities consignment, which sent them out to gallop in sets of two.

“Most of them got here late in the year and some of the guys decided they just didn't have enough time in the horse,” Brocklebank said of the decision to gallop the horses. “Some of them we topped off late last fall, but then they just turned them out. So literally some of the horses were pulled in in March. So they are a little behind.”

As his clients were committed to supporting the sale, Brocklebank cautioned buyers not dismiss his gallopers, particularly a son of Lookin at Lucky (hip 25), about whom he said, “I can tell in the last 30 days, this horse just stepped into the phone booth and he's putting the “S” on. He'll be coming out.”

Brocklebank continued, “I think the recipe is right to find a nice horse here. And those gallopers–I know there are one or two in there that people should keep their eyes on. They are here for a reason. They are trying to support the sale.”

The inaugural Fasig-Tipton Santa Anita 2-Year-Olds in Training Sale will be held in the track's paddock Wednesday with bidding scheduled to begin at 1 p.m. PT.