Bernardini Colt Runs to the Money at Gulfstream 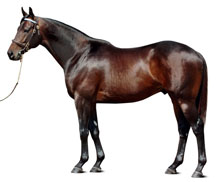 +ZULU (c, 2, Bernardini–Temporada, by Summer Squall), who sold for $900,000 Fasig-Tipton Florida juvenile after a :10 1/5 breeze, took all the money here and did not disapoint with a debut score as the 3-5 favorite. The bay engaged in a protracted duel with Sharp Azteca (Freud) from the outset, jetting through fractions of :22.35 and :45.18 on the front end. Zulu appeared to momentarily give up the lead midway on the turn but battled back resolutely to score by two lengths over his persistent foe. A grandson of MGSW Lemhi Go (Lemhi Gold), he is a half to Third Chance (Kafwain), MSW, $481,464; and Banner Bill (Rockport Harbor), MSW, $349,217. The winner, who gave his trainer a sweep of the early double, also sold for $400,000 as a Keeneland September yearling. The winner's dam produced an unnamed colt by Elusive Quality last year and was bred to Animal Kingdom this year. Lifetime Record: 1-1-0-0, $24,000. Click for the Equibase.com chart or VIDEO, sponsored by Fasig-Tipton.