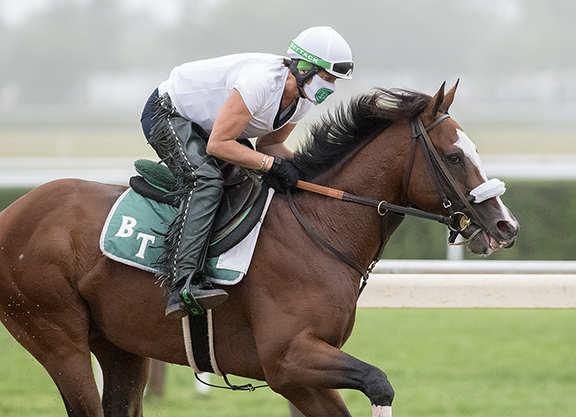 ELMONT, NY — Shortened to 1 1/8 miles and to be contested free of spectators, the 152nd renewal of the GI Belmont S. kicks off a reshuffled Triple Crown Saturday.

The winner will have to wait until the first Saturday in September for the GI Kentucky Derby, however, to continue a bid for what would have to go down as the most unique of sweeps if able to join the legendary previous 13 to do so. The series concludes with the GI Preakness S. at Pimlico Oct. 3.

Welcome to horse racing amidst a global pandemic in 2020.

Jack Knowlton and trainer Barclay Tagg have been here before. Well, sort of. In 2003, the folks at Sackatoga Stable famously packed a school bus and made winning stops in Louisville and Baltimore with the popular gelding Funny Cide (Distorted Humor) before coming up short in Elmont.

Tiz the Law (Constitution), a dominating winner in his two starts at three, led by the GI Curlin Florida Derby at Gulfstream Mar. 28, can provide some redemption for the group at 5:42 p.m. ET Saturday. He is the 6-5 morning-line favorite.

Both New York-breds, Funny Cide and Tiz the Law were produced by first-year WinStar stallions.

“We're excited to have an opportunity to be in the Belmont again,” Knowlton said. “The pressure isn't quite as great this time given the fact that we were trying to end a Triple Crown run at Belmont the last time and win a $5-million bonus from Visa, so there was a lot more at stake in that sense going into that race.

Knowlton continued, “But this is exciting. It's historical and we're hoping that we can win the first leg of the Triple Crown at Belmont and complete Sackatoga Stable's Triple Crown, albeit with two different horses, and be the only horse that has a chance in this crazy upside down year to make a Triple Crown run.”

They won't be able to gather at the races this weekend due to the COVID-19 epidemic, but that won't stop a good portion of the 35 partners in Tiz the Law-representing 13 states across the country–from getting together, following proper social distancing guidelines, of course, Governor Cuomo.

“About half of the partners are going to descend upon Saratoga Springs,” Knowlton said. “One of our partners, Bruce Cerone, owns a restaurant named Pennell's and he has an outdoor patio. Current plans are to get the group together and enjoy three hours of the NBC telecast.”

Knowlton added, “This group has a number of people that have been in Sackatoga for many years and some other people that are very fortunate and it's their first horse. It's a good group. We've expanded-a lot of people from all over have joined Sackatoga.”

Tiz the Law was picked up for $110,000 as a Fasig-Tipton Saratoga New York-bred yearling, Sackatoga's only purchase at public auction in 2018. Out of the graded stakes-winning Tiznow mare Tizfiz, Tiz the Law hails from the extended female family of Horse of the Year Favorite Trick. He was bred in the Empire State by Twin Creeks Farm.

“It's all Barclay Tagg and Robin Smullen,” Knowlton said. “They're our trainer and assistant trainer, and our bloodstock advisors. They're very good at what they do and we've now had two very serious horses. We buy typically one, maybe two horses a year, and always New York-breds. The most we've ever spent on a horse was $180,000.”

Tiz the Law's resume also includes a visually impressive win at two in the GI Champagne S. going a one-turn mile at Belmont last fall. Shortened from its traditional 1 1/2-mile distance, the Belmont will also be contested around just one turn this year.

The lone hiccup from the bay so far in five career starts was a close third with a less-than-ideal trip over a sloppy track in last November's GII Kentucky Jockey Club S. beneath the Twin Spires.

Manny Franco will be aboard for the fifth straight time Saturday.

“It's going to be a long time before we get to go to Churchill [for the Derby], but we'd love the opportunity to go there as the winner of the first leg,” Knowlton concluded.

“If we're fortunate enough to be healthy and sound by that time, we will be back in maybe a couple of school buses for social distancing purposes.”

Saturday's forecast on Long Island calls for a mix of sunshine and clouds and temperatures in the low 80s. A stray afternoon thunderstorm is possible, per weather.com.

With Grade I winners like Cuvee (Carson City), Pyro (Pulpit) and Olympio (Naskra) sprinkled all over his catalogue page, and the product of a stakes-placed Tapit mare to boot, the Winchell family will be very well-represented by blue-blooded homebred and 'TDN Rising Star' Pneumatic (Uncle Mo) in Saturday's Belmont.

Pneumatic's fourth dam is foundation mare Carols Christmas (Whitesburg), who was claimed for just $25,000 by the late Verne Winchell in 1981.

“Mr. Winchell was sitting at his desk one day looking at the Racing Form and just decided, 'I'm gonna go claim this mare.' She had some of the worst confirmation, she hooked in at her ankles in front, both knees were offset, and she was horribly swayback. But she was a good-sized mare and she had a pretty head. She was actually pretty fast, though, and that's what kind of attracted him to her.”

He continued, “She produced Olympio, who could've been 3-year-old champion in his year and [graded winner] Call Now (Wild Again), who was the third best 2-year-old in her crop behind Flanders and Serena's Song. But where she really made her mark was four of her daughters who never earned any black-type went on to produce and produce and produce. Four of them were graded stakes producers and it just exploded from there.”

Pneumatic earned his Rising Star badge with a visually impressive late run going a mile at Oaklawn Apr. 11, then battled throughout after drawing the rail en route to a solid third-place showing in the GIII Matt Winn S. at Churchill Downs May 23.

Also under consideration for the GIII Ohio Derby June 27, Pneumatic punched his ticket to New York with a five-furlong bullet in :59 4/5 (1/14) at Hall of Famer Steve Asmussen's Churchill Downs base June 8.

What would it mean to add a Classic win to this storied family from Pneumatic?

“It would be like the cherry on the sundae,” Fiske replied.

Seven-time Eclipse Award-winning trainer Todd Pletcher will have a pair of chances to capture his fourth win in the Belmont.

Dr Post (Quality Road), fourth in his Belmont unveiling behind subsequent GSW & GISP Green Light Go (Hard Spun) going 5 1/2 furlongs last summer, has been perfect in two attempts at three, led by a tenacious score while making his route debut in the Unbridled S. in Hallandale Apr. 25. Dr Post, a $400,000 KEESEP yearling purchase by Vinnie Viola's St. Elias Stable, is listed as the third choice at 5-1 on the morning line.

“In Dr Post's case, he's really a beneficiary of the change in schedule and I think under a traditional Triple Crown calendar, he would've probably been just behind schedule a little bit,” Pletcher said. “We were unsure like everyone else of exactly when New York would be able to reopen, but we also had an idea that should it reopen, that they might have to cut the distance of the Belmont. So after Dr Post won the Unbridled, this became our target. We've been very happy with the way he's trained and progressed. This is a big class test against some really high-quality horses, but he's been indicating to us in his training that he's that kind of horse as well.”

The stretch-running Farmington Road (Quality Road) sprinkled in a second-place finish in the Oaklawn S. Apr. 11 between a pair of fours in split divisions of both the GII Risen Star S. Feb. 15 and GI Arkansas Derby May 2, respectively.

“Belmont is home for us and the Belmont S. always takes on special meaning,” Pletcher said. “It's traditionally the third leg of the Triple Crown and such a prestigious race, and to be able to participate in it a number of times and be fortunate enough to win it three times, it's one of our stable's favorite races and list it up there very high on the races you hope that you could possibly win.”

Woody Stephens may be smiling somewhere if either Tap It to Win (Tapit) or Sole Volante (Karakontie {Jpn}) are covered in white carnations Saturday evening.

Live Oak homebred Tap It to Win, two for two this term for newly minted Hall of Famer Mark Casse, couldn't have been more impressive running a salty group of allowance runners off their feet going 1 1/16 miles at Belmont June 4. He earned a 97 Beyer Speed Figure for the effort.