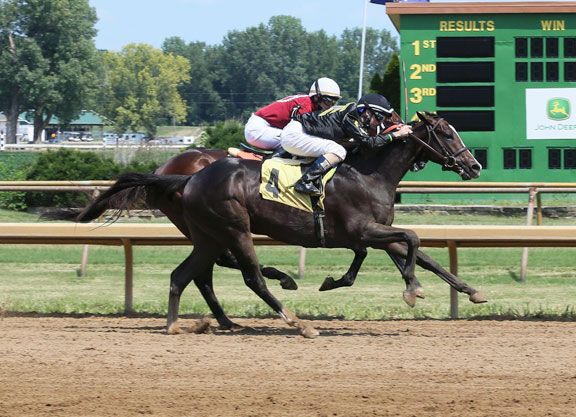 Calumet Farm's Everfast (Take Charge Indy), a fast-finishing longshot second in the GI Preakness S., completed serious preparations for a start in Saturday's GI Belmont S. when working five furlongs in 1:01 flat (7/16) Monday morning at Churchill Downs. The Dale Romans trainee clocked splits of :12.80, :24.40 and :48.60 seconds before galloping out six furlongs in 1:13.60 and seven panels in 1:28 flat under exercise rider Faustino Aguilar. The colt previously worked a half-mile in :50 1/5 (23/35) just five days prior at Churchill.

“Everfast worked great today,” Romans said. “It's a mile and a half race, so we crammed two works back to back to make sure he is plenty fit. The way he worked out there this morning, he looked great. He went even early and finished fast and didn't want to pull up, which might be key going into the Belmont.”

Elsewhere, Michael and Jeff Fazio's Joevia (Shanghai Bobby) was confirmed as a Belmont starter by trainer Gregory Sacco. Demoted to 11th after interfering with horses on the first turn of the GII Wood Memorial S., the dark bay rebounded to capture the Long Branch S. May 12 at Monmouth. Jose Lezcano will ride.

Tax (Arch), 14th in the GI Kentucky Derby last out, is also slated to start in the Belmont, according to trainer Danny Gargan. The gelding drilled four furlongs in :49 flat (33/68) Saturday at Big Sandy. Irad Ortiz, Jr. will have the call.