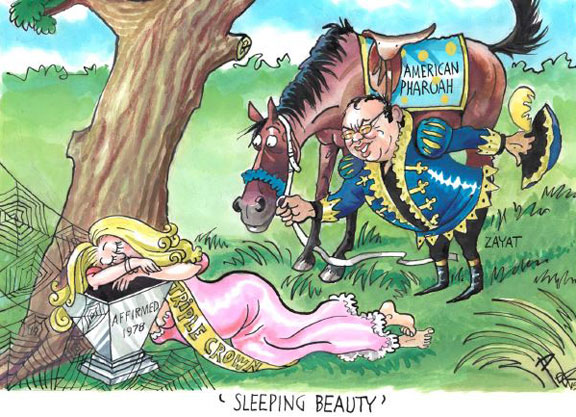 Bellocq, 94, was born in France in 1926. At age 19, the French racing journal France Courses gave him national exposure by publishing one of his cartoons of a jockey. Bellocq signed the drawing as “Peb,” a signature that became his lifelong moniker. By 1954, Bellocq's work had achieved international acclaim and he was contracted by Laurel Park owner John D. Schapiro to do drawings for the prestigious Washington, D.C. International Stakes. Bellocq decided to relocate to the United States and in 1955 accepted an offer to work as the staff cartoonist for the Morning Telegraph and its sister paper, the Daily Racing Form, a job he held until December 2008.

“My father was a jump jockey in the south of France and my grandfather was a trainer. His father was a breeder. I was among horses right from the start,” Bellocq said.

Along with his work for the Form, Bellocq has been commissioned by numerous racetracks to produce vibrant murals capturing the flavor of the sport. His large-scale cartoon collages became fixtures at tracks such as Churchill Downs, Del Mar, Arlington, Oaklawn, Aqueduct, and The Meadowlands.

“He had a tremendous knowledge of Thoroughbred racing,” said the late Whitney Tower, who worked with Leggett at Sports Illustrated for nearly 20 years. “He was an exceptional man, a great talent, and he contributed a lot to the success of Sports Illustrated. He knew his way around. The trainers respected him. He was very popular.”

In 1993, Leggett was one of the eight inaugural members of the Saratoga Springs Sports Hall of Fame. He died in 1996 in New York City at the age of 64.