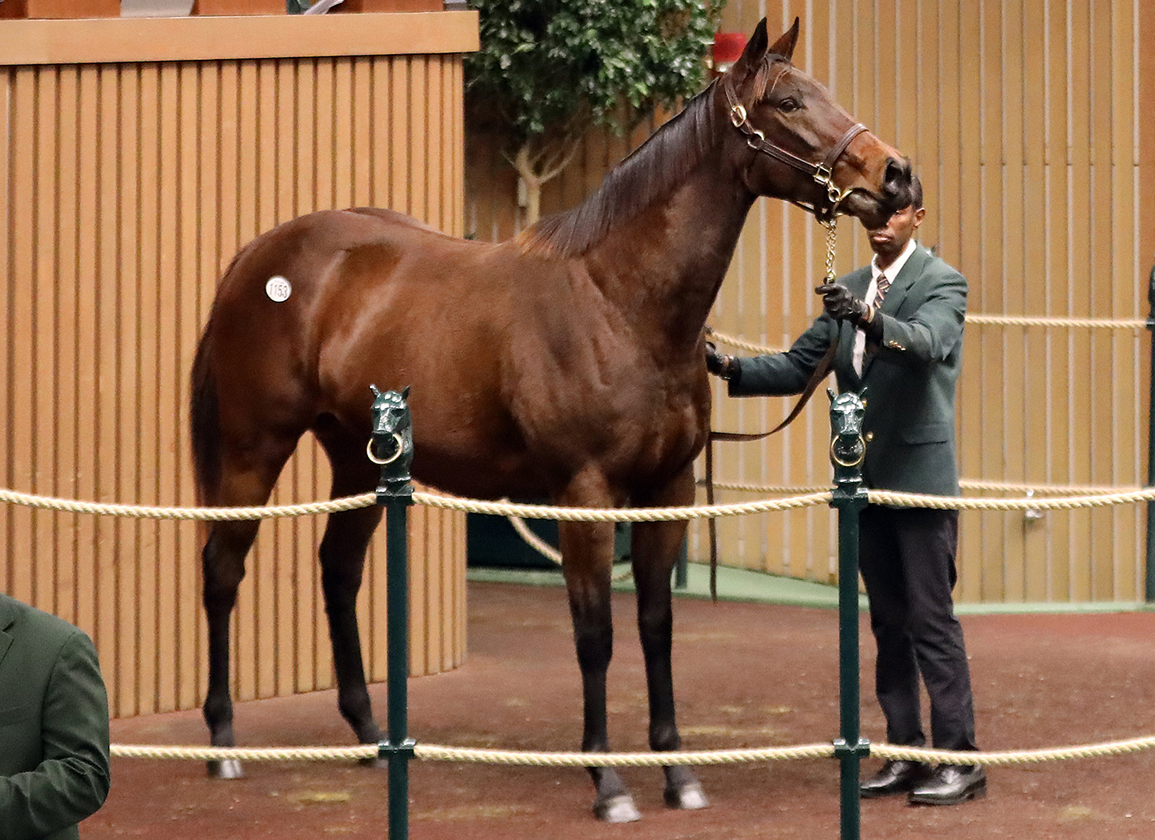 LEXINGTON, KY – With Godolphin's Belle Street (Street Sense) leading the way at $550,000, the Book 3 section of the Keeneland November Breeding Stock Sale opened Saturday with strong results as the 10-day auction continues to track well ahead of 2020 figures.

The unraced Belle Street, who sold to Gary Broad, was one of 15 mares sold by Godolphin Saturday for gross receipts of $2.17 million.

“It's the same with everything we've had go through the ring so far,” said Godolphin's Michael Banahan. “You can probably put an extra 20, 30, 35% on top what we were valuing the mares at. It's just been an unbelievably strong market.”

“It's been strong. It's been very strong,” Potter said. “Especially at Fasig and here the first few days. We were really frustrated going into the second day trying to get something bought. But it's great for the business. I love to see it thriving like this.”

Peter O'Callaghan purchased the session's top-priced weanling, going to $210,000 to acquire a daughter of Nyquist (hip 1183) from the Taylor Made Sales Agency consignment.

“She was our pick of the day,” O'Callaghan said of the pinhooking prospect. “I thought we would get her for a couple of bids less and we were hoping to get her for less than $200,000. That was absolutely our last bid.”

Of the foal market at Keeneland this week, O'Callaghan said, “It's extremely competitive for those top foals. There was plenty of racing money here early and some strong pinhooking groups, so whatever you value them at, even if you value them generously, you almost have to add $50,000 to it. So it's tough. We bought fewer foals and our expenditure might be even more than last year. It doesn't make for a good sum, but it is what it is. We just keep moving on.”

The unraced Belle Street (Street Sense) (hip 1153), a half-sister to Eight Belles (Unbridled's Song) and in foal to the late Bernardini, drew a crowd of admirers before selling for $550,000 to the bid of Gary Broad of Walmac Farm.

The 3-year-old mare was bred and consigned by Godolphin and was the highlight of an offering of 15 mares from Sheikh Mohammed's operation which sold for $2.17 million at Keeneland Saturday.

“She is a good-looking mare from a very good family,” Godolphin's Michael Banahan said of Belle Street. “With the market that is in here, we didn't anticipate that she would bring that kind of money, but it's been so strong here since the sales started at Fasig. She deserved to make plenty of money, but again she made well over what we would have valued her at and what her reserve was.”

Belle Street was one of nine mares Godolphin sold Saturday in foal to its champion Bernardini, who passed away in July. That group, which also included the $215,000 Tactical Move (First Defense), grossed $1,525,000.

Bernardini has earned a reputation as a stellar broodmare sire and Banahan said many potential buyers were hopeful of buying mares carrying fillies by the late stallion.

“We don't fetal sex any of our mares and everybody wants to know if they are carrying a filly or not,” Banahan said. “That's the reason they want to buy these mares in foal to him. He's been a fantastic stallion for us and he's turned into an unbelievable broodmare sire. Everyone is trying to get a filly out of these mares. But his colts aren't too bad either on the racetrack.”

Godolphin's offerings Saturday were a normal part of maintaining the operation's broodmare band, according to Banahan.

“It's part of what we do every year, just trying to streamline our broodmare band,” he said. “We have to keep the quality as best we can at the top.”

Among buyers who have had success buying from Godolphin in past Keeneland November sales is the O'Farrell family's Ocala Stud, which purchased Indelible (Tiznow), a half-sister to Godolphin's 2020 champion juvenile Essential Quality (Tapit), for $130,000 at the 2019 November and resold her Tuesday at Fasig-Tipton for $1.6 million.

“Anytime we have brought mares to sale, people are very keen to try to get into the Godolphin families,” Banahan said. “They have done very well for other people as well. We are going to keep 'X' amount of mares and keep the quality up as much as we can. And that's a matter of culling some mares and some of them are going to turn into very valuable commercial mares for other people as well. Buying mares from any of the great owner/breeders–which Godolphin would be one–everyone is drawn to those families because you can't get into them. There are great opportunities getting into them. Maybe they skip a generation, but they are usually there and they will come back again. And that's why they are so popular.”

Essential Quality (Tapit), meanwhile, is back home at Jonabell Farm and preparing to start his stud career next year.

“He's been busy and settled in very well,” Banahan said of the champion. “He's a fantastic horse to have on the farm again. He's been shown the last couple of days and he's like a professional out there. We are very proud of him and I think he'll have a great career as a stallion. We are excited to have him out there.”

Essential Quality's dam Delightful Quality is currently in foal to Tapit and is expected to be bred back to that Gainesway stallion next year. Her 2-year-old Famed (Uncle Mo) was tabbed a 'TDN Rising Star' after her maiden score at Churchill Downs Oct. 30 and the Brad Cox-trained filly is expected to make her next start in the Nov. 27 GII Golden Rod S. at Churchill, according to Banahan.

Larkin Armstrong signed the ticket at $340,000 to acquire the 12-year-old mare Trophy Wife (Giant's Causeway) (hip 1083), in foal to Mastery, from the Claiborne Farm consignment Saturday at Keeneland.

“It's a wonderful family and [Gainesway owner] Antony Beck loved her,” Armstrong said. “We thought it was a great opportunity to get into an amazing family.”

Bred by Phipps Stable, Trophy Wife is a daughter of

“We loved Guarana and Magical World,” Armstrong said. “They obviously brought several million each. Hopefully we can get some nice foals from this mare.”

Larkin was back in action for Gainesway late in Saturday's session, purchasing Pink Caddy (El Padrino) (hip 1403) for $240,000 from the Taylor Made Sales Agency consignment.

Town and Country Farms added Tactical Move (First Defence) (hip 1060) to its broodmare band when farm president Shannon Potter signed the ticket at $215,000 early in Saturday's fourth session of the Keeneland November sale. From the Godolphin consignment, the 4-year-old mare sold in foal to the late Bernardini. She is a daughter of Grade I winner Game Face and a half-sister to graded-placed Coliseum (Tapit).

“She has a really good pedigree and we like the physical,” Potter said of the mare's appeal. “And she's in foal to a horse who's no longer with us. We really like Bernardini. So we are trying to get a few more before they are all gone.”

“We are selling quite a few mares here at the sale, just trying to cull out some, and add to the top,” Potter explained.