Bellafina Tunes Up at Oaklawn 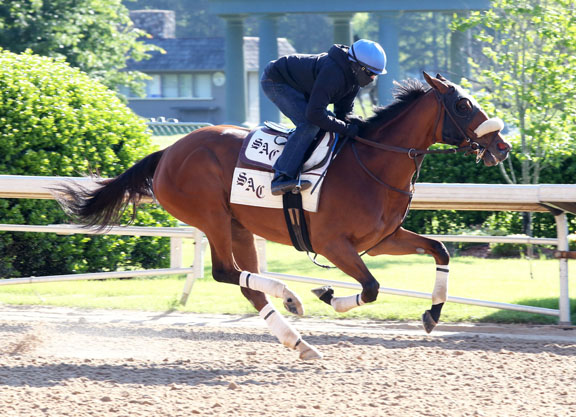 Bellafina (Quality Road), tuning up for the Apr. 25 Carousel S. at Oaklawn Park, worked four furlongs in :47.80 (20/105) under Joe Talamo at the Hot Springs oval Saturday morning. Clockers caught the 4-year-old filly with a final quarter-mile of :23.60 and galloping out five furlongs in 1:00.20.

“Unbelievable,” Talamo said after getting on Bellafina for the first time. “Absolutely skipped over the track this morning.”

Bellafina, who shipped in from trainer Simon Callaghan's Southern California base Tuesday, was having her first work over the Oaklawn track Saturday. The three-time Grade I winner has been off since finishing second in the Dec. 28 GI La Brea S.

Also working Saturday morning toward the Carousel was Mia Mischief (Into Mischief), who breezed a half-mile in :49.20 (66/105) for trainer Steve Asmussen. Winner of last year's GI Humana Distaff S., the 5-year-old mare captured a Mar. 20 optional claimer at Oaklawn in her first start for Stonestreet Stables after selling for $2.4 million at the Fasig-Tipton November sale.

Shedaresthedevil shared the five-furlong bullet with GIII Southwest S. winner Silver Prospector (Declaration of War), who is pointing for the May 2 GI Arkansas Derby. The sophomore is coming off a sixth-place effort in the Mar. 14 GII Rebel S.