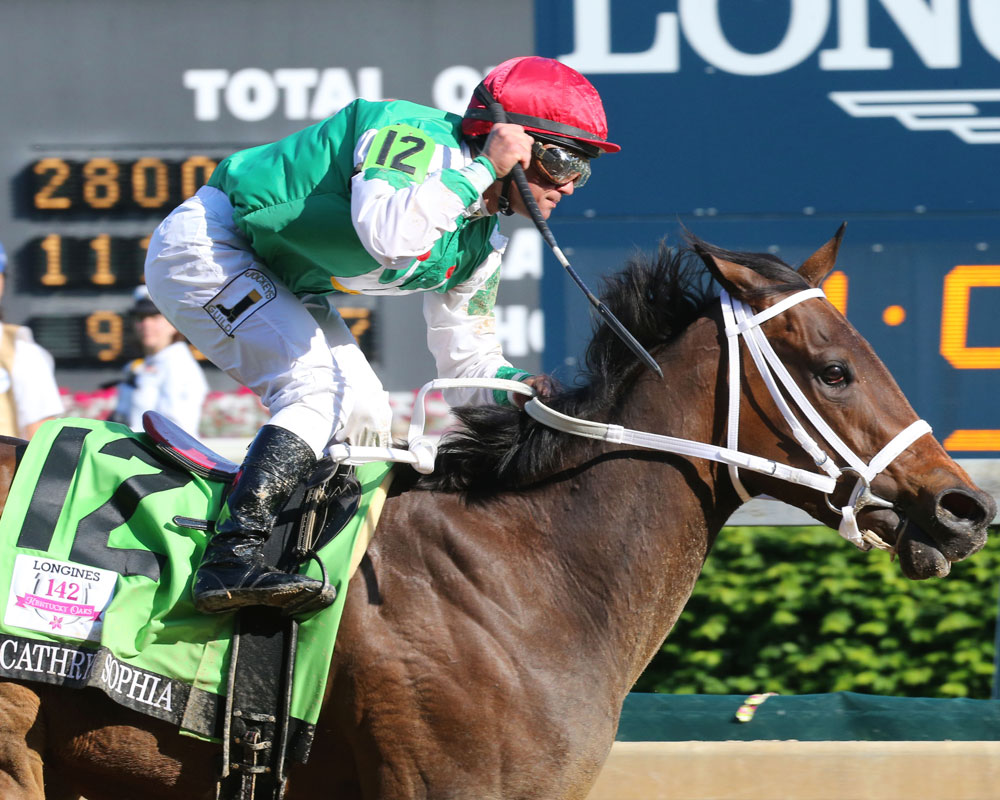 Before the Hammer is a series presented by Keeneland that spotlights consignors, their stories of success and their featured offerings at the upcoming Keeneland November Breeding Stock Sale.

Bedouin Bloodstock's Conor Doyle and Neal Clarke have generally flown under the radar in recent years. That's right in line with their affable, low-key demeanors. But if that's the aim, it's going to be tougher to do if they keep bringing to market the sort of group they'll take to the Keeneland November Sale Nov. 7-18.

The Bedouin consignment will include a pair of young Grade I-winning mares carrying their first foals, and both, as it turns out, on February covers to Pioneerof the Nile. The 4-year-old GI Kentucky Oaks heroine Cathryn Sophia (Street Boss) goes through as Hip 30, followed by the 5-year-old Her Emmynency (Successful Appeal), who is cataloged as Hip 56.

“You look at her, and she looks like a speed ball,” Clarke said of Cathryn Sophia, who also won the GII Forward Gal S. and GII Davona Dale S. “But she was an incredibly fast filly who could carry it over a distance of ground. She's just tough as nails.”

Her Emmynency also showed speed and versatility. She was beaten just a neck when second in the GI Del Mar Debutante on the main track at two, then moved to the turf course to beat Miss Temple City (Temple City) by a head in the 2015 GI Queen Elizabeth II Challenge Cup at Keeneland.

Bedouin is selling Cathryn Sophia and Her Emmynency on behalf of SF Bloodstock, which bought both mares as maidens a year ago and sent them to the WinStar standout.

“We've had a lot of Pioneerof the Niles in recent years, and we're just so impressed by his young horses,” Doyle said. “They can come in different types, but uniformly, they have an effortless walk with inexplicable ease. They just glide. And I think people who are interested in these mares will be mindful of that. It's a great mating for each of them.”

Clarke and Doyle are no strangers to success in the Keeneland ring. They sold the Grade I winners Condo Commando (Tiz Wonderful) and Mshawish (Medaglia d'Oro) as September yearlings, and have further raised and/or sold such standouts as Acapulco (Scat Daddy), Broken Sword (Broken Vow), Chocolate Ride (Candy Ride {Arg}), Inside Straight (Super Saver), Killer Graces (Congaree), and Money Multiplier (Lookin At Lucky).

Bedouin has been anything but an overnight success for Clarke and Doyle, both children of the '60s who grew up near Dublin. Doyle's father owned High Street bookmaking shops, and he gained an interest watching the races through the day and learning to handicap. In the early '90s, Doyle got a green card through a lottery and, having never worked with horses before, entered Taylor Made's intern program for 18 months.

Clarke had arrived earlier, in 1987, and had more experience growing up. He learned to ride and worked for a trainer for a tie. Between high school and college, he saw an ad in a local paper for the same Taylor Made program. On a whim he signed up, and after completing the course and returning home for college, he settled down once again in Kentucky.

The men met in a shedrow working for Taylor Made at the now-defunct Keeneland July Sale in 1995, became friends, and three years later launched Bedouin.

“We were pinhooking a little bit, and it was primarily a vehicle to sell our own stuff,” said Clarke. Success in those ventures gave the men capital to invest in mares and their own property–the Lexington-based Atlas Farm–where they began boarding for clients, as well.

“We were just trying to have an iron in every fire, you know?” said Clarke.

Clarke and Doyle quickly earned a reputation for their horsemanship, and in 2009, were approached by Tom Ryan about boarding for the emerging SF Bloodstock, which had made several astute purchases in the market downtown.

“I remember Tom coming up to me at a sale and saying he had something that was starting out, and asked if we'd be able to take a couple of mares,” said Doyle. “And it just morphed from there.”

In 2010, Bedouin sold its first seven-figure horse, the broodmare Love To Dance (Ire) (Sadler's Wells), on behalf of SF, and in 2013, notched its second with the SF-bred, session-topping September yearling War Ride (Unbridled's Song–Irish Smoke), who commanded $1.1 million. Also for SF, they raised and sold, privately, the GI Kentucky Oaks second Shook Up (Tapit).

These days, Atlas has about 30 mares for SF, as well as foals and yearlings.

“They're a very important client, and they're great to deal with,” said Clarke. “They trust us, and they let us do our job.”

“And it's just great to have these quality horses around” added Doyle. “You spend so many years aspiring to have that, and then when they're there, it's makes the day-to-day stuff so much more pleasurable.”

Among the SF-owned broodmares who is boarding at Atlas Farm in the lead-up to November is Paola Queen (Flatter), the GI Test S. winner who sells as a broodmare prospect through Elite Sales as Hip 297.

“Paola Queen is one of the most extraordinary physicals I've ever seen,” said Doyle. “I've not seen too many females built like that. She's a Grade I-winning sprinter, and she looks like it. She's immensely powerful.”

Bedouin's November draft includes a number of top weanling prospects, led by an SF-bred colt by Pioneerof The Nile–Hooh Why that sells as Hip 60.

The November Sale begins hot off the heels of a record-breaking September Yearling auction. That bodes well for the bloodstock market. But it wasn't just the prices that has the Bedouin lads feeling optimistic.

“In my mind, more new people have come into this industry in the past three years, spending vast amounts of money, than I've seen in any three-year period over the last two decades,” said Clarke. “It just feels like there are whole new buying groups that are interested. The foal crop is where it needs to be, and there are some areas of racing that are looking really, really good. Saratoga was fantastic, and I think the Keeneland meet is going to be amazing. People want to race horses and are having fun, so why not? I think it's going to be a great market.”