Bears Watching, Half Bro to Code of Honor, Gallops at Gulfstream 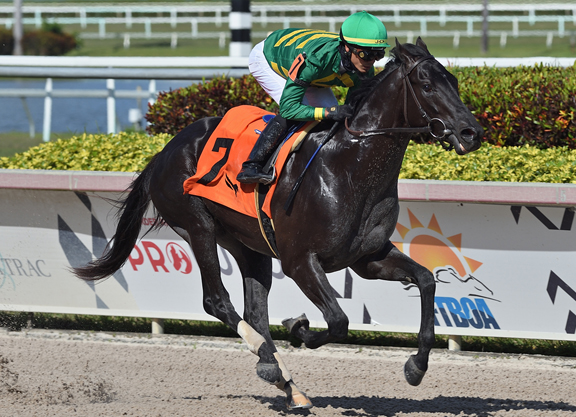 7th-Gulfstream, $45,000, Msw, 3-13, 3yo, 7f, 1:22.95, ft, 7 3/4 lengths.
BEARS WATCHING (c, 3, Karakontie {Jpn}–Reunited {GSW, $326,771}, by Dixie Union) continued to live up to his moniker, building on a strong debut third–two spots ahead of subsequent 'TDN Rising Star' Collaborate (Into Mischief)–in the local slop Feb. 6 to dismantle an overmatched group of Gulfstream maidens Saturday afternoon. Speedy enough to argue the pace through the early exchanges, the 3-5 pick was eased back out of a potentially tight spot to stalk the pacesetters while racing on his lonesome in fourth. Going nicely on the turn and in need only of somewhere to run, Bears Watching was tipped out into the four path at the quarter pole and ran up the score from there, scoring by 7 3/4 lengths over Gran Runner (Runhappy) in racehorse time. Bears Watching is a half-brother to these connections' Code of Honor (Noble Mission {GB}), MGISW, $2,731,320, who won the 2019 GII Fountain of Youth S. over the Gulfstream main track before going on to add the GI Runhappy Travers S. and GI Jockey Club Gold Cup later that season; and Big League (Speightstown), GSP, $318,806. Reunited's most recent produce is a Honor Code colt of 2019.  Lifetime Record: 2-1-0-1, $30,600. Click for the Equibase.com chart or VIDEO, sponsored by Fasig-Tipton.
O/B-William S. Farish (KY); T-Claude R. McGaughey III.