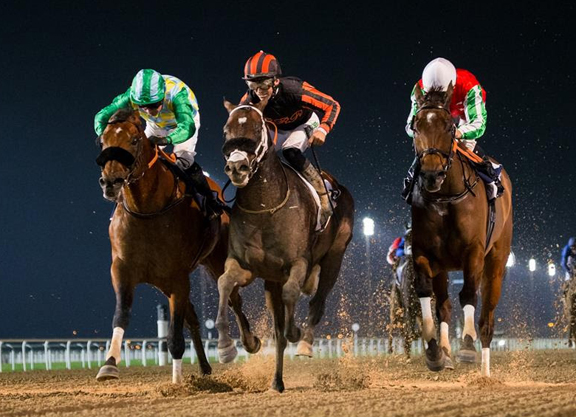 The G2 Al Maktoum Challenge R1, run over a mile on the Meydan main track was a nailbiter, but Kimbear (Temple City) got his head down on the line where it counted, winning a three-way photo over GSW Secret Ambition (GB) (Exceed And Excel {Aus}) and Group 1 winner North America (GB) (Dubawi {Ire}).

Racing in the rear of the main pack against the fence as Heavy Metal (GB) (Exceed And Excel {Aus}) showed the way initially, the Doug Watson colourbearer began to improve as North America took over, with Heavy Metal relegated to second on the bend. Kimbear followed directly behind North America and slid out to engage the rallying Secret Ambition a quarter mile from home. That duo appeared to be battling for second, but the leader was coming back to them inside the final 100 metres and all three horses hit the line as one. The final margins were a short head between Kimbear and Secret Ambition and an equal margin back to North America on the fence.

“He was very brave today,” said winning jockey Pat Dobbs. “He was following [North America] and hit a flat point turning in. Then he got a second wind and stuck his head down at the line. Luckily our head was down at the line. His work has been exceptional at home. I didn’t think he’d get beat last time. Doug [Watson] is a brilliant trainer. He knows how to get them to progress through the year. You’ve got to tip your hat to him.”

Added Watson, “He ran a great race. He likes a fight. Last year was such a struggle and this year he has just done everything right. Those are two nice horses that he just finished with and we were lucky to get away with that. Pat gave him a great ride. He was fit today and his works were fantastic. He always needs that first run. I was little worried with it being three weeks back [after the Listed Dubai Creek Mile.] We’ll give him a nice break now. It’s a great win for Sheikh Rashid. He bought this horse a couple years ago and last year wasn’t his year. Hopefully it is this year. I was really pleased with Muntazah (GB) (Dubawi {Ire}). It’s tough to come back being a big heavy horse. He dug in there and finished fourth.”

Pedigree Notes
The dark bay is one of eight graded/group winners out of 14 overall black-type winners for his Spendthrift Farm-based sire. The first foal out of his GSP dam, Kimbear is one of three winners from three to race. Sky Dreamer was covered by both Violence and Mo Tom last spring.