BC Berth On Line in Shoemaker Mile 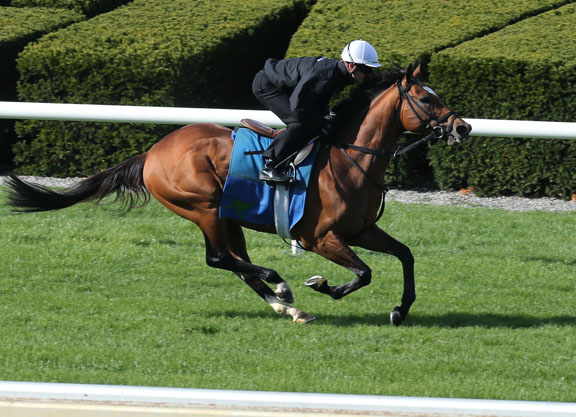 A hard-to-separate field of seven compete for an automatic berth into the GI Breeders' Cup Mile in Saturday's GI Shoemaker Mile in Arcadia. East Coast invader Heart to Heart (English Channel) nearly got his elusive Grade I when second by a neck in Keeneland's Maker's 46 Mile last time Apr. 14, and there's another runner back from that heat who his connections probably wish had skipped this spot. Heart to Heart does his best work when loose on the lead, but had to concede the early advantage in the Maker's 46 to What a View (Vronsky), who faded to sixth after setting a fairly honest pace. What a View, winner of last year's GI Frank E. Kilroe Mile, bounced back in the restricted Cal-bred S. over course and distance May 20.

Bolo (Temple City) was somewhat surprisingly the 38-10 favorite in the Maker's 46, but checked in ninth with no obvious excuse. A winner of the GII Arcadia S. here in back-to-back years, he was third behind Bal a Bali (Brz) (Put It Back) and What a View in the Mar. 11 Kilroe. The 5-year-old was most recently upset by Farhaan (Jazil) in the GIII Thunder Road S. Apr. 29.

Bal a Bali is another one with in-and-out form. An impressive winner of the 2015 GIII American S. here in his U.S. debut, he earned just one optional claiming win and was beaten eight times at the graded level through his abbreviated 2016 campaign. The Southern Hemisphere 7-year-old belied 9-1 odds when seemingly back on track in the Kilroe, but settled for fifth against what was probably tougher in Churchill's GI Woodford Reserve Turf Classic S. May 6.

Free Rose (Munnings), winner of the GIII La Jolla H. and GII Del Mar Derby last term, found a tough spot to make his 4-year-old debut. The Richard Baltas trainee has been off since finishing third in the Dec. 3 GI Hollywood Derby, but he's been working swiftly on the dirt for this.