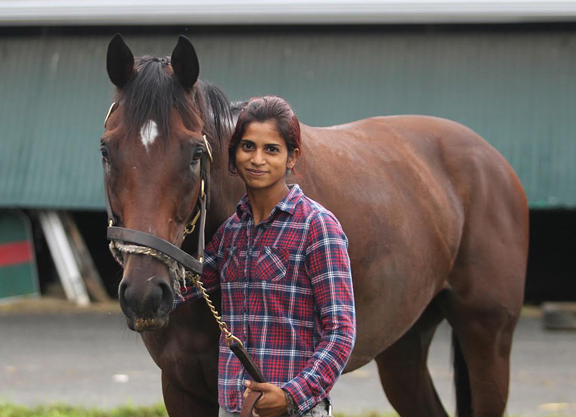 Aparna Battula, the jockey-turned-trainer who has not started a horse since New Jersey Racing Commission (NJRC) investigators confiscated 83 injectable medication vials and 36 needles from her Monmouth Park tack room July 29, 2019, had her training license suspended 2 1/2 years and was fined $7,500 in a post-appeal commission ruling on those violations during the board's May 19 meeting.

Commissioners voted 4-0 to impose a penalty that was slightly stiffer than the two-year ban and $6,500 fine recommended by a New Jersey administrative law judge (ALJ) after Battula had appealed her original suspension.

But the new penalty pales in comparison to the nine-year suspension and $18,500 fine the Monmouth stewards originally voted to impose in a June 2020 ruling against Battula.

During Wednesday's NJRC meeting, executive director Judith Nason said the commission had withdrawn one charge at the appeal stage “because a confirmatory test for a substance came back negative.” The Asbury Park Press subsequently reported that the purported drug had been initially believed to be erythropoietin (EPO), which carried a five-year suspension and $5,000 fine. Nason also said the ALJ merged several other counts into one for the purposes of determining penalties.

Nason read into the record that testing confirmed the other confiscated vials contained flunixin, dexamethasone and methocarbamol. Nason said that Battula had admitted in interviews with investigators that the illicit pharmaceuticals were hers, and Nason said the trainer had admitted to injecting one horse, Banker's Island (Shackleford), with banamine and ACTH at Monmouth prior to the raid on her stable.

When caught with the contraband, Battula had been about to start a 15-day ban resulting from a separate dexamethasone positive incurred May 19, 2019, at Monmouth.

“Although the final decision accepts most of the ALJ's findings and conclusions, it rejects the ALJ's use of the criminal merger doctrine and her recommended penalties,” said NJRC chair Pamela Clyne, reading the proposed motion prior to the vote. “The final decision finds that the appropriate penalties for possession of the vials, needles and drugs are a one-year and six-month suspension and a $5,000 fine.”

Clyne continued: “The final decision also adopts the ALJ's imposition of a one-year suspension and a $2,500 fine for injecting the horse at Monmouth Park in July 2019. Considering the trainer's penalty history, which includes two other drug positives, the final decision concludes that the appropriate penalties in this matter are suspensions totaling two years and six months and fines totaling $7,500. Finally, the final decision also clarifies that the rule prohibits possession of the injectable bottles as well as possession of the prohibited drugs that may be in them.”

Battula's attorney had argued that the drugs were planted by a disgruntled former employee.

According to a 2013 Horse Illustrated profile, Battula, a North American Racing Academy attendee, had been the first female from India to earn a jockey's license in America after having attained a bachelor's degree in biotechnology in India.