Battle of the Unbeatens in the Satsuki Sho 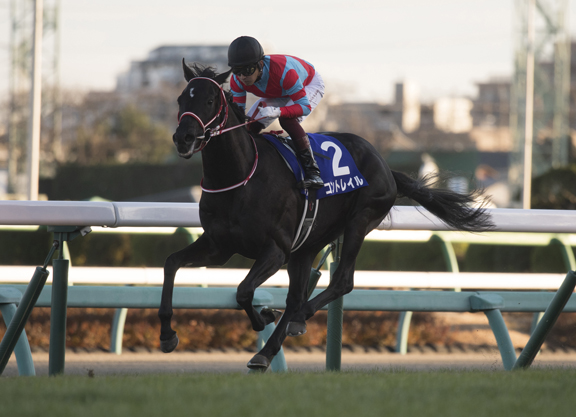 The Japanese colts' Classics kick off this weekend at Nakayama Raceourse, where champion Contrail (Jpn) (Deep Impact {Jpn}) and Salios (Jpn) (Heart's Cry {Jpn})–each perfect in their three starts last season–square off in the G1 Satsuki Sho (Japanese 2000 Guineas) over the 2000 metres.

Racing in the colours of Shinji Maeda and bred by the family's North Hills Co. Ltd., the dark bay colt graduated at first asking going nine furlongs last September and followed up with a dominating five-length victory in the G3 Tokyo Sports Hai Nisai S. Nov. 16. Sent off the even-money favourite for the season-ending G1 Hopeful S. over Sunday's course and distance, Contrail raced prominently throughout and quickened home to post a 1 1/2-length defeat of Weltreisende (Jpn) (Dream Journey {Jpn}) (see below, gate 2).

“He's a horse that starts well and is able to get a position, so I don't worry about anything with him,” said jockey Yuichi Fukunaga of his ride, who has drawn gate one. “The Nakayama track is a bit different from others, but he's already won there. It'll be a tough race, with the other Grade 1 winner and other strong horses, but I want to get the best result.”

Contrail is one of four in the race for 2005 Satsuki Sho winner Deep Impact, who has since sired Dee Majesty (Jpn) and Al Ain (Jpn) to wins in 2016 and 2017, respectively.

Salios carried Australian jockey Damian Lane to a debut victory on the G1 Yasuda Kinen undercard at Tokyo last June ahead of a stalk-and-pounce success in the G3 Saudi Arabia Royal Cup at headquarters Oct. 5. Ryan Moore was at the controls when Salios proved 2 1/2 lengths best in the G1 Asahi Hai Futurity Dec. 15 (video, gate six) and he tries a distance beyond the metric mile for the first time Sunday, with Lane back in the boot.

My Rhapsody (Jpn) (Heart's Cry {Jpn}) quietly put together a three-race skein of his own last season, capped by a two-length tally in the G3 Kyoto Nisai S. going this trip in late November. The son of U.S. GISW Teddy's Promise (Salt Lake) caught what appeared to be easy ground in his seasonal return in the Feb. 16 G3 Kyodo News Hai and had too much to do late, finishing fourth to Darlington Hall (GB) (New Approach {Ire}) and Bitterender (Jpn) (Orfevre {Jpn}). The latter's sire won this event when it was held at Tokyo in 2011, seven weeks after a devastating earthquake and tsunami struck Japan.

Satono Flag (Jpn) (Deep Impact {Jpn}) cost prominent owner Hajime Satomi ¥165 million (US1.48 million) as a foal at the 2017 JRHA Select Sale and the colt has earned back a fair bit of that investment. His three wins to date include a 1 3/4-length score in the G2 Deep Impact Kinen (2000m) at this venue Mar. 8.

WATCH: Contrail locks up a championship in the Hopeful S.