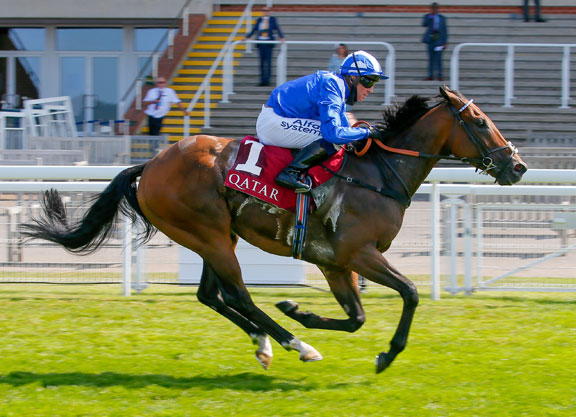 His odds were 2-7 and that proved generous as early as halfway as Shadwell’s Battaash (Ire) (Dark Angel {Ire}) pulled off a historic fourth victory in Goodwood’s G2 King George Qatar S. on Friday. Recording his fastest time (55.62) in the race in the process, the G1 Nunthorpe S., G1 King’s Stand S. and G1 Prix de l’Abbaye hero was shadowed by last year’s G1 Prix de l’Abbaye winner Glass Slippers (GB) (Dream Ahead) but was comfortably on top at the line to score by 2 1/4 lengths, with Ornate (GB) (Bahamian Bounty {GB}) a neck away in third as he replicated his position in this 12 months ago. Dragged along by the fastest horse in Europe, the next two home also broke his previous track record.

“He was good, just getting a bit lonely out in front but it’s very hard to find horses quick enough to lead him,” Jim Crowley commented. “He was in front a long way and was just idling, so I had to give him a couple of taps just to keep his mind on the job. He’s so fast and very consistent now. If a horse wants to take him on in a race then good luck to them. He’s so quick he burns them off from halfway.”

Battaash’s achievement in bringing up four wins in this is nothing short of remarkable and history bears that out as fact. Of all the current group 1 and group 2 sprints in operation, he is the only one to garner that amount of successes in the same race with only Fine Art (Fr) bettering it with his five victories in the Prix du Gros Chêne from 1942 to 1946. Post-war, he is out on his own and this was all the more meritorious in that he was slicing a decent fragment off his prior track record on terrain made to measure for his style. There have been very few who could go with him once he had done the damage travelling downhill and it took a fast Australian mare to make any kind of impact as Houtzen (Aus) (I Am Invincible {Aus}) became the sole rival to get within a length of him at the finish of this race last term.

When you are this good, the only one left to beat is yourself and in his younger days Battaash was guilty of doing that on the occasions that his hot temperament got the better of him. Each year, with consistent tender handling and love and attention, he has become ever more the finished article in terms of maturity and now wanders around the parade ring like an old sage. Having finally conquered York’s flat Knavesmire to win the Nunthorpe in August, he annexed a first King’s Stand on his latest start June 16 and has now set this benchmark which is unlikely ever to be met. He does not even need to blast from the outset any more, with Crowley opting to coast through the first 1 1/2 furlongs without the lead as the free-running French raider Ken Colt (Ire) (Kendargent {Fr}) managed to outspeed Ornate.

Charlie Hills was revelling in the moment as he tried to find expression for what he just seen. “He’s so talented and we’re very proud of him. To have a horse like him in the yard at six is amazing, to be involved with him means everything,” he commented. “Four consecutive group twos takes some doing, he’s not the biggest horse in the world but is so fast and well-balanced. He’s a true athlete. Further Flight, who my dad trained, is the only horse to win a pattern race five years on the trot so we might come back next year!”

Hills is looking at the familiar European sprint options now, but was also not ruling out a tilt at the Breeders’ Cup. “He’s not overly-raced and will have maybe two more runs this year,” he added. “We’re looking forward to the [G1] Coolmore Nunthorpe now and then probably the Abbaye, but it’s a strange year and no-one really knows what the future holds. He’ll go on until he tells us he’s not the horse he was today. I love America and it would be tremendously exciting if he did go.”

Kevin Ryan said of Glass Slippers, “She has run a blinder. I thought for a minute she was going to give him a race, but it is a great achievement by Battaash to win this race four years running. I’m delighted with our filly. It is a possibility we could look at the Nunthorpe, but she is in the [G1] Flying Five in Ireland and we wouldn’t mind going back up to six furlongs again in the [G1] Sprint Cup at Haydock. We always planned to run in the Sprint Cup, as she is as effective over six as she is over five furlongs. That could be an interesting race.”

Battaash is the first foal out of Anna Law (Ire) (Lawman {Fr}), who is a half-sister to four black-type performers including this operation’s Etlaala (GB) (Selkirk) who captured the G2 Champagne S. and was third in the G1 July Cup. Her other half-sibling Bird Key (GB) (Cadeaux Genereux {GB}) produced another leading sprinter in these silks in the G2 Duke of York S. winner and G1 Diamond Jubilee S. and G1 QIPCO British Champions Sprint S.-placed Tasleet (GB) (Showcasing {GB}). Anna Law also has Phoenix Thoroughbreds’ unraced 3-year-old filly Valletta Gold (Ire) (Gutaifan {Ire}) who is in training with John Quinn, and also the 2-year-old full-sister to Battaash who was bought by Shadwell for 800,000gns at last year’s Tattersalls October Yearling Sale Book 1. She is named Altaayshah (Ire) and is in training with Charlie Hills.