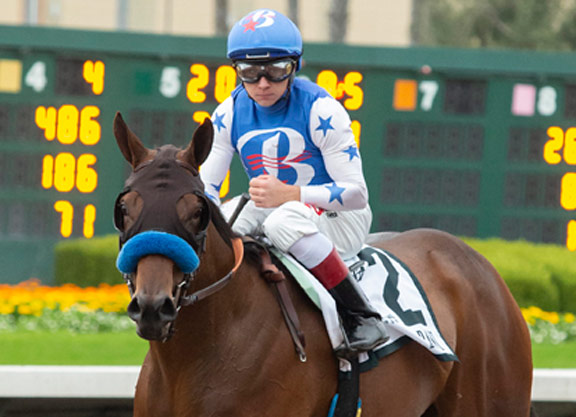 Bast secured her third Grade I victory of the season, defeating favored Donna Veloce in the GI Starlet S. at Los Alamitos. It was one of five wins on the day for Baffert, who also won the GII Los Alamitos Futurity S. It was also his third straight win in this particular event and sixth overall.

Bast was installed as the second choice behind Donna Veloce, who finished two lengths clear of her when a close second in the Nov. 1 GI Breeders’ Cup Juvenile Fillies, and it proved to be a two-horse race from start to finish. The $500,000 FTSAUG buy dictated terms with her favored rival breathing down her neck through a :22.80 opening quarter and a :47.22 half-mile. Bast showed the way into the lane with Donna Veloce glued to her outside shoulder and the two pulled well clear of the others down the stretch, but the favorite could not get by the Baffert runner, who won by a half-length.

“She was doing so much better for this race than she was before the Breeders’ Cup race,” Baffert said. “I think the race before [the GI Chandelier S.] took a lot out of her. She was training like she did at Del Mar. That day [at the Breeders’ Cup] was my fault. I told [jockey John Velazquez] to get her into the race early and she got involved with some fast fractions. She did well to hang on for third because that track was so deep and tiring. We knew when we got her on this dirt surface she would love it and she just bounced over it. Turning for home I was confident because she had been doing so well and her last work was so strong. She looked great in the paddock today.”

Baffert won five races overall Saturday, making him the first trainer to do since Thoroughbred racing returned to the venue in 2014.

“I thought all five of these horses were live, but usually that means you’re lucky if you win one,” the conditioner said. “You never know. It worked out well.”

Second on debut at Del Mar Aug. 11, Bast romped by 8 3/4 lengths next out in the GI Del Mar Debutante S. Aug. 31. She followed suit with a neck success in the GI Chandelier S. when trying two turns for the first time at Santa Anita Sept. 27 prior to completing the trifecta in the Breeders’ Cup.

Bast is one of eight Grade I winners for Uncle Mo, who is also the sire of Donna Veloce. She is also one of 24 graded winners and 45 black-type winners out of a daughter of the late Arch. She is the first foal out of Laffina, who sold to Eaton Bloodstock for $1.5 million carrying a foal by Ghostzapper at the recent Fasig-Tipton November Sale. Bast’s owners Susan and Charles Chu also purchased her yearling half-brother by California Chrome for $325,000 at this year’s Keeneland September Sale. Laffina’s weanling filly by Pioneerof the Nile preceded her into the ring at Fasig-Tipton, hammering for $430,000 to Giant Elf Bloodstock.