Basin Looks to Remain Perfect at the Spa 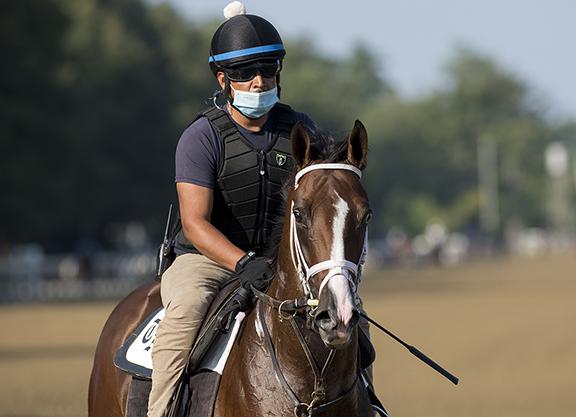 Basin (Liam's Map) is two-for-two at Saratoga so far in his young career and looks to extend that record and return to winning ways in the Spa's GII Amsterdam S. Saturday, which will be his first start for trainer Todd Pletcher. Previously trained by Steve Asmussen, the bay earned his diploma here at second asking last July and dominated the GI Runhappy Hopeful S. next out in September. Third to now-retired Grade I winner Nadal (Blame) in the GII Rebel S. in March, he was fourth in the nine-panel Oaklawn S. Apr. 11 and checked in second behind 'TDN Rising Star' Charlatan (Speightstown) in one division of the GI Arkansas Derby, but was awarded the winning purse when that rival was disqualified from the money for a lidocaine positive. Basin was last seen fading to 10th in the GII Toyota Blue Grass S. around two turns at Keeneland July 11.

“He's been training well and I've been pleased with his works,” Pletcher said. “We'll see how he responds to the cutback in distance.”

Long Weekend (Majesticperfection) won his first three starts of the year by just over 11 1/2 combined lengths, including the Mar. 21 Gazebo S. and Apr. 25 Bachelor S. His only loss this year came when a close third in a sloppy renewal of Belmont's Gold Fever S. July 10, but he was promoted to second after the DQ of the original runner-up.

“There's no secret to our game plan,” trainer Tom Amoss said. “He's very, very fast out the gate and we're going to try and use that speed. We were a little disappointed with how things turned out at Belmont with the track condition and not breaking well that day, which was very uncharacteristic of him. We thought he fought hard but was certainly compromised right at the start of the race. We're looking to make amends for that.”

The unbeaten Yaupon (Uncle Mo) takes a step up to black-type company in this event. A narrow debut winner at Churchill June 20, the $255,000 OBSOPN buy wired a track-and-trip optional claimer July 18, earning a 101 Beyer Speed Figure. The dark bay enters this test off a three-panel bullet in :37 flat (1/7) over the Oklahoma training track Aug. 24.