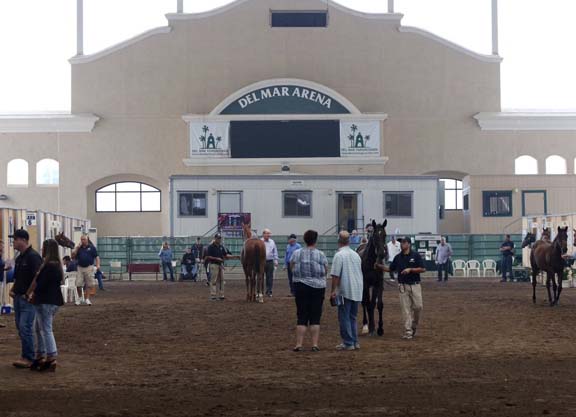 The Barretts Select Yearling Sale will be held for the third time Tuesday at Del Mar, with bidding slated to begin at 2 p.m. A total of 88 yearlings have been catalogued for the one-session sale.

“It's only three years in, but I think what we are seeing is that the local breeders are getting an idea of what we're trying to do,” said Barretts General Manager Kim Lloyd. “We are looking to have a sale where we can offer high-end Cal-breds and get them sold for good money. I think we are going to see a lot of that this year.”

With the Del Mar race meeting in full swing, space is at a premium. The inaugural August yearling sale in 2015 featured a catalogue of 76 and last year's catalogue included 77 yearlings. This year's 88 yearlings include seven supplemental entries.

“We put up stalls in the arena and we added more stalls again this year,” Lloyd said. “We have 80 stalls this year. So we are expanding a little at a time, but we don't have much more room.”

The 2016 auction's buying bench was made up mostly of local owners and trainers, with a scattering of pinhookers. Lloyd thinks that trend might change in 2017.

“[The buyers] have been mostly end-users, but this year we are seeing an uptick in pinhookers coming out,” he said. “There was some pinhooking that went on last year and they did well–there was a filly that came out of the October sale for $42,000 and she sold for $360,000 [hip 6 at the Barretts March sale]–and we had some come out of this sale and perform. We're having more pinhookers show up this year, so it will be a little different, I think.”

“We've seen breeders buy mares in foal and bring them out here and foal them and have Kentucky-sired Cal-breds,” Lloyd said. “We'll see a lot of those in this sale and we feel like they will sell really well.”

As Barretts continues to build its brand at Del Mar's oceanside oval, Lloyd thinks the attraction of the live racing meet helps bring added focus to the yearling sale.

“People love to come to Del Mar and there has been a lot more hype around this sale this year,” Lloyd said. “And that's part of the Del Mar vibe. That's what we are trying to grow here. And Del Mar has been great. The guys at Del Mar have been a tremendous help to put this thing on and without them, we couldn't do it. So we're very grateful to them.”