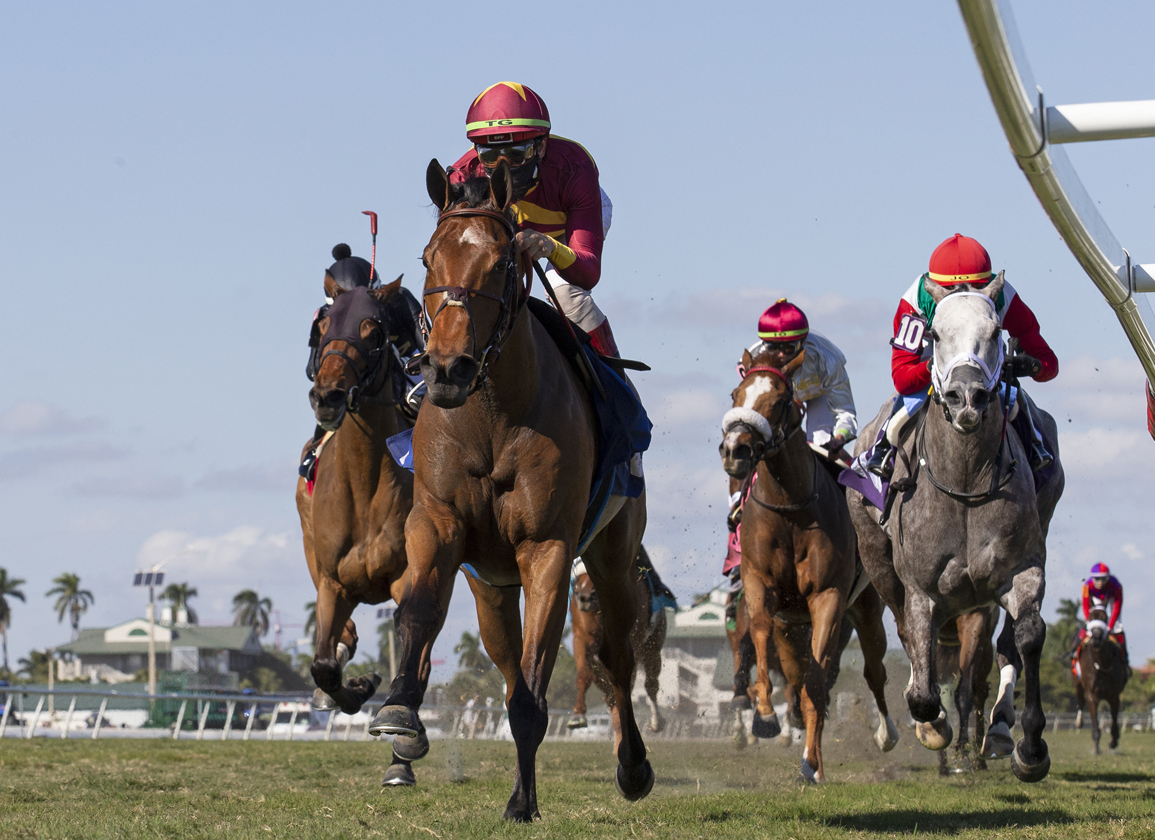 If it's bargains you want, look no further than the Tattersalls July Sale, but you will need to be able to think outside the box to secure them.

Nobody can accuse Edgar Byrne, Stephen Hillen and Milton Harris for rigid thinking, however, as the three men are responsible for unearthing arguably the best value buys at Newmarket in the past few years.

Just 3,000gns was all it took for Byrne to buy the Godolphin-bred Kitty Marion (GB) (Iffraaj {GB}), who went on to win a group 3 in Germany, while Hillen picked up Zofelle (Ire) (Zoffany {Ire}), who would go on to achieve a group 3 victory and become group 1 placed in America, for a mere 27,000gns.

Trainer Milton Harris recorded his best ever season over jumps last term by sending out 56 winners, highlighted by Knight Salute (GB) (Sir Percy {GB}), a horse he picked up for just 14,000gns at this sale 12 months ago, bagging the G1 Jewson Anniversary 4-y-o Juvenile Hurdle at Aintree in the spring.

Put simply, there are bargains to be found at the July Sale this week. However, according to Byrne, not only do you have to spend hours trawling through the catalogue but you also need a heavy helping of luck.

Recalling Kitty Marion at the sales, Byrne said, “She had a lovely pedigree. Her dam is a half-sister to Wootton Bassett (GB) so, even on that basis, I couldn't believe she went through as cheaply as she did.”

He added, “If she never set foot on a racecourse again, she was a winning filly with a nice pedigree and I couldn't believe we got her for 3,000gns. We were prepared to pay a fair bit more for her to be honest.

“That's the beauty of buying at the July Sale and buying off Godolphin. They have fantastic pedigrees and disperse regularly.”

Despite costing just a shade more than a month's training fees, Kitty Marion belied her basement buy status when landing the G3 Baden-Baden Goldene Peitsche in Germany last season, a win that was made extra special by the fact that the filly was trained by Byrne's close friend Guillermo Arizkorreta.

He explained, “She was bought for the champion trainer in Spain, Guillermo Arizkorreta, who is a great friend of mine. We rode together as amateurs a long time ago and I bought a very good miler, Amedeo Modigliani (Ire) (Galileo {Ire}), for him as well so we are always looking.

“We were extremely lucky to find Kitty Marion for 3,000gns and, at the end of the day, you need a bit of luck sometimes. She was just completely missed by everyone and that's what this industry is all about; getting a rub of the green on a given day.”

Hillen echoed the sentiments of Byrne. The well-known bloodstock agent, who was responsible for buying the sale-topping Saxon Warrior filly consigned by Katie Walsh's Greenhills Farm at this year's Tattersalls Ireland Goresbridge Breeze-Up Sale, explained how recruiting horses for America is not an exact science.

In the case of Zofelle, who won just once from seven starts for Hugo Palmer before climbing the ranks in America and achieving Group 1 black type, Hillen was clearly thinking on his feet.

“I find that if a horse does something once, it's always capable of doing it again,” he said, referring to Zofelle's debut win. “Her form had tailed off a little bit after that but, at the price, I thought she was worth taking a chance on,” he added.

Zofelle is now worth a multitude of the 27,000gns Hillen paid for her in 2019 with the bloodstock agent explaining that, in recruiting horses for America, it's the lowly-rated horses who can sometimes usurp the bigger buys, depending on how they take to the training.

He explained, “Zofelle just looked like she wanted fast ground. I am good friends with Brendan Walsh and it's great when they turn out that good. You don't expect it when they cost what she did.”

Hillen added, “When you've only won one race, you've loads of options in America, and she obviously got confidence as she progressed through the ranks.

“Sometimes the real naps don't work out in America. You could have one with listed-placed form and they might not take to the training.

“Then you could get one rated in the 70s or maybe lower and they take to it. It's hard to predict which ones will take to it and it's a numbers game really.”

Hillen and Byrne will be back for more at Newmarket this week and, so too will Harris, who will be bidding to try and find the next Knight Salute.

Harris knows that he won't be alone in trying to find the next winner of the Triumph Hurdle but expects to pick up a number of new recruits ahead of the jumps season.

He said, “I commented a few times last year when I was interviewed after Knight Salute was winning that horses like him provide optimism to people who can't go out and spend big money on horses.”

Harris added, “Mark Adams [agent] and I, we spend weeks on this catalogue. We put together a list of 70 or 80 horses and eliminate them as we go after finding out about them and making some phone calls. That list will be down to about 40 by the time the sale starts and we will try and buy five or six.

“I am really pleased for the racing public that they can see that for 14,000 you can buy a good racehorse. I plan to buy five or six this week with the cheapest being about 10,000gns and the most expensive about 70,000. You've got a chance at the July Sale.”