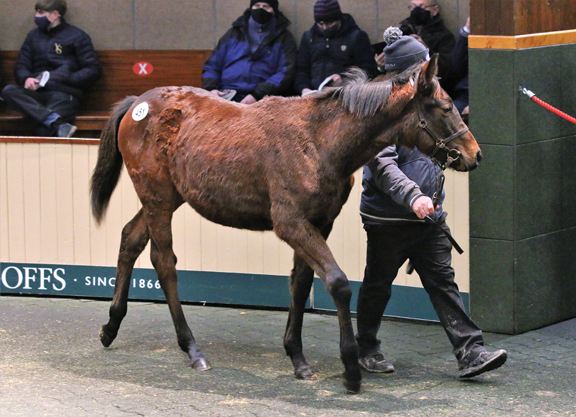 KILDARE, Ireland–Different day, different trade. As expected, business at Goffs on Saturday proved a good bit more lively as pin-hookers and end users alike did battle for some quality foals. Although last year's corresponding top price of €135,000 was exceeded by a €155,000 Sea The Stars (Ire) filly foal, other sale indicators suggest the market continues to struggle in the face of uncontrollable circumstances. The clearance rate of 79%, while considerably improved from Friday was still a little shy of last year's 86%. Similarly, the aggregate of €4,855,900, average of €27,907 and median of €20,000 all failed to keep tabs on 2019's figures, though these numbers are still perfectly respectable in the current grand scheme of things.

Lot 451, the only foal by Sea The Stars catalogued on the day, was bound to attract a lot of interest and, when the filly in question hails from the immediate family of the Gilltown stallion's brilliant but ill-fated daughter Sea Of Class (Ire), then it was no surprise that agent Federico Barberini was pushed to €155,000 to secure the Oak Lodge & Springfield House Stud consigned foal. The Razza Del Velino bred filly is out of Mooney Ridge (Ire) (Indian Ridge {Ire}), a half-sister to G1 Irish Oaks winner Sea Of Class who is already the dam of two stakes performers in Italy.

Barberini, acting for an undisclosed client, said, “She has been bought to race and her page speaks for itself. She has lots of residual value and her 2-year-old half-brother by Australia (GB) is highly regarded.”

A return to a sale ring next year is also not the plan for Lot 354 rather a racing career in Sheikh Hamdan's silks is in store as the son of Whitsbury Manor Stud stallion Havana Grey (GB) was knocked down to Shadwell's Stephen Collins for €135,000. The grey colt is a half-brother to Martyn Meade's quality sprinter Method (Ire) (Mehmas {Ire}) and his yearling half-brother by Belardo (Ire) sold at the Orby Sale in Doncaster for £60,000.

After getting the better of a series of determined bids from Ger Morrin Collins said, “He was our pick of today. He is a very nice colt, forward, mature and athletic with a great attitude. He will go to Derrinstown to be raised and we'll start to think about where to send him this time next year.”

The sale was a fine return for breeder Michael Phelan of Pipe View Stud in Kilkenny with the foal bred from the inexpensive mare Darsan (Ire) (Iffraaj {GB}) off an advertised 2019 covering fee of £8,000.

The Mehmas (Ire) factor kicked in with Lot 512 when the Morrin family's Pier House Stud dug in to acquire the first foal out of unraced Single Thought (GB) (Teofilo {Ire}) for €130,000.

It was a huge result for breeder Mick Buckley who consigned the colt foal through his Curragh based Harefield Cottage Stud and who picked up the dam for very small money at Tattersalls in 2018.

“I'm delighted, absolutely over the moon,” said Buckley. “He is a lovely horse and a lot of it is a case of the right sire at the right time. I think I got lucky at Tattersalls when I bought the mare as England were playing in the semi-final of the World Cup when she went through the ring and a lot of people were pre-occupied and I managed to get her for 2,000gns. My luck didn't end there as when I brought her to Tally-Ho to get covered by Kessaar (Ire), my original choice, he was busy so I had to make do with Mehmas! Lots of luck involved but there can be plenty of bad luck in this game, so I'll gladly take today's result. All the right people liked him, he vetted well and I'm delighted he is going to a good home and I hope he is lucky for the Morrins. He'll be a right bull of a yearling next year and I look forward to seeing him wherever he turns up,” Buckley added.

Coolmore stallion Saxon Warrior (Jpn)'s first foal to be offered at Goffs was certainly well received and Lot 329 was eventually knocked down to MAB Agency and Larry Stratton for €88,000. The Castlebridge consigned bay filly is the first produce out of Cascella (Ire) (Iffraaj {GB}), who in turn is out of the multiple stakes winner Lily's Angel (Ire) (Dark Angel {Ire}). Another Coolmore sire to have a good day was Australia (GB) and Luke Barry of Manister House Stud will be monitoring the American racing results with interest over the coming months after parting with €80,000 to purchase a son of the Classic stallion from Irish Emerald Stud. Lot 301 is a full-brother to Counterparty Risk (Ire), who broke her maiden last month at Aqueduct for the powerful combination of Chad Brown and Klaravich Stables.

Bigger targets will no doubt await that 3-year-old filly having cost 325,000 gns as a yearling at Tattersalls and this colt's page, which already features GI Canadian International winner Sarah Lynx (Ire) (Montjeu {Ire}) could look even better in 10 months' time. For breeder and vendor Irish Emerald Stud it was a fantastic result having purchased the 11-year-old mare Anklet (Ire) (Acclamation {GB}) at Tattersalls 12 months ago carrying this foal for just 18,000gns. While obviously delighted with the price, Gary Duffy, owner of Kildare based Irish Emerald Stud said he wouldn't have been surprised if the colt had made even more.

“He is a cracking foal and it's a great pedigree, so I was expecting him to be popular,” said Duffy. “Luckily for me Australia had hit a bit of a flat spot this time last year and the mare was at a bit of a crossroads, so I was able to get her for what is now great value. Australia then had plenty of good success on the track this year and the filly winning in America was also a great help and I believe there are plans to run her in a Grade I. The mare is in foal to Ribchester (Ire) but after today, and with Counterparty Risk, I'd say she'll have to go back to Australia (GB).”

Baroda Stud also found favour with an Australia colt when selling Lot 504, a half-brother to the stakes-placed American Lady (Ire) (Starspangledbanner {Aus}) for €72,000 before making an impact as a purchaser when buying lot 530 for €90,000. This colt by Teofilo (Ire) was consigned by Clare Manning's Boherguy Stud on behalf of her grandfather Jim Bolger and is a full-brother to the smart stakes placed 3-year-old Agitare (Ire).

Friday's top price was equaled early Saturday morning when the fourth foal into the ring, Lot 291 was bought by BBA Ireland's Eamonn Reilly for €75,000. By the ever popular Dandy Man (Ire) the Milestream Stud offered colt is the second produce out of the Raven's Pass mare Zehrah (Ire), who is a half-sister to stakes winner Sameem (Ire) (New Approach {Ire}).

Another Dandy Man (Ire) colt, Lot 380 fetched the same price of €75,000 when selling to Yeomanstown Stud. Offered by Airdreigh Stud the colt is out of Fancy Feathers (Ire) whose five winners to date include the stakes winner Elnadim Star (Ire) (Elnadim). Not long after Joe Foley rowed in to support his own stallion when going to €67,000 to buy J.P Condren's son of Dandy Man, Lot 428 before yet another Dandy Man colt, Lot 464, out of a winning half-sister to G2 Queen Mary S. winner Elletelle (Ire) (Elnadim) was knocked down to Euro Ventures for €72,000. Rounding off a quintet of high end foals by the super dependable sire lot 491 from Ballinacurra Stud also reached the €72,000 mark when selling, like a previous one by the stallion, to Yeomanstown Stud. That quintet grew to a sextet late in the day when one of the bravest pin-hookers in the business Philip Stauffenberg gave €72,000 for Oak Leaf Stud's Dandy Man filly (Lot 525) from the family of Quarter Moon (Ire) (Sadler's Wells).

Some much needed festive cheer will be added to Sunday's session when well known sales groom Brenda Shortt will don a Mrs. Claus outfit while leading up the final foal in the sale Lot 759, a Dark Angel (Ire) colt offered by the McEnery's Vinesgrove Stud. Shortt is raising money for mental health in a year that has been understandably tough for so many. To contributions to the worthy cause, click here.