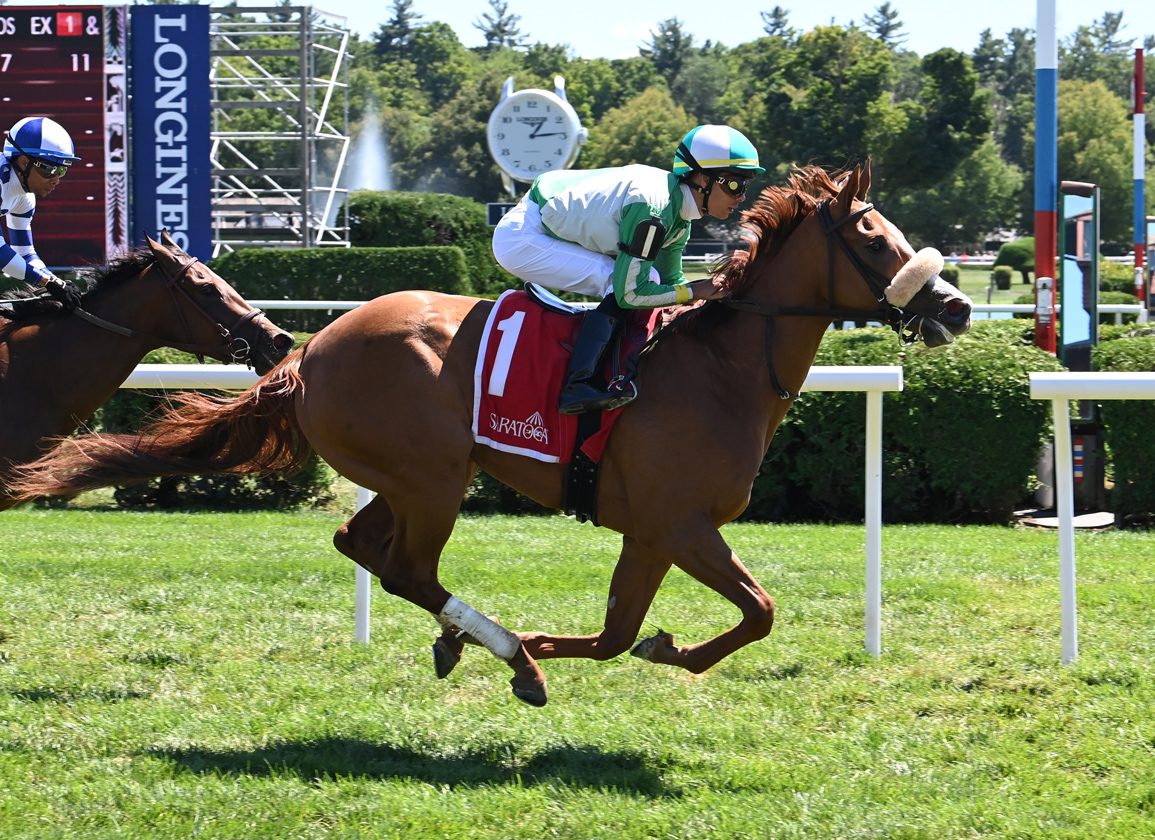 1st-Saratoga, $88,000, (S), Msw, 8-12, 2yo, f, 5 1/2fT, 1:03.18, fm, 1 length.
IM JUST KIDDIN (f, 2, Justify–Khancord Kid {GSW, $167,343}, by Lemon Drop Kid) scored here at second asking for the same connections of GI Breeders' Cup Filly and Mare Sprint shock winner Bar of Gold (Medaglia d'Oro), GISW, $1,551,000, becoming the eighth winner for her freshman sire (by Scat Daddy). Breaking well from the rail as the 4-5 favorite, the Kimmel trainee was outrun early but content to track from fourth behind :22.36 and :45.34 splits. Swung to the outside for her rally, she took aim at frontrunner Highway Harmony (Mo Town) and greenly ran down that pacesetter despite swapping leads in deep stretch. Im Just Kiddin won with ears pricked after finishing second last out on debut July 15 sprinting this distance on the main track. Kingsley Creek (Lord Nelson) flipped behind the gate before the start, and was scratched. Conditioner John Kimmel reported later that she appeared to come out of the incident okay. Im Just Kiddin's aforementioned older half-sister is a graded stakes producer herself as the dam of GIII With Anticipation S. victor Coinage (Tapit), who the Bromans race in partnership with D. J. Stable after he passed through the ring for $450,000 at KEESEP. The victress also claims Land Mine (Mineshaft), SP, $158,342; and stakes-placed Homeland (American Pharoah) as half relations. Dam Khancord Kid (Lemon Drop Kid) claimed the GIII Herecomesthebride in Hallandale as a race-mare, and is half to MSP Crackerjack Jones (Smarty Jones). She produced a 2022 Uncle Mo filly and visited Medaglia d'Oro for 2023. Lifetime Record: 2-1-1-0, $66,000.  Click for the eEquibase.com chart or VIDEO, sponsored by TVG.
O/B-Chester Broman & Mary R. Broman (NY); T-John C. Kimmel.