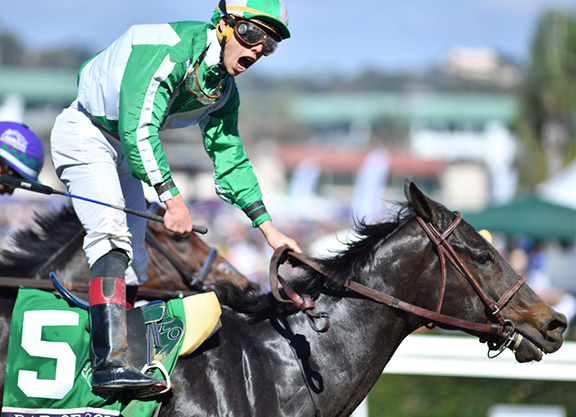 Bar of Gold (Medaglia d'Oro) entered the GI Breeders' Cup Filly & Mare Sprint as a complete outsider without a previous career victory on a fast dirt track. The Chester and Mary Broman homebred, a last out sixth as the 9-5 favorite in the Keeneland slop in the 1 1/8-miles GI Juddmonte Spinster S. Oct. 8, had other ideas, apparently, and took advantage of a perfectly timed ride to get up in the last stride and score a colossal 66-1 upset.

“We knew it was in there somewhere,” winning trainer John Kimmel said. “She pulled it out at the right moment. She's brushed on greatness a few times, and she's gotten better as the years have gone on.”

Kimmel continued, “She is getting to the end of her career and here we are. I've always liked horses cutting back in distance, especially in a sprint, and a seven-eighths sprint. I've won the Test a couple of times with that tactic. She showed up today, and Irad [Ortiz Jr.] gave her a great, great trip.”

All six of Bar of Gold's previous career victories came over sloppy tracks (5) or grass (1). The 2015 GI Test S. runner-up was one for eight this term, capturing Saratoga's grassy Yaddo S. Aug. 25 and finishing second to Ami's Mesa in the GII Presque Isle Downs Masters S. over the synthetic Sept. 18. The 2017 GII Ruffian S. runner-up was beaten 11 1/2 lengths in her aforementioned attempt in Lexington most recently.

“I got a perfect trip,” Ortiz Jr. said. “She broke good, put me in good position and I just saved her. She made a good run on the inside and when I took her to the outside, she responded pretty good.”

Bar of Gold is the first foal out of Broman homebred Khancord Kid, heroine of the grassy 2010 GIII Herecomesthebride S. She had a Giant's Causeway colt in 2016, an American Pharoah colt this year and was bred back to Medaglia d'Oro. Bar of Gold's unraced second dam Confidently, a full-sister to Yankee Gentleman, brought $1 million from the Bromans while in foal to Mr. Prospector at the 2000 KEEJAN sale. Medaglia d'Oro is also the sire of fellow Breeders' Cup winners Songbird and New Money Honey. Bar of Gold joins New York-breds Dayatthespa (FMT, 2014) and London Bridge (MAR, 2013) to capture Breeders' Cup races.