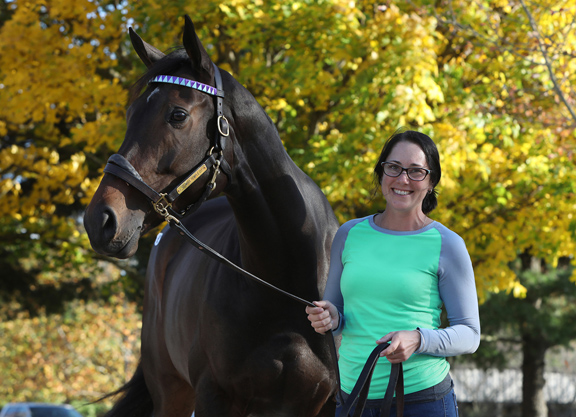 The Keeneland January Horses of All Ages Sale will mark the inaugural consignment of Amy Bunt and John Barton's Baldwin Bloodstock, which will offer 21 horses during the four-day auction next week. Bunt, who was a partner in the now-disbanded Select Sales Agency and a principal in Machmer Hall Sales which debuted at the yearling sales last fall, brings a wealth of international experience to the new endeavor.

“When we sat down earlier in the spring and talked about Machmer Hall Sales and the direction they wanted to go in, Carrie [Brogden] just wanted to concentrate on the yearlings, so she could buy more mares and be more proactive with helping her clients purchase horses, rather than selling horses at the mixed sales,” Bunt said of her decision to launch the new consignment. “And it just kind of popped into my head. 'What about me? In January the sales are kind of small, would you mind if I did my own consignment?' And graciously, she and her mother [Sandy Fubini] said yes and they are supporting me, as well as some of our clients. It was just a happy accident.”

Bunt traces her love of horses to a trip to the park when she was just a toddler.

“I am literally the only horse person in my family,” Bunt said with a laugh. “My dad took me to a park when I was a little kid, I think I was about three years old, and these people had pulled up to go trail riding with their horses. I probably had never even seen a horse before and I just had a temper tantrum until he let me go over and they kindly let me sit on one of their horses. So somehow I was just born with a desire to be around them.”

Bunt grew up riding horses and graduated from Virginia Tech with a degree in Animal Sciences before finding her way to the Bluegrass as part of the Kentucky Equine Management Internship.

“I really just wanted to learn how to breed horses,” Bunt said. “I thought I might breed riding horses. But when you get to Central Kentucky and it's so beautiful, you just kind of get the bug.”

Bunt spent a year working for Coolmore in Australia and returned to Kentucky where she initially worked as a veterinary technician at Hagyard Davison McGee. She also served as sales coordinator for Van Meter Sales, Niall Brennan Stables and Eaton Sales and served international stints in Ireland and in England with Ted Voute before joining Select Sales in 2013. She became a partner in that operation in 2016.

“When Select disbanded last year, Carrie maintained a small number of clients,” Bunt said. “She has worked really hard and was trying to take a step back and enjoy life a little bit more and enjoy their success. She downsized and focused on quality over quantity. So a lot of the clients that stayed with Machmer Hall Sales are selling with us [at Baldwin Bloodstock] and then I have acquired a couple new clients.”

She also acquired a partner for the new venture in John Barton, who is a cousin of bloodstock agent Bob Feld.

“John knows Mr. [B. Wayne] Hughes from Spendthrift really well–I think it goes back to his uncle and Mr. Hughes who were best friends growing up in Temple City, California. And he is close with our family as well. I met him through the Felds. He came to the sales spending some time with Spendthrift and he was part of the MyRacehorse team that had Authentic. He was interested in shadowing me around the sales, so he came and hung out with me at the sales for a little bit. And as it turned out, he was looking to make a career change.

Bunt continued, “He got the bug coming here and it just kind of happened. I said, 'I am starting my own small consignment, I'm looking for someone to help me out with it because I pretty much have a full-time job with Machmer Hall. It would be nice to have someone there to take over some of the duties, so I'm not doing it all myself.' He kind of jumped at the chance and it's been a really happy partnership so far. He is super enthusiastic and super positive. I don't ever see him being in a bad mood and that's the kind of personality that you want to bring in.”

The name Baldwin Bloodstock is a nod, both to the entrepreneurial spirit of Santa Anita founder E J “Lucky” Baldwin, and a personal tribute to a spunky horse near and dear to Bunt's heart.

“I have an old retired Thoroughbred named after [Baldwin],” Bunt explained. “The horse has been–he's just a brat, to be honest with you. He is the coolest horse and I think his attitude is what made him a successful racehorse and he was a successful show horse for me. He raced over 70 times and earned almost $300,000 the hard way. When I got him, I didn't even know if he was going to be sound enough to do anything. He's just one of those really awesome hard-knocking horses. I showed him up through the preliminary level eventing, which is a more extensive level than I thought I would personally ever do and definitely more than I thought he was going to be able to do.”

The now 23-year-old Lucky Baldwin (Crafty Prospector) won 10 times in 74 starts and earned $255,468 before embarking on his show career with Bunt.

“He's still terrorizing the farrier and everyone and he still goes foxhunting and I ride him a couple times a week just to keep his joints limber,” Bunt said. “I thought it would be nice to honor him [with the consignment's name] because he's kind of what we are all here for and what we are all working for. Just to have happy endings for horses like that that provide a living for us.”

She added, “And then the story of Lucky Baldwin himself, he was a famous prospector in California and obviously started Santa Anita and had a lot of entrepreneurial success. I just thought it would bring some luck to us.”

Bunt is excited about Baldwin Bloodstock's first consignment at the Keeneland January sale.

“Physically, I think we have a really, really super group,” she said. “And we have some great sire power.”

The Baldwin Bloodstock consignment features a pair of yearling fillies by Union Rags (hip 324 and hip 376), as well as a yearling filly by Brody's Cause (hip 984)–both stallions who have been in the news lately.

“Union Rags has been on fire lately,” Bunt said. “He's had [Jan. 1 Cash Run S. winner] Gulf Coast, [GII Los Alamitos Futurity winner] Spielberg and [Fair Grounds maiden winner] Defeater, who won so impressively they already think he's a Derby-type horse. And Brody's Cause has Kalypso, who just won the GII Santa Ynez and was second in a Grade I.”

Bunt will bring a vast array of knowledge to the new consignment, but her philosophy is simple and straightforward.

“I really want to focus on the winter sales,” Bunt said. “I think January and February are great times to sell horses who have good conformation. A lot of times in November they can get overlooked.”

Looking ahead to the fall, Bunt said, “In November, I still help Machmer Hall, short-listing for them, and I really enjoy that. So I don't know if we'll have a November consignment going forward. But Carrie and I have spoken and she was all for me doing the Fasig-Tipton November consignment. She didn't particularly want to sell at that one anymore and if I wanted to do it, she said she would filter horses my way. So right now, I have a consignment at Keeneland January, OBS January and Fasig-Tipton February. And we'll look at doing the November sale this fall at Fasig-Tipton.”

With the ongoing global pandemic and political uncertainty, this might be a daunting time to start a new endeavor, but Bunt sees reasons to be optimistic.

“You always worry about the economy and politics can seem to play a part,” she said. “But today I read handle was only down 1% in 2020, so I think that's super optimistic for our sport. We need all the good news we can get. I thought that was great to know that people are still gambling and still interested even when they couldn't attend live racing. And the numbers in the economy and the stock market have remained pretty steady compared to what could have happened. So, I am cautiously optimistic. It's not an ideal time to start this, but if you can get through this, then you should be able to make it through anything.”