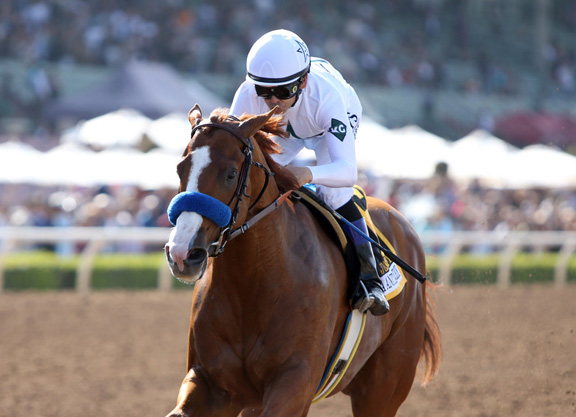 After 2 1/2 years of closed-session decision-making by the California Horse Racing Board (CHRB) and a complicated court battle to publicly reopen the case over whether to disqualify 2018 Triple Crown winner Justify over a scopolamine positive from when the colt won that year's GI Santa Anita Derby, the initial back-and-forth legal salvos in an Oct. 29 stewards' hearing on the matter indicate that the argument could come down to whether scopolamine was a Class 3 or Class 4 substance at the time of the post-race test.

The difference in classification might seem pretty simple to determine. And the distinction is of the utmost importance in California, where Class 1 through 3 drug positives trigger automatic disqualification of horses, regardless of trainer intent or culpability.

But as four-plus hours of back-and-forth testimony and cross-examination repeatedly underscored Thursday, a definitive answer on the drug's technical classification remains elusive and open to interpretation because of the cumbersome, bureaucratic way the CHRB has to codify its rules to comply with state law (explained below).

Beyond the objection-laden testimony over scopolamine's classification at the time of Justify's positive, an attorney for Bob Baffert, the colt's trainer, argued that the stewards shouldn't even be re-hearing the case at all because the CHRB already adjudicated it without imposing any penalization or race disqualification in an August 2018 executive session.

That controversial 2018 commission vote took place privately after a detailed–but not publicly disclosed at the time–investigation that led to the exoneration of Justify and Baffert based on a finding of accidental environmental contamination by jimson weed.

“This case was correctly decided by the CHRB in 2018. It was a final and binding decision. And nothing has changed since then, and you all should simply affirm that decision so that we can put this matter to bed once and for all,” said Baffert's lawyer, W. Craig Robertson III.

“When that investigation was complete, there were two things that were clear, undisputed and undeniable,” Robertson continued. “Number one, that this was a case of innocent environmental contamination from hay and it was not a case of any intentional administration of any drug or medication. And number two, that the trace levels of scopolamine … had no effect on the performance of these horses and no effect on the races.”

But Robert Petersen, an attorney representing the CHRB, said he disagreed “with the idea that this is somehow a re-do of some earlier adjudication. I think the facts clearly show there has never been a full adjudication on the merits of this issue … People may have an issue with the rule [mandating Class 3 disqualifications being too] draconian. But that's what the rule is. I can't change the rules.”

Although Justify is the “headline horse” in the case, the stewards were combining two cases into one hearing Thursday. Also up for potential re-adjudication was the scopolamine positive of MGISW Hoppertunity, another Baffert trainee who tested dirty when winning the GIII Tokyo City Cup S. the day after Justify won the Santa Anita Derby.

For context, the two positives of the Baffert trainees were not isolated cases. In roughly the same time frame in 2018, the CHRB received positive post-race tests for scopolamine on five other horses, and the CHRB eventually treated them all as unintentional jimson weed contaminations from ingesting tainted hay.

Arthur, who led the 2018 scopolamine investigation and had recommended not penalizing Justify, Baffert, or any of the other horses or trainers based on the findings and mitigating circumstances, testified under the unusual circumstances of disagreeing with the CHRB's decision to have the Santa Anita stewards revisit the case. (It should be noted that the CHRB is no longer comprised of the same makeup of commissioners who were on the board in 2018).

“The entire case [of all scopolamine positives during that time frame] was dismissed. And I'm actually pretty shocked the state's arguing otherwise,” Arthur said.

“I stand by my recommendation to the executive director and the board 100%,” Arthur continued. “This was the correct decision. It was the fair decision. Usually, regulatory agencies don't have the guts to do what's fair and right, and this board made that decision appropriately. I think they could be questioned about the lack of transparency. And I warned them that this was not going to stay a secret at that time. But that was their decision, not mine.”

Background on the case

Arthur's point about the lack of transparency factors centrally in the way the Justify and Hoppertunity positives were handled in 2018. No complaints were issued at the time of findings, and the CHRB's investigation unfolded behind the scenes while the nation was watching Justify win race after race en route to an undefeated, Triple Crown-winning season.

When the CHRB finally did vote not to penalize Justify or Baffert, it was August 2018, and their unanimous executive-session decision was not made public.

It was more than a year before news about Justify's positive and non-penalization became widely known. On Sept. 11, 2019, the New York Times broke the story that Justify tested positive when he won the Santa Anita Derby, a GI Kentucky Derby points qualifying race that vaulted him into contention for the Triple Crown.

That revelation sparked a January 2020 lawsuit initiated against the CHRB by Mick Ruis, who owned and trained the 2018 Santa Anita Derby runner-up, Bolt d'Oro. In his suit, Ruis alleged that the CHRB's secret vote to dismiss the case led Ruis to suffer “the loss of purse caused by the CHRB's failing to disqualify Justify and re-distribute the purse for the positive test result.”

Eight months later, as part of a negotiated settlement to get Ruis to drop his lawsuit, the CHRB again met in closed session, voting Aug. 20, 2020 to reverse its previous course of no action and to proceed with a complaint seeking the disqualification of Justify and the redistribution of the purse from that stakes.

So is scopolamine Class 3 or 4?

The new complaint that the stewards were tasked with adjudicating Thursday pertains to possible race disqualifications for Justify and Hoppertunity, and not punishment of Baffert.

The bone of contention that came up early and often was how California classified scopolamine at the time of the offenses.

The CHRB, by its own regulation, follows the Association of Racing Commissioners International (ARCI) Uniform Classification Guidelines for Foreign Substances and Recommended Penalties when establishing model rules for drugs. The ARCI once classified scopolamine as a Class 3 drug (lower-number classifications are more severe). But in December 2016, the ARCI reclassified it to a lesser Class 4 offense.

Arthur testified that the CHRB fully intended to follow the ARCI's model rule that reclassified scopolamine (and other drugs that also changed classes). But since California's Office of Administrative Law doesn't allow the CHRB to change rules by automatically referencing another authority's code, the racing agency has to go through a drawn-out process to make even minute changes such as drug reclassifications.

So because of this bureaucratic backlog, scopolamine in 2018 was still technically Class 3 in California, even though Arthur and the CHRB considered it to match the ARCI's newer Class 4 downgrade.

Arthur explained how as the equine medical director, he has regulatory leeway to take into consideration mitigating circumstances, and that's what he did when recommending no initial penalties for the scopolamine positives.

“It is inherently unfair to hold somebody to a classification that is outdated because of regulatory inefficiency,” Arthur said.

But Petersen, the CHRB attorney, said regardless of Arthur's intent and interpretation, that's not how the scopolamine rule was on the books at the time Justify and Hoppertunity tested positive.

“It is true that scopolamine was later reclassified as Class 4. But that did not happen until January 2019,” Petersen said.

In concluding remarks, Robertson urged the stewards to consider the wider, precedent-setting implications of not allowing the scopolamine adjudications from 2018 to remain intact.

“You, as stewards, always have discretion to do what's right and just,” Robertson said. “And not only do you have that discretion, you should exercise that discretion. Not just for the parties in this case, but for the horse industry as a whole.”

CHRB steward John Herbuveaux, who moderated the proceedings, cautioned all parties at the conclusion of the hearing that a decision is “not going to be something that's going to happen in the very near future.”