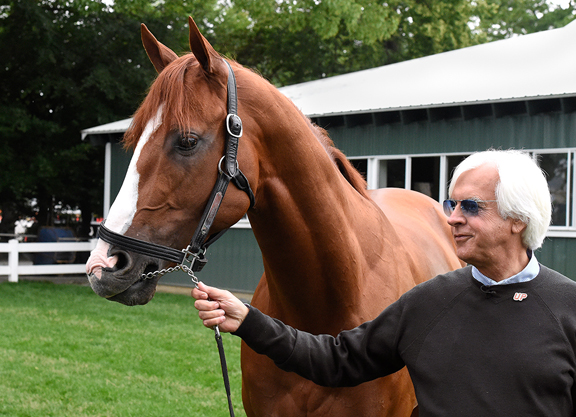 In his first public comments since a New York Times story broke that 2018 Triple Crown winner Justify (Scat Daddy) tested positive for the prohibited substance Scopolamine following the colt's win in the GI Santa Anita Derby, trainer Bob Baffert issued a statement Thursday morning which denied that the drug was intentionally given to the horse.

“I unequivocally reject any implication that Scopolamine was ever intentionally administered to Justify, or any of my horses,” Baffert wrote in the statement. “Test results indicating trace amounts of the drug were undoubtedly the result of environmental contamination caused by the presence of jimsonweed in feed, a naturally growing substance in areas where hay and straw are produced in California. In addition, I had no input into, or influence on, the decisions made by the California Horse Racing Board.

“Justify is the one of the finest horses I've had the privilege of training and by any standard is one of the greatest of all time. I am proud to stand by his record, and my own.”

Had the California Horse Racing Board disqualified Justify from his win in the Santa Anita Derby he would not have had enough points to make the field for the GI Kentucky Derby.
Baffert's attorney, W. Craig Roberston III, also released a letter he sent to the author of the story, Joe Drape. He called the article “long on sensationalism, short on facts and a great disservice to Mr. Baffert, Justify, and the entire horse industry.”

No one has disputed that Justify tested positive for Scopolamine in a race that was run 28 days before the Kentucky Derby. The lingering question is whether or not the California Horse Board erred in not adjudicating the matter in a more timely manner.

Proper procedures must be taken between the time a horse fails a drug tests and the findings are made public. In an earlier interview with the Thoroughbred Daily News, the CHRB's equine medical director Rick Arthur said that it can take as many as 60 to 90 days to resolve a drug positive case.

In a statement released Thursday by Churchill Downs Racetrack President Kevin Flanery, Flanery said Churchill had not been informed of the Scopolamine positive.

“Until media reports surfaced Wednesday night, neither Churchill Downs nor the Kentucky Horse Racing Commission had knowledge of any potential positive tests that may have emanated from California in advance of the 2018 Kentucky Derby,” he said. “We do know that all pre- and post-race tests for 2018 Kentucky Derby participants came back clean, including Justify. In advance of our race each year, the Kentucky Horse Racing Commission conducts pre-race out-of-competition testing for every Kentucky Derby starter and all starters' results were clean. After the race, the top finishers are tested for a myriad of banned substances and the results for all were clean.”

Scopolamine, though illegal, is generally not considered a performance-enhancing drug. Rather it is found in jimsonweed, which grows wildly, and has been known to inadvertently get mixed into a horse's feed.

In a statement, the Racing Medication & Testing Consortium explained, “Scopolamine (also known as hyoscine) is conventionally used in human medicine for the prevention of motion sickness. It is available by prescription in tablet and transdermal patch formulations. It has also had limited use in conjunction with general anesthesia in reducing airway secretions. It is associated with side effects of dizziness, drowsiness, blurred vision, nausea and dry mouth. Scopolamine has limited historical use in equine veterinary medicine to relieve intestinal spasms in the treatment of gas colic. However, gastrointestinal side effects, potential toxicity and the development of safer, more effective medications have rendered its use as a therapeutic medication obsolete.”

“…there was never any intentional administration of Scopolamine to Justify and any insinuation in your article otherwise is not only defamatory, but is also defies logic and common sense,” Robertson wrote to Drape. “No trainer would ever intentionally administer Scopolamine to a horse. It has a depressant effect and would do anything but enhance the performance of a horse. There is zero scientific evidence to suggest that Scopolamine has any performance-enhancing properties.

“It's a year and a half later, so I don't remember the exact date, but we were notified about it in mid-April,” Walden said. “I understood it was a contaminant, a known contaminant in California. We turned it over to an attorney, Craig Robertson, he communicated with them that he was handling it for us, and we never heard about it again.

“Bob Baffert's reputation speaks for itself,” Walden continued. “He's a great ambassador for the sport, and it's a shame it has come to this.”

Through Justify's Triple Crown campaign, the CHRB never disclosed the Scopolamine positive. It did not take any action until August when it voted to dismiss the case against Justify and ease rules on Scopolamine. Currently, any trainer who has a horse test positive for the drug may be subject to a fine or suspension, but the horse will not be disqualified.

“It is most unfortunate that the correct decision by the CHRB to not pursue action due to what was clearly a case of environmental contamination has been badly mischaracterized,” former CHRB head Chuck Winner said in a statement. “All possible tests and procedures and investigations were followed by the CHRB Equine Medical Director and senior staff, which led to the overwhelming evidence that Justify, along with six other horses in four different barns at Santa Anita, ingested scopolamine from Jimson Weed which was present in the hay that had been delivered to the barns … The California Equine Medical Director, the CHRB staff and the investigators followed all correct procedures in this case. When the Board was presented with all of the facts, it correctly voted to affirm the staff recommendation. It would have been a complete miscarriage of justice for the CHRB to have taken action against Justify or Baffert, knowing full well that the horse was poisoned by an environmental contaminate and not injected with a substance.”