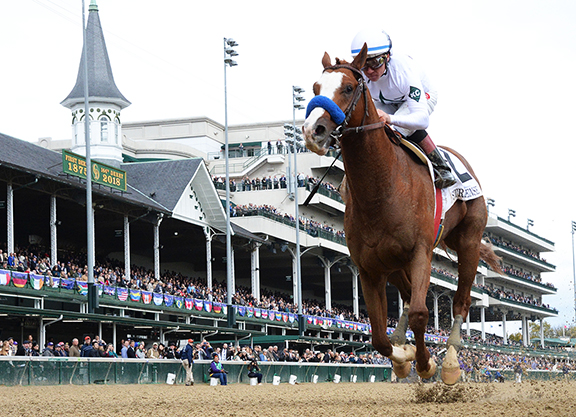 Bob Baffert certainly didn't have much trouble winning the GI Hollywood/Cash Call Futurity at Hollywood Park, taking the trophy home six times. Since that event has moved to Los Alamitos, however, Baffert has been perfect, capturing the new Los Alamitos Futurity four times in four runnings. Saturday, he appears likely to push that record to five-for-five with an imposing duo in the six-horse affair.

The most probable winner is, ironically, Improbable (City Zip). Getting up to score by a neck when debuting at 2-5 Sept. 29 at Santa Anita, the $200,000 Keeneland September graduate earned a 'TDN Rising Star' nod when romping by 7 1/4 impressive lengths in the Street Sense S. Nov. 2 at Churchill. The chestnut hasn't missed a beat since then, showing four workouts, including a best-of-67 five furlongs in :59 4/5 Dec. 3 in Arcadia.

Should Improbable not be up to the challenge, Baffert also starts another stakes-winning 'Rising Star' in Michael Lund Petersen's Mucho Gusto (Mucho Macho Man). Hammering for a whopping $625,000–62 1/2 times his sire's stud fee–at Fasig-Tipton Midlantic after a :21 1/5 quarter-mile breeze, the chestnut debuted with a four-length success at even-money over this track Sept. 20, and stayed unblemished with a front-running score in the GIII Bob Hope S. Nov. 17 at Del Mar.