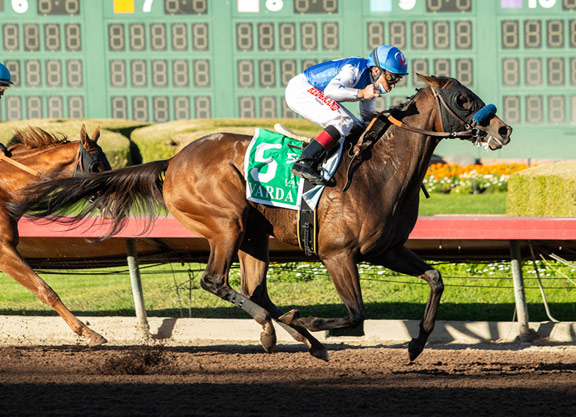 The GII Santa Ynez S. at Santa Anita Sunday looks like Bob Baffert's race to lose as he saddles four of the seven runners in the field, including Grade I winner Varda (Distorted Humor). A debut winner at Del Mar Aug. 30, the $700,000 OBSAPR buy was second to recently retired stablemate Princess Noor (Not This Time) when navigating two turns in the Sept. 26 GII Chandelier S. in Arcadia. The bay rallied to victory at odds of 17-1 in the Dec. 5 GI Starlet S. at Los Alamitos, defeating re-opposing barnmate Kalypso (Brody's Cause) and Nasreddine (Nyquist). Kalypso captured the Oct. 18 Anoakia S. at Santa Anita prior to the Starlet and sheds the blinkers for this sophomore bow.

Baffert also saddles Gary and Mary West homebred Exotic West (Hard Spun), a debut winner at Del Mar Nov. 21; and Frosteria (Frosted), who has finished second in all three of her starts, most recently going a mile at Los Alamitos Dec. 13.

Rounding out the field are Anoakia and Desi Arnaz S. runner-up Queengol (Flashback); and Brilliant Cut (Speightstown), who was claimed by trainer Doug O'Neill for $50,000 out of a winning effort at Del Mar Nov. 20.