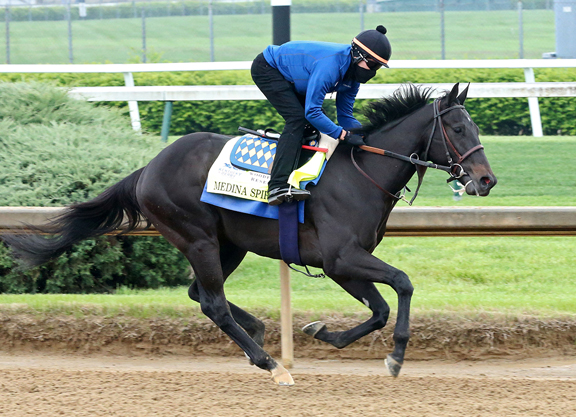 Bob Baffert said in a statement issued Tuesday that Medina Spirit (Protonico) was treated with an anti-fungal ointment prior to his victory in the GI Kentucky Derby, which he believes may explain why the horse tested positive for the medication betamethasone in a post-race test. Baffert said that Medina Spirit had been dealing with a case of dermatitis after finishing second in the GI Runhappy Santa Anita Derby and was treated with the medication as late as Apr. 30, the day before the Kentucky Derby.

With the latest statement, Baffert reversed course after declaring emphatically earlier in the week that the horse had never been treated with betamethasone. The trainer now says that he was not aware until Monday that the ointment in question, called Otomax, contained betamethasone. Betamethasone is clearly listed as an ingredient in Otomax on the box containing the drug.

Otomax, made by the pharmaceutical giant Merck, is commonly used to fight infections in the outer ears of dogs. The word “Betamethasone” appears prominently on the front of the packaging. According to the company, “Otomax is indicated for the treatment of canine acute and chronic otitis externa associated with yeast (Malassezia pachydermatis) and/or bacteria susceptible to gentamicin. Otomax contains gentamicin sulfate, betamethasone valerate and clotrimazole in a mineral oil-based system containing a plasticized hydrocarbon gel.”

“Yesterday, I was informed that one of the substances in Otomax is betamethasone,” Baffert said in his statement. “While we do not know definitively that this was the source of the alleged 21 picograms found in Medina Spirit's post-race blood sample, and our investigation is continuing, I have been told by equine pharmacology experts that this could explain the test results. As such, I wanted to be forthright about this fact as soon as I learned of this information.”

When asked how a veterinarian could have given the horse Otomax so close to a race without knowing it could result in a drug positive, Baffert's attorney Craig Robertson replied, “That's a question you're going to have to ask the veterinarian. I don't want to be quoted as throwing the veterinarian under the bus either. Listen: I don't know the answer to that question. I just don't.”

While the revelation about Otomax may help explain why Medina Spirit failed a drug test, it does not necessarily mean that Medina Spirit's Derby win will be upheld. Betamethasone is a Class C drug that, in Kentucky, cannot be given to a horse within 14 days of it racing. No levels of the medication are allowed to be in a horse's system come race day and the penalties for such an infraction may include the disqualification of the horse, along with fines for the trainer starting at $1,000 and a possible suspension of 15 days.

However, racing commissions have become more lenient in recent years when it involves the sport's traditional “absolute insurer” rules regarding drug positives. Earlier this year, the Arkansas Racing Commission, citing extenuating circumstances, reinstated the Baffert trainee Charlatan (Speightstown) as the winner of a division of the 2020 GI Arkansas Derby and stablemate Gamine as the winner of an Oaklawn Park allowance race despite their having tested positive for lidocaine. Robertson successfully argued that the horses were inadvertently contaminated after coming into contact with Baffert's assistant, Jimmy Barnes, who was wearing a Salonpas patch that contained lidocaine.

“No, I would not say that,” Robertson said when asked if the Otomax development would lead to the disqualification of the horse. “I think there are a lot of factors at play and again, one thing that I am very cautious about at this stage is that there is a whole opportunity for discovery in terms of reviewing documents from the testing labs, and all of that, and so with these cases, what I know tomorrow will be more than more than what I know today, and what I know next month will be more than what I know a week from now. And so to definitively sit her and say, look, if this happens, it's a disqualification and if this happens, then it's not, that wouldn't be fair because there are going to be a lot of facts and information yet to be learned out there.

Tuesday's announcement came just two days after Baffert revealed that the Kentucky Racing Commission informed his team that Medina Spirit tested positive for 21 picograms per millileter of blood of the drug. The positive finding will not become official until after a second, or split, sample has been tested by another lab. Baffert said Sunday that he was launching his own investigation into the circumstances of the positive.

“On May 8, 2021, I was informed by the Kentucky Horse Racing Commission that Medina Spirit allegedly tested positive for 21 picograms of betamethasone,” Baffert said in the statement. “On May 9, 2021, I held a press conference in which I stated that I intended to thoroughly investigate how this could have happened and that I would be completely transparent throughout the process. I immediately began that investigation, which has resulted in me learning of a possible source for the betamethasone, and now, as promised, I want to be forthright about what I have learned.

“Following the Santa Anita Derby, Medina Spirit developed dermatitis on his hind end. I had him checked out by my veterinarian who recommended the use of an anti-fungal ointment called Otomax,” the statement continued. “The veterinary recommendation was to apply this ointment daily to give the horse relief, help heal the dermatitis, and prevent it from spreading. My barn followed this recommendation and Medina Spirit was treated with Otomax once a day up until the day before the Kentucky Derby.”

Baffert again expressed his belief that no matter how the substance may have shown up in Medina Spirit, this was not an attempt to cheat or get an illegal edge. “This has never been a case of attempting to game the system or get an unfair advantage,” he said. He also reiterated his belief that the sport must address a situation where tests are so precise that they can find tiny amounts of therapeutic drugs and drugs that got into a horse's system as a result of environmental contamination. “Horse racing must address its regulatory problem when it comes to substances which can innocuously find their way into a horse's system at the picogram (which is a trillionth of a gram) level.”

Medina Spirit's owner Amr Zedan, released his own statement Tuesday in which he again stood behind his embattled trainer.