Back in Charge Puts Longtime Friends in the Winner's Circle 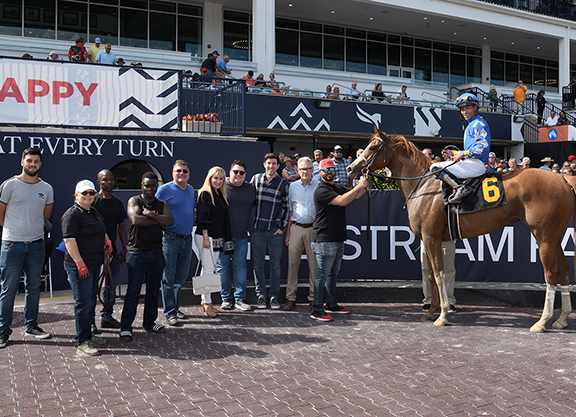 In the winner's circle with Back in Charge | Coglianese

When longtime friends and business partners Greg Back and Al LaRose sold their Special Logistics trucking company three years ago, they decided to give racehorse ownership a try. The fledgling racing stable made it to the winner's circle Sunday when longshot Back in Charge (Will Take Charge) scored a dramatic late-running debut victory at Gulfstream Park.

“It was very exciting for us,” Back, who watched the race from his Texas home said. “We knew she had it in her, but first time out, you just never know.”

LaRose was at Gulfstream for the race, but wasn't quite as optimistic even as he supported his filly at the windows.

“It was awesome,” LaRose said of the result. “We are blessed. It was a real awesome experience.”

Trainer Ken McPeek purchased Back in Charge on behalf of Back and LaRose's C&H Diamond Racing for $250,000 at the 2018 Fasig-Tipton July Sale. That purchase price was a far cry from the partners' first foray into racing nearly three decades ago with the bargain acquisition of a Texas-bred named Battle of Apollo (Seattle Battle).

“In 1993, I was friends with the track announcer at Sam Houston and I was going there every day and wagering with him,” LaRose recalled. “He told me about a horse that was for sale, he was a grandson of Seattle Slew. I bought him sight unseen for $2,500. After I bought him, I called Greg and said, 'I just bought a horse, do you want half?' He said, 'Yeah, I'll take it,' instantly. He won his first race out wire-to-wire and we were hooked. We had him for three years and he paid for himself the whole time.”

Racing took a backseat to business for a time, however.

Back added, “We've been partners and friends since the sixth grade. We decided we wanted to keep our partnership going. And we chose horse racing.”

C&H Diamond Racing–named after wives Carol and Hilda–now includes all or part of 15 horses. Also in the group of original yearling purchases is Morning Gold (Morning Line), acquired for $205,000 at the Fasig July sale, who broke her maiden at Saratoga last August. The filly was fifth in the GII Pocahontas S. and sixth in the GII JPMorgan Chase Jessamine S.

“We have Morning Gold, a very fine filly who is hurt right now,” Back said. “We have two other 3-year-olds who haven't raced yet. And we just got into a partnership on six or seven yearlings that we bought at the Keeneland September sale.”

Back continued, “We are primarily buying yearlings. That's Kenny's expertise and that's one of the reasons that we went with Kenny, his skills at buying horses.”

LaRose added, “We just bought six babies with Three Chimneys and a couple other partners at the last Keeneland September sale. We are in it for a while.”

Asked about his goals for the racing stable, LaRose said he was trying to keep realistic expectations.

“We've had a horse in Dubai already, we are running with all of the top horses in the world,” he said. “So just to not embarrass ourselves and make a good showing, is what I'm looking for. Winning the Derby or something like that would be fantastic, but you know that's one in a million. So we just want to have fun and meet a lot of nice people. People say one in 10 win and we bought 16, so she could be our one in 16.”

While the two Texans might be pragmatic businessmen, they've already broken one of their own rules with Back in Charge's name.

“It's kind of a funny story because my partner said we couldn't name them after any of our family,” Back said with a laugh. “And when I went to him wanting to name her Back in Charge, he said, 'You can't do that.' And I said, 'I sure can. That's just a verb.'”

LaRose responded, “I liked the name, so I let him get away with it. But you'll be seeing one LaRose-type in the future.”

As for what is next for Back in Charge, Back said, “My hope is that she becomes a stakes quality horse, which after that performance, I think she's headed that way. I think she has the conformation and the build, the speed and the pedigree to be one. We're going to have to huddle up with Kenny and see what he wants to do next, but I've got a feeling she will go to some Grade III or something like that, I would think.”