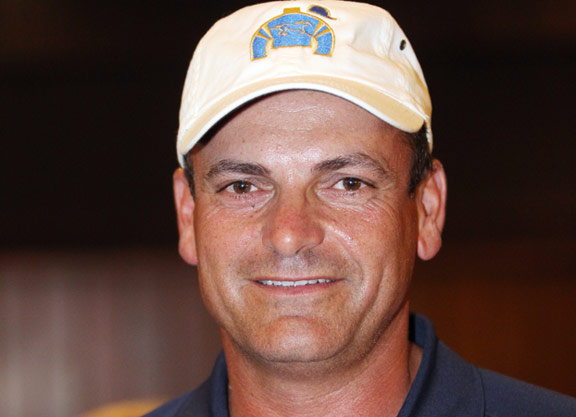 Chris Baccari went to $1.05 million at Keeneland November to acquire a Tapit half-brother to champion Honor Code (A.P. Indy) and he sends the dark bay back through the Lexington auction Monday as part of the newly formatted Keeneland September Book 1.

Consigned by Baccari as hip 86, the yearling is a son of stakes-winning blue hen Serena's Cay (Storm Cat). In addition to champion and “TDN Rising Star” Honor Code, he is also a half-brother to MGSW and GISP Noble Tune (Unbridled's Song) and SP Lady Serena (Bernardini).

It is not often a horseman spends that much money on a pinhooking prospect, but Baccari felt the colt's pedigree was worth it.

“I'm always a person for resale, so I guess yes [pinhooking was always my intention],” Baccari said outside his barn at Keeneland as hip 86 was shown to prospective buyers. “But, If I have to race him, I will race him.”

Baccari continued, “Yes [it is a lot of money to spend on a pinhooking prospect], but while some people speculate on racehorses, I sometimes speculate on foals. It's just a different stage of their life. It is a very hard family to get into. We've been chasing that family for two years. One of them brought $3 million and the other one brought over $2 million, so we were just lucky to get him.”

Over the past 10 months, Baccari believes the colt has developed the physical to match his deep pedigree.

“He lengthened out. He grew up,” Baccari said. “He did everything the right way. With his pedigree, that is what happens with those horses. He just has a good look. He didn't have to have that extreme pedigree, he just happens to have it. He is one of those kind of horses that he checks all the boxes because he has that pedigree with the physical as well.”

As for his expectations Monday night, Baccari said, “I think it should be good. He has been well received. A lot of the people that look for stallion prospects are on him.”