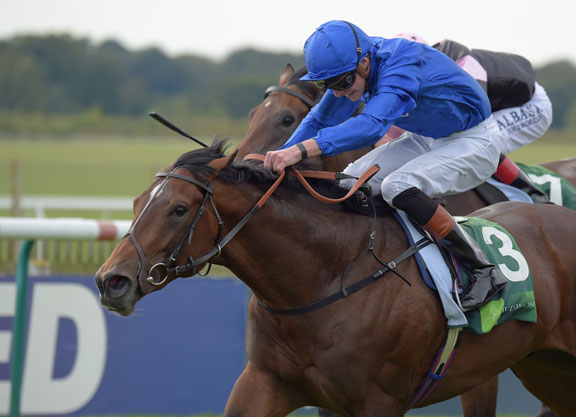 Gaining TDN Rising Star status with an impressive debut success by six lengths over seven furlongs at Sandown July 20, Best of Days succumbed to Syphax (Arch) late on when runner-up in the G3 Acomb S. again at that trip at York Aug. 17 but made amends over this more suitable distance. Heavily-supported, the bay raced towards the stand’s side of the pack early off the pace with James Doyle asking him to start his run passing the three pole. Gaining the lead 1 1/2 furlongs later, he soon enjoyed a healthy advantage as the strong-finishing Ballydoyle second string The Anvil found his stride ahead of Arcada and Sea Fox in another tight finish to one of the premier juvenile prizes. “He was chopping and changing when I tried to get him to go through the gears on that fast ground, but we got away with it,” his rider commented. “We knew he’d stay, so were quite keen to let him press on from three out and he’s done well. It’s only his third start, so you have to forgive a horse going through the dip like that. He’ll be much better when he gets a bit of cut underfoot.”

Trainer Hugo Palmer has an eye on the Derby for Best of Days and said, “He’s a horse that was gorgeous from the moment he arrived and we all learned from York, where he flattered to deceive. I was worried about the ground, as he was a little bit jarred up after York so I told James that when he hit the rising ground to the bushes three out he had to get him into top gear there and just believe he’ll stay.

He did it to the letter and I wouldn’t be surprised if the horse was a little jarred up tomorrow morning, but we’re in no hurry to do anything with him now. We’re going to dream until the Derby, or a Derby trial, that he is a Derby horse. He is by a King George winner out of a mare by High Chaparral who obviously stayed a mile and a half as well.”

Best of Days is the first foal out of the useful dam, herself a daughter of the listed-placed Best Side who also produced the G3 Dee S. and G3 Sandown Classic Trial winner Azmeel (GB), also by Azamour. Under the third dam are the G3 Gallinule S. winner Grand Ducal (Ire) (Danehill Dancer {Ire}) and listed-placed Hurricane Floyd (Ire) (Pennekamp). Mood Swings is a full-sister to the Listed Sweet Solera S. winner Catwalk (GB) and a three-parts sister to the Listed Prix Panacee scorer and stakes-producing Dazzling Heights (GB) (Shirley Heights {GB}) from the family of the Australian group 3 winner Martree (Aus) (Marscay {Aus}). Baisse also has a foal filly by Sea the Moon (Ger).