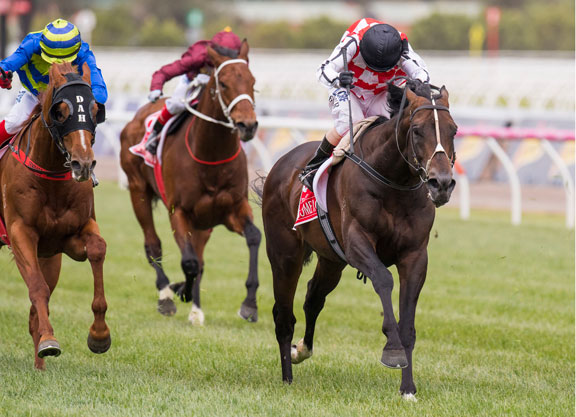 The father and son training partnership of Leon and Troy Corstens experienced ecstasy followed by agony in a matter of moments at Flemington back in March when Awesome Rock (Aus) (Fastnet Rock {Aus}) crossed the finish first in the G1 Australian Cup–the first win at the elite level for horse and trainers–only to be stripped of the win in the stewards room. Returning to Flemington 11 months later, Awesome Rock made amends on Saturday when upsetting the G1 Emirates S. on the closing day of the Melbourne Cup Carnival. The dark bay sat second through the opening stages of the 2000-metre event, about two lengths off the pacesetting Vadamos (Fr) (Monsun {Ger}), who raced keenly as he had done when making the running in the G1 Cox Plate Oct. 22. Vadamos pulled about three lengths clear as he raced toward the turn but Awesome Rock kept the frontrunner in his sights, edging a half-length clear of Endless Drama (Ire) (Lope De Vega {Ire}) and Vanbrugh (Aus) (Encosta de Lago {Aus}) on his heels. Vadamos valiantly clung on to his lead for much of the stretch run but his early exploits soon took their toll. He surrendered to Awesome Rock at the 100 metre mark, and the winner had enough left in the tank to hold off late finishers Hauraki (Aus) (Reset {Aus}) and Seaburge (Aus) (Sebring {Aus}), who ultimately deadheated for second. The disappointment of the race was favoured The United States (Ire) (Galileo {Ire}), who raced near the rear throughout and made some headway in the lane to get up for fifth.

“It was an amazing run today,” said co-trainer Troy Corstens after collecting his first Group 1 win. “I'm very lost for words, which is unlike me. It was a perfect ride today. He did such a great job, [jockey] Stephen [Baster]. He sat behind Vadamos in the slip stream and kept him out of that wind the whole way. We were confident the whole way through. We always thought he had the Group 1 in him.”

Baster added, “He's been a great horse for me. Obviously losing the Australian Cup was hard. I've got my little daughter at the races today and it's so special to ride a Group 1 winner with her here.”