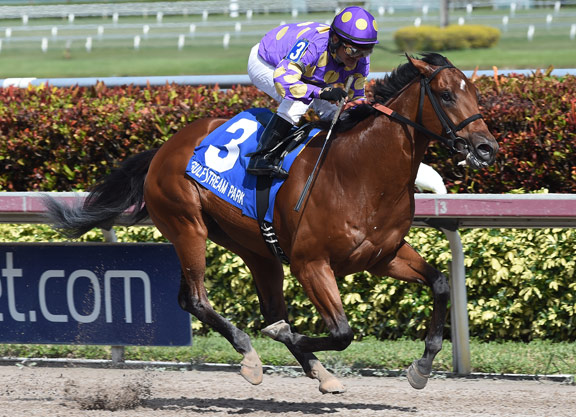 Awesome Banner kept his perfect record in tact with another dominating wire-to-wire victory in Gulfstream’s GII Swale S. Saturday. Instantly taking up his preferred position at the head of affairs, the chalk ticked off opening splits of :22.68 and :45.07 from the fence and instantly sailed clear in the stretch to win as he pleased. Economic Model, who was making just his second start since a debut win at Saratoga Aug. 8, produced an impressive late rally to complete the exacta.

“I was anxious until he drew off. I was watching the horse on the outside coming up but I knew we were clipping along,” winning trainer Stanley Gold said. “I wanted to see him do it the same way he did last time and he had that gear and he had that stamina and he just took off. I’m very satisfied, and as time goes on rather than run big races he’s showing consistency. We know kind of what we’ve got here, let’s just see how far up the ladder we can go.”

As for his next start, Gold remarked, “I honestly don’t know [what’s next]. I’m not going to think about it. Certainly two turns is going to be on the horizon and if you want to think bigger than the [GII] Fountain of Youth [Feb. 27] you have to start going along and getting points. We’ll see.”

Lowering the local track record to :51.07 with a 9 3/4-length romp in his 4 1/2-furlong debut June 5, Awesome Banner was subsequently sidelined with a knee chip and was given the rest of his juvenile season off to recover. Adding Lasix for his return in the GIII Hutcheson S. Jan. 2, the homebred made light work of the field, registering a 4 3/4-length decision over Swale fourth-place finisher Noholdingback Bear (Put It Back).

Out of a half-sister to MSW Scrubs (Dr. Caton), the winner has a 2-year-old full brother and a yearling half-sister by Harris Tweed.