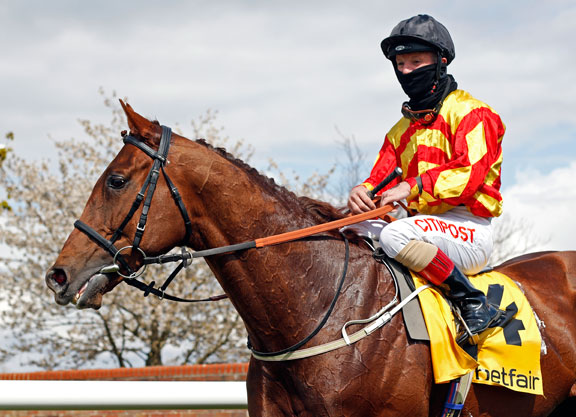 He was missing throughout all of last season, but Paul Dean's Sir Ron Priestley (GB) (Australia {GB}) made certain he is front and centre this year after dominating Saturday's G2 Betfair Exchange Jockey Club S. at Newmarket. Returning for the first time since finishing second in the 2019 G1 St Leger when winning Nottingham's Listed Further Flight S. over 14 furlongs Apr. 7, the 15-8 joint-favourite was always in his element out in the clear much as this race's last winner Communique (Ire) (Casamento {Ire}) had been in 2019. A true Mark Johnston special, the 5-year-old kept replying to Franny Norton's demands as the returning Pyledriver (GB) (Harbour Watch {Ire}) ran away from the whip which he had shown a tendency to do on occasion last term. At the line, there was a 2 1/2-length margin between the reinvented winner and one of last year's leading members of the Classic generation. “In a small field on a track like this there were going to be no excuses and we were going to come out of here either knowing he wasn't good enough at this trip and we were going to have to go back to Plan A of being a stayer, or have the result we have had,” Charlie Johnston explained. “The [G2] Yorkshire Cup and the [G2] Hardwicke will be the next two places, I'd have thought.”

Sir Ron Priestley was proving one of this year's surprise packages with this display, as the pick of his 2019 form also included a success over a mile and three quarters in Goodwood's G3 March S. His pace from the front here justified the recent rethink at Kingsley House Stables concerning his race program. As a half-brother to the stable's live G1 Gold Cup hope Subjectivist (GB) (Teofilo {Ire}), who is now the winner of the G1 Prix Royal-Oak and G2 Dubai Gold Cup, he may have made matters less complicated for connections after Saturday. “Given what he did as a three-year-old and largely because of who his brother is, we spent most of the winter thinking he was going to be a Cup horse this year,” the trainer's son and assistant added. “The Further Flight was a stepping-stone to the Yorkshire Cup and the Ascot Gold Cup, but the way he travelled and picked up there made us think a little bit and off the back of that we made the entry here and in the [June 19] Hardwicke at Royal Ascot. Today was a great opportunity to find out what we should be aiming for for the rest of the year. He's not in the [G1] Coronation Cup, which is a slight frustration in hindsight, but this result means that certainly in the short-term he can stay away from his brother. I wouldn't rule them out meeting at Goodwood further down the line.”