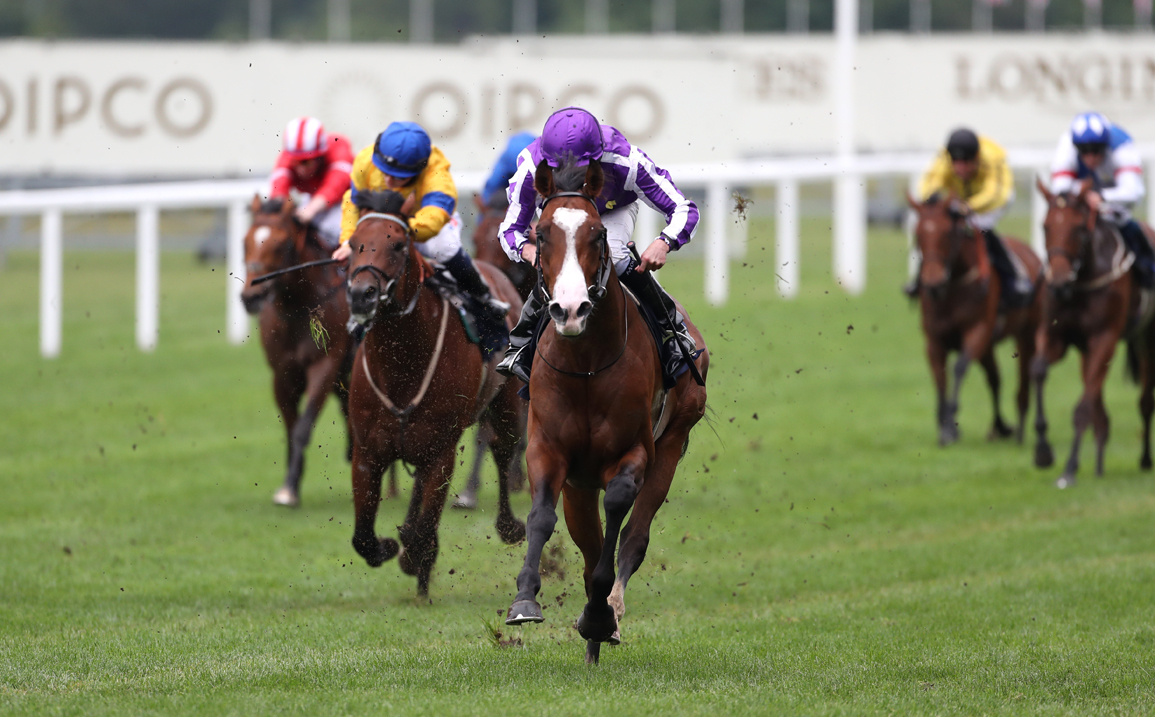 'TDN Rising Star' Point Lonsdale (Ire) (Australia {GB}) entered Saturday's Listed Chesham S. with a substantial reputation from Ballydoyle and while it was hard work in Ascot's slow ground he duly delivered as the 10-11 favourite. Held on to this time unlike when successful by 5 1/2 lengths over this seven-furlong trip on yielding ground at The Curragh June 2, the full-brother to Broome (Ire) edged ahead with 1 1/2 furlongs remaining and despite veering left denied The Queen's Reach For the Moon (GB) (Sea the Stars {Ire}) by half a length in a thrilling finale. Amo Racing's Great Max (Ire) (Wootton Bassett {GB}) was third, 3 1/4 lengths away. “He's from a good family and is still green and learning,” Ryan Moore said. “They are very attritional conditions and he's doing this on pure class at the moment. He handles that ground, but he doesn't need it.”

This was a fascinating renewal with some well-regarded colts in attendance and with Reach For the Moon taken towards the far side along with Masekela (Ire) (El Kabeir), it was the Charlie Appleby trainee New Science (GB) (Lope de Vega {Ire}) and the Archie Watson-trained Sweeping (GB) (Siyouni {Fr}) who Moore opted to track on the favourite. Keen under restraint for the first time, the blaze-faced bay travelled into contention smoothly approaching the final two furlongs but the Royal runner was not stopping under Frankie Dettori and it was soon clear that Point Lonsdale would have to graft to subdue him. While Reach For the Moon lugged right, the winner was going the other way but he was notably game in the closing stages to cling on. This seven-furlong contest is unique, being restricted to sons and daughters of either a sire or dam who won over at least 10 furlongs, and Aidan O'Brien was keen to stress the uniqueness of the winner afterwards.

Of his previous five Chesham scorers, Churchill (Ire) was the most notable in 2016 and the master of Ballydoyle who was registering a 76th Royal winner is thinking of the same route for Point Lonsdale. “He can go back for races like the [G3] Tyros [at Leopardstown July 22], the [G2] Futurity [at The Curragh Aug. 21], the [G1 Goffs Vincent O'Brien] National Stakes [at The Curragh Sept. 12] and the [G1] Dewhurst [at Newmarket Oct. 9] and all those sort of races like Churchill,” he said. “He's very brave and is full of that Galileo in that his head goes down and out. He didn't learn too much the first time and so it was nice he got a little bit of a lead today. The first and second pulled clear, so I'd day they are two good colts.”

“He's very smart and it's unusual for a horse bred to be a middle-distance horse to be out so early and be so forward,” O'Brien added. “For an Australia, he always had a lot of speed and was very natural from early on. He's still a bit of a baby, but everyone always thought a lot of him and he's really genuine. When you ask him, he digs very deep and we'd hope he'll be a classy horse, a Guineas and Derby-type horse. We were worried about the ground a little. Broome bends his knee a little bit, but this horse doesn't and is a low, slick mover. None of those horses in that race would have encountered ground like that before.”

Thady Gosden said of Reach For the Moon, who had a special audience on Saturday with his owner-breeder present. “It was a great run and we're really happy with him. That was only his second career run, he is still very inexperienced. I think Reach For the Moon and the winner Point Lonsdale got lonely in front, but they both ran on well and look two nice prospects. Obviously our lad handled the ground, but he would also prefer better ground in the future–he is one to look forward to.”

Point Lonsdale's aforementioned full-brother was unable to provide the dam Sweepstake (Ire) (Acclamation {GB}) with a black-type double in the G2 Hardwicke S., but he has done plenty for her already by winning four times in pattern company–including this year's G2 Mooresbridge S.–and finishing runner-up in the G1 Tattersalls Gold Cup. Sweepstake, who took the Listed National S. and was runner-up in the GIII Appalachian S., is a daughter of Dust Flicker (GB) (Suave Dancer) who is a full-sister to the G3 Prix de la Nonette winner Dust Dancer (GB). She is in turn the second dam of the G1 Phoenix S.-winning sire Zoffany (Ire) and the G3 Bengough S. winner Projection (GB), who shares Acclamation (GB) as a sire with Sweepstake.