Australian Way of Life For Hutch 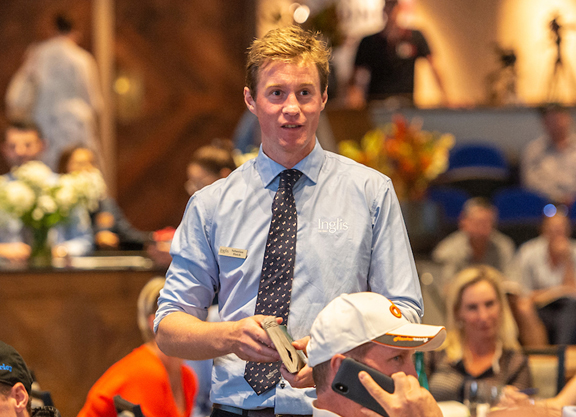 In 2008, Sebastian Hutch was presented with an opportunity to spend three months in Australia working at Coolmore's Southern Hemisphere base. The Irish native, who hails from Co. Cork, admits that Australia was not high on his list of must visit destinations, but some 13 years later Hutch has become ingrained into the fabric of the Australian industry and now holds the position of General Manager in Bloodstock Sales & Marketing at Inglis, whose forthcoming Easter Yearling Sale is a highlight on the bloodstock calendar.

Hutch's experience prior to his trip down under involved stints with John Oxx and Neil Drysdale before spending a summer under the tutelage of Richard Henry which ultimately forged the way for Hutch becoming an integral member of the Coolmore Australia team.

“It was a fantastic place to work,” said Hutch upon reflection of his 10 years spent with the operation. “I was there at a time when Encosta De Lago (Aus) was champion stallion and I was able to be part of Fastnet Rock (Aus) becoming a champion stallion too. There were a lot of good horses bred on the farm at that time as well. The likes of Winx (Aus), and Vancouver (Aus) are two good examples. It's hard not to learn in that kind of environment.”

In 2018, Hutch's time working for the company came to an end as he left to take up his current role with the powerhouse sales company Inglis.

“There was an opportunity to come to Inglis in a bloodstock orientated role,” said Hutch. “I hadn't really given any consideration to it in a proactive sense but when the opportunity arose, it seems to me I would have been very naive not to consider it.”

On the appeal of working for Inglis Hutch said, “It's a company with tremendous history, a fantastic reputation, not just domestically but internationally. A lot of what I discussed with people prior to coming to Inglis, in terms of any particular role, was very stimulating. I was going to be joining a team that was very knowledgeable, very competent and effectively they were more people that I could learn from. Also, there was going to be the opportunity for me to contribute in a constructive manner as well.”

Although it cannot have been an easy decision to leave Coolmore, Hutch has not looked back citing, “I was at a stage in my career where there was an opportunity for me to make a change and I haven't regretted it. I'm really enjoying my time here.”

Of course Hutch is not the first to leave the Emerald Isle for a 'short stint' in another country and then extend their trip to the point of never leaving.

When asked why Australia proves to be such a popular country for expatriates Hutch said, “I think there are probably a lot of factors involved in that. I think a massive thing is that the racing spectacle is year round here. If you're passionate about racing there's not really a month of the year where the racing isn't engaging. The participants in the sport are really, really accessible in this part of the world too. Whether it's the top trainers, the jockeys, owners, breeders, for a young person looking to immerse themselves in the industry, it would seem to be a really easy thing to do as those kind of people are really forthcoming with their time.”

Aside from those influences the Australian industry appears to go from strength to strength and in the 13 years that Hutch has been there he credits the “narrative of racing” and the increase in prizemoney each year as the driving forces to the successful model in place.

Of course with the increase in prize money and race initiatives such as The Everest combined with the successful ownership model of syndication the bloodstock industry continues to thrive. The forthcoming renewal of the Inglis Easter Yearling Sale boosts some 42 siblings to Group 1 winners and has progeny by prominent stallions from both hemispheres represented, including the last crop by the deceased Japanese stalwart Deep Impact (Jpn). Aside from that, the sale also offers yearlings that were bred by the late Sheikh Hamdan's Shadwell Stud who announced in February that they were disbanding their operation in that part of the world. Those yearlings will be offered by Yarraman Park Stud.

“It's just a fact traditionally that each and every year the best yearlings Australian breeders have to offer end up at Easter, certainly a greater percentage of them anyway,” said Hutch. “The catalogue looks really strong this year. I've been up and down to various farms over the last few weeks just trying to check in with certain drafts and the standard would appear to be tremendously high.

“Certainly the feedback from buyers who have been doing farm inspections in advance of the sale has been hugely positive. It's hard not to be excited about the sale. Obviously it comes with huge responsibility when you're selling people's best yearlings but it's very exciting and we're very much on track for a good sale.”

Although Australia has been hit with catastrophic weather in the last two weeks, leading to the postponement of the Golden Slipper, pre-sale inspections have continued to take place. Over the years those yearlings who have lit up the Inglis bid board have gone on to dominant at the top level on the racecourse with graduates including multiple Group 1 winners The Autumn Sun (Aus), Loving Gaby (Aus), Merchant Navy (Aus) and Russian Revolution (Aus) to name a few. For any bloodstock enthusiast, Inglis Easter provides a stimulating exhibition and Hutch has every reason to be looking forward to this year's sale.