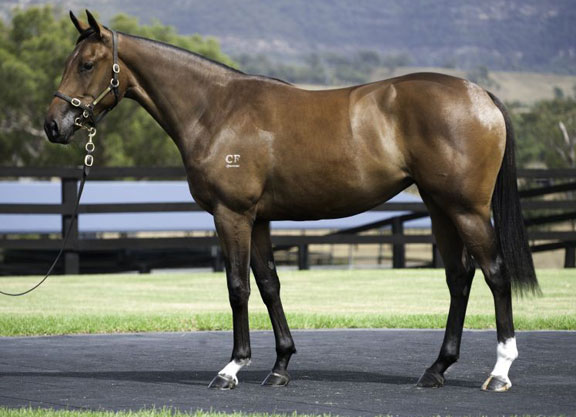 Sunday’s fourth race at Tokyo, a 1400m turf maiden, has attracted a full field of 18, including a trio of Southern Hemisphere-bred 2-year-olds, who will receive a weight and/or sex concession from their Japanese-bred counterparts.

Flora de Mariposa drew awkwardly in gate 16 and will be ridden by leading jockey Keita Tosaki for trainer Noriyuki Hori. She is the 3-2 favorite in overnight wagering.

Strawberry Hill-bred Partout (Aus) (More Than Ready) makes her second trip to the races Sunday, having finished fourth on her Jan. 21 debut in a 1200m test on dirt at Nakayama. Purchased by Katsumi Yoshida for A$350,000 at the 2016 Magic Millions Gold Coast Yearling Sale, the daughter of Aussie Group 3 winner Sugar Babe (NZ) (Exceed and Excel {Aus}) should appreciate the switch to turf for this try. She is trading at 13-1 ante-post.

Cosmo Peridot (NZ) (Jimmy Choux {NZ}) is the most experienced of the trio as he makes his third trip to post Sunday. Bred by Chouxmaani Investments, the NZ$210,000 graduate of the 2016 NZB Select Yearling Sale was a close fourth on Chukyo debut Jan. 22 before a midpack finish at Tokyo when last seen Feb. 11.