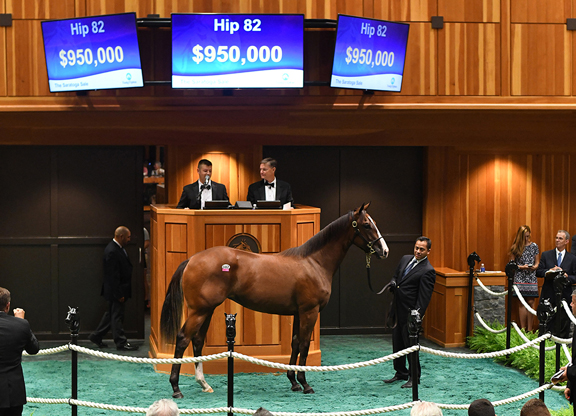 MUNDAYE CALL (Into Mischief) was acquired by Larry Best’s OXO Equine for $950,000 at last year’s Fasig-Tipton Saratoga Select Sale. The blue-blooded filly hails from a deep family of Grade I winners, including the GI Belmont S.-winning siblings Jazil (Seeking the Gold) and Rags to Riches (A.P. Indy). The Don Chatlos pupil recorded a 1.00 3/5 (1/24) bullet drill out of the gate here at the Spa Aug. 4 (Click for XBTV Video) in preparation for her debut.

Harlem Heights (Bernardini) will attempt to follow in the hoofprints of her highly esteemed siblings when she takes her place in the starting gate just to the inside of Mundaye Call. The Phipps colorbearer is a half-sister to multiple Grade I-winning turf star and sire Point of Entry (Dynaformer) and the ill-fated Grade I victress Pine Island (Arch). Trained by Hall of Famer Shug McGaughey, the bay has been breezing consistently over this surface, including a July 21 half-mile out the gate in company in :49 flat (32/101) (Click for XBTV Video).

A highly touted group of juvenile fillies will line up for the fourth event on Sunday’s Del Mar card. The impeccably bred AMERICA’S SURPRISE (American Pharoah) was snatched up by Phoenix Thoroughbreds for just $325,000 at last year’s Keeneland September Sale. She boasts the same trainer/rider connections of Jerry Hollendorfer and Mike Smith as her half-sister Songbird (Medaglia d’Oro), a dual Eclipse Award Champion and nine-time Grade I winner. Songbird was undefeated as a juvenile, capturing three consecutive races before capping her 2-year-old season with a tour-de-force victory in the 2015 GI Breeders Cup Juvenile Fillies.

Inspiressa (The Big Beast) turned heads after a :20 4/5  quarter-mile breeze at this year’s OBS March sale and became the most expensive filly at the sale after fetching $850,000 from West Point Thoroughbreds and Anthony B. Sandbrook. The imposing filly has turned in several sharp workouts for trainer John Sadler over this track, including a bullet :35 1/5 (1/27) three-eighths out the gate July 18. Her dam Lucky Trip has produced an outstanding seven winners from seven runners to race.

Breaking from the outside of Inspiressa is the Richard Mandella trained-Superstition (Ghostzapper). An $850,000 yearling purchase at the Keeneland September Sale, the dark bay is a full-sister to Grade III victress Gloryzapper and a half to graded stakes performer Banree (Macho Uno). She blitzed three-eighths out the gate in :36 1/5 (1/16) July 29 at this oval. TJCIS PPs