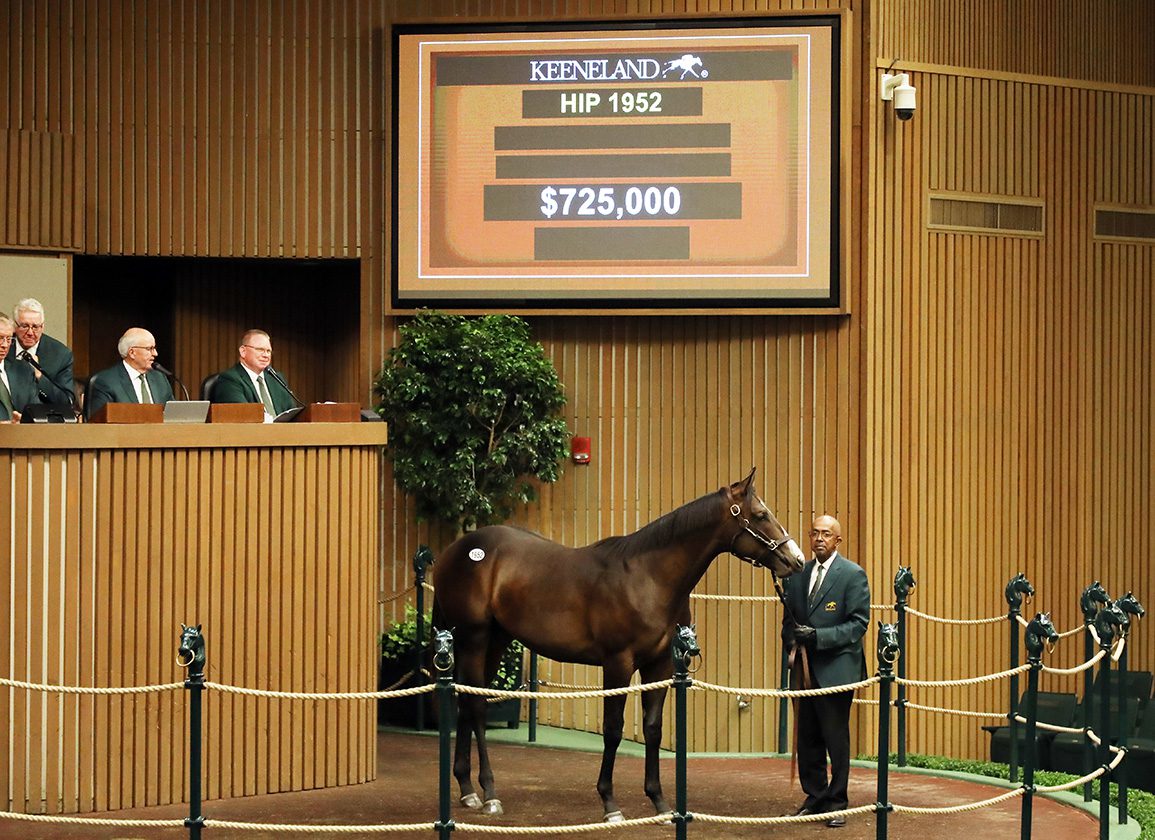 Session-topping Hip 1952 in the ring | Keeneland

What was a solid final Book 3 session of the Keeneland September Yearling Sale suddenly jumped into high gear in its final 45 minutes, producing its four highest prices in the span of some 80 hips, led by a session-topping son of Audible who sold for $725,000 to Flurry Racing Stables just six lots from the end of the all-day session.

“We came in with nice individuals that we thought would sell well,” Cauthen continued. “They had nice physicals that would probably suit a pinhooker or a higher-end racing stable. And we just found the competition for those individuals was incredible.”

The Keeneland September sale was strong out of the blocks last Monday and Cauthen agreed there was a carryover to the auction's later books.

“This sale started in Book 1 with a bang. We kept selling great horses above and beyond expectations,” Cauthen said. “But we were putting very good individuals in front of them. And that does tend to trickle down into the next books because if they keep getting pressed out of the market, they realize they have to adjust their sights and probably spend a little more.”

The domestic buying bench continued to dominate the results sheets through Book 3.

“The strength of the domestic market is directly related to the strength of our racing market,” Cauthen said. “You can go out with a racehorse and earn a horse's money back and continue to have enjoyment and have it make some sense. And that has led us to a very, very strong domestic market.”

Bloodstock agent Clay Scherer, who purchased Sunday's session-topper on behalf of Staton Flurry, agreed the country's purse structure has led to plenty of competition in the sales ring.

“There is still strong demand for a Thoroughbred,” Scherer said. “It's never been more profitable to own one on the racetrack with the purse money that we have now. You are almost at the point where you can run year-round for six-figure purses for a maiden special weight. That's incredible.”

The Keeneland September sale continues through Saturday with sessions beginning daily at 10 a.m.

A Late Flurry of Activity

Staton Flurry had already left Lexington when bloodstock agent Clay Scherer called to tell him about a colt by Audible (hip 1952) selling late in the day at Keeneland and, with Scherer's enthusiasm in high-gear, the owner went to a session-topping $725,000 to acquire the youngster from the Paramount Sales consignment as Book 3 came to a close Sunday.

“I've just seen pictures of him,” Flurry said Sunday night. “I left the sale yesterday morning and Clay hadn't looked at him yet. But I had the Wi-Fi on in the plane when I was flying home and he texted me, '1952 is a freak.' He said, 'We have to buy this thing.' He sent me some photos and I saw the walking video online. He has been driving me crazy all morning about this horse–he's probably called 10 or 12 times today and texts and similar pictures. The last time he was this hyped up about a horse was at the 2-year-old sale last year and we ended up buying what became Interstatedaydream. She has worked out all right for us. For him to get this hyped up about a horse, I said it must be something special.”

Hip 1952 is out of Oh Boo Hoo (Kafwain), a half-sister to multiple Grade I placed Palacio de Amor (Dixieland Band).

“He was just a nice, beautiful horse,” Scherer said of the yearling's appeal. “He has a typical Into Mischief look to him and bred the same way as [champion] Gamine. He looks like a fast horse who can carry it around two turns, a Classic distance type horse.”

Asked if he thought he would have to go that high to acquire the colt, Scherer laughed and said, “Not even close. I was on the phone with Staton and, when you fall in love with one and you have the right people behind you, they don't want to lose when they think they have a shot to go win the biggest races.”

Asked what he thought about the session-topping price tag, Flurry said, “We knew he was going to be expensive. We were thinking probably in the $600,000 range. I actually told Clay to stop bidding, but he said, 'Let's hit it one more time.' It's rare for Clay to get this excited or this hyped up about a horse, so for him to really say that told me all I needed to know.”

Flurry admitted, among the many partnerships shopping for colts, it has been tough finding the Classic-type youngsters he is looking for in order to fulfill a lifelong goal.

“The top of my bucket list–everybody looks at me like I am crazy–but I want to win the Arkansas Derby more than anything,” Flurry said. “It's home. I grew up about 1/4-mile from there. So we are looking for something that can win us that and, if you win that, you've got a good shot at the Kentucky Derby.”

Flurry continued, “It's been especially tough at this sale. Normally you see a million-dollar horse sell. But this sale, it seemed like every other horse was a million-dollar horse. You've got the partnership groups partnering with each other where normally they go against each other and this year they are all forming teams to buy the big ones to go for the two-turn horses. It's like the whole dynamic of the sale has changed from last year to this year.”

Gabriel Duignan hit a pinhooking home run with the $725,000 session-topping son of Audible. The horseman had purchased the colt for $160,000 as a short yearling at this past Keeneland January sale.

“He was a beautiful foal when I bought him,” Duignan said, while savoring the late-session fireworks. “It seemed like a good price at the time. He's just done super. He's just an absolutely beautiful horse. He's a horse that there is nothing you would change about him.”

Of the colt's development from January to September, Duignan said, “I think maybe the market has changed a bit, too, but he came in and he did super. He was squeaky clean on the X-rays. He was just a marvelous horse. He was probably the busiest horse I've ever had at a sale. And he showed like a champ. He never got tired. Every show was a good one. He turned out beautiful. He did everything you dream of.”

Yearlings by first-crop sire Audible (Into Mischief) have been in demand all summer and Duignan is at the top of the list of the stallion's fans. Just prior to selling hip 1952, Paramount sold another colt by the sire (hip 1941) for $350,000 to Mike McLoughlin. Duignan's Springhouse Farm purchased Mrs Vargas (Bernardini) with the colt in utero for $200,000 at the 2020 Keeneland November sale.

“I do love them,” Duignan said of Audible's offspring. “I think he was a very good racehorse with a nice pedigree. I think he is making nice stock. He's been very good to me at this sale.”

Jim and Dana Bernhard's Lynnhaven Racing continued its shopping spree at the Keeneland September sale with a pair of purchases Sunday. The duo was led by a colt by Into Mischief (hip 1871) who the couple purchased for $650,000 from the Four Star Sales consignment. Bred by Susan Casner, the yearling is out of stakes-placed Kayce Ace (Tiznow), a full-sister to Colonel John.

“He was a super nice colt,” said Four Star Sales' Kerry Cauthen. “Probably in the spring when we first saw him, he toed in a little bit and we didn't think he probably belonged in Book 2. He was probably a little weedy at that time. But he just bloomed into what was a heckuva nice, racy body. And matured. And we couldn't have been happier with him. That was rewarded in the marketplace today.”

Also Sunday, Lynnhaven Racing purchased a colt by Collected (hip 1672) for $300,000 from the Stone Farm consignment.

Sergio de Sousa freely admits he forms an attachment to his broodmares and the Hidden Brook managing partner, was rewarded for his faith in Wedding Jitters (Broken Vow) when the mare's colt by Gun Runner (hip 1681) sold for $500,000 to Winchell Thoroughbreds and Three Chimneys Farm Sunday at Keeneland. De Sousa co-bred the yearling with Jonathan Mills from Cranford Bloodstock and in a foal share with Three Chimneys.

“He was a very straightforward colt and we always liked him at the farm,” de Sousa said. “He showed well and he got a lot of action. You always hope for them to do well–$500,000 was great. We were hoping he would do something in there, but you never know until they go through and the hammer drops.”

Wedding Jitters was bred by Hidden Brook and sold by the operation for $110,000 at the 2015 Keeneland September sale. She won twice in nine starts and set a track record at Gulfstream in 2017. De Sousa claimed the filly for $16,000 out of that 7 1/2-furlong record-setting performance.

“I have always been a huge fan of Broken Vow,” De Sousa said of his decision to claim the mare. “And she was a beautiful foal. We had her dam, Lightfoot Lane, and we sold her, I think she went to Saudi. But I like to buy back into our families.”

Of the mating to Gun Runner, De Sousa said, “He was a tremendous race horse. He was typey and that's kind of what I wanted to breed the mare to. She has a Nyquist who is very nice and very typey. It was a bit of a gamble on Gun Runner. Three Chimneys was good enough, through Doug Cauthen, to do a foal share with us on the mare. It was a gamble, but the body type was what we were looking for, we were looking for a stallion to complement her. And we obviously got lucky that Gun Runner is just a fantastic horse having a great start at stud. Everything kind of lined up the right way.”

De Sousa purchased back into another Hidden Brook family which was represented by a yearling in Sunday's sixth session of the Keeneland sale. Theory of Chance (Archarcharch) was sold by Hidden Brook for $95,000 at the 2014 Keeneland September sale and was reacquired by the operation for $45,000 at the 2017 Keeneland November sale. Her Collected colt (hip 1652) sold for $210,000 to John Brocklebank, as agent for Bill Peeples.

“I have a problem sometimes with some of these mares, especially some of the ones we sold,” De Sousa said with a chuckle. “It's hard for me to let them go. I really enjoy breeding horses because there is a connection and a story behind the ones we have. I can only imagine how people like Claiborne and Mr. Hancock, they go so far back on these families, it's very neat to be able to talk about the family that deep. Obviously, we want to make as much money as everybody else, that is what our business is, but I think there is also an attachment to the families or the horses as individuals.”