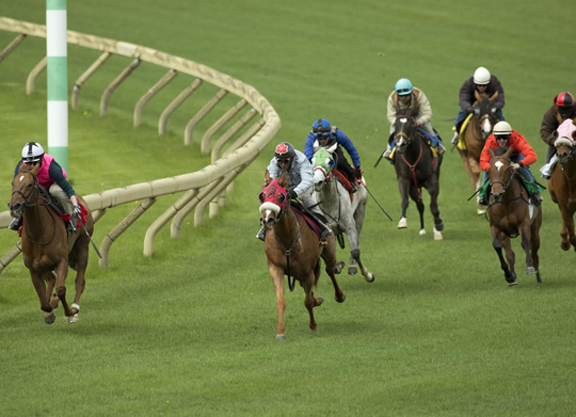 Woodbine’s grand experiment with holding clockwise races on its turf course took a major step forward Monday as seven horses competed in a five-furlong “trial” race with a right-hand turn. With the horses going at a pace more fitting for a morning workout, Emma-Jayne Wilson won the non-betting event with Internal Bourbon (Not Bourbon). There was no purse for the race. [video]

“There were no major problems, and that was one of the key things,” Wilson said. “That’s the biggest thing. We wanted to make sure that everything would go smoothly. This was as close to a race scenario as possible and everyone handled it well. There is still a learning curve to it. The horses that have never done it will take a second to say, ‘Ok, now I get it, I’ve got to take a right turn.’”

Woodbine management will run as many as 40 clockwise turf races during the 2016 meet. The intent is to spice up the racing programs and to use a part of the turf course (the clubhouse turn) that is rarely run over since most normal races over Woodbine’s expansive grass course are run around one turn.

The first clockwise pari-mutuel race is scheduled for June 10. Yesterday’s trial race was the only one that will be held. Woodbine management’s attempts to duplicate racing conditions including having announcer Robert Geller call the race.

Wilson has ridden in Hong Kong and in Europe, so she had prior experience with clockwise races.

“I wouldn’t classify it as strange for me,” she said. “I probably have a little more experience going clockwise than the horse I was on, as well as some of the other jockeys in the race. I don’t believe any of the horses in the field have gone the wrong way. They may have trained the wrong way; we’ve done some clockwise training sessions in the mornings. In post-race discussions with some of the other jocks, they said their horses weren’t ready for the turn as much as they would have been for a left-handed turn. It took them a second to get balanced and have them prepared for the turn, but everything seemed to go well.”

That Internal Bourbon won the “race” was not a surprise. Trained by Roger Attfield, she’s a top allowance horse who finished second last year in the La Prevoyante Stakes.

Emile Ramsammy, who finished third on Zazinga (Head Chopper), said riders will have to adjust their style for the right-handed races.

Though right-handed races are common throughout many other parts of the world, it remains to be seen how North American horseplayers will react to a new wrinkle when it comes to their handicapping.

“I think people will sit back and watch the first couple as the betting public isn’t going to be certain how it’s going to play,” Wilson said. “I think the inside will have an advantage. There will be a learning curve. But I am excited. Woodbine is doing everything to ensure that these races will be safe and it gives us the opportunity to use this very large turf course to the fullest.”