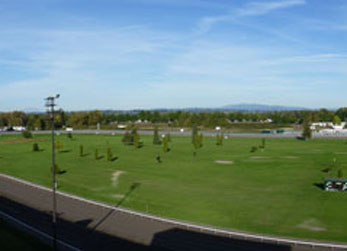 Outside-of-the-box thinking is often a good thing, particularly when it comes to sports like horse racing, where a lack of creativity and innovation has often been seen as one of the reasons the game isn't growing. But what about way, way, way outside-of-the-box thinking? Might that work? The team at Portland Meadows, along with Andy Stronach, are about to find out.

Stronach is the son of Frank Stronach, whose Stronach Group, owns several racetracks, including Portland Meadows and Gulfstream Park. The younger Stronach is behind an idea called the National Racing Club Sweepstakes, which involves a Rainbow Six style bet. The National Racing Club Sweepstakes debuted Monday at Portland and will be held there every Monday between now and Feb. 8.

To say that this promotion is different doesn't begin to tell the story.

Stronach developed the idea, which largely revolves around a Rainbow Pick Six style bet. Like the wager at Gulfstream, the jackpot or total pool is paid out only if one winning ticket is sold on the bet. If not, there is a carry over portion and the hope is that the jackpot will build into the six or seven figures, something that always generates interest among gamblers.

But the comparisons to the Gulfstream Rainbow Six begin and end there. In the National Racing Club Sweepstakes, every race is run at two furlongs. The idea behind the odd distance is that the races are supposed to be very difficult to handicap. And every horse is owned by Stronach himself, who then leases them to what he calls “racing clubs.”

“The idea in general was to make the bettor the focus by creating great betting races,” said Karsten Hennze, Vice President, The Stronach Group. “Whether we did that perfectly or not, that was the goal. That's the trajectory with where we want to go with these ideas. We do not want to have five-horse fields with an odds-on favorite in there. We want full fields and interesting betting races. The idea will be to eventually try to figure out a way we can we engineer races so we have closers, early speed, grinder types, so when you handicap the races you feel that it is both interesting and tough. We're not there yet but this was a step along the way.”

Conditions were far from ideal for Monday's debut. The track was sloppy and Portland Meadows had meant to begin the wager a week earlier, but had to cancel racing that day. Many bettors may have been confused because the track put much of its marketing effort into promoting the bet for the Jan. 4 card that never happened.

“We obviously would have liked to have gone crazy with a really high handle,” Hennze said. “But from people I talked to beforehand and from the people at our other racetracks who have been involved in other Rainbow 6 bets it probably was right in line with what people expected. Conventional wisdom was that we would do between $20,000 and $30,000, so I was happy with what we handled. Obviously, when you put up a $100,000 guarantee there are some nervous moments, so we were watching everything very closely with interest. We're hoping it builds from here.”

Before scratches there were 12 horses entered in each of the six National Racing Club Sweepstakes races and there were horses of every variety–ones coming from route races, ones coming off long layoffs, ones who showed some early speed but were almost always heading up the rear at the finish, ones shipping in from a variety of racetracks. To make matters even more confusing for the bettors, the trainers were not allowed to chose their own jockeys. Instead, they were assigned mounts on a random basis. So the worst rider at the track might wind up on the best horse in the race and the best rider on the worst horse.

Ironically, the races were mostly easy to figure out…in fact, maybe too easy. Three of six were won by heavy favorites and the only winner who was anything close to a long shot paid $31.20. Six tickets had all six winners and they paid $717.74 each for a 20-cent bet.

“It was an interesting first day,” Hennze said. “The way we grouped the horses and having the races at two furlongs, the intent was to make the races difficult. We wanted a balance between making it impossible to hit and difficult to hit. We are sensitive to comments about what do we need to do to cultivate new fans. If a race is impossible to handicap is that really doing us any good? A lot of short-priced favorites won, so it seemed like these were races that you could handicap. Having multiple winning tickets at the end spoke to that.”

Andy Stronach apparently understood that he couldn't get these races to go through conventional means, by offering small purses, running them at odd distances and hoping that the horsemen would fill the entry box. So he went out and got all the horses himself. Each one that ran Monday is officially owned by Stronach's Pan Am Racing Stable.

But Stronach hoped to add another creative twist to his experiment. Instead of every horse racing under his stable name, they were assigned to “racing clubs,” all of them based on states or Canadian provinces. Seventeen different states and provinces were represented in the clubs, some of which had multiple divisions (e.g. Ohio Racing Club 3). The horses were assigned to clubs based largely on where they were racing prior to arriving at Portland Meadows.

“These horses were bought from around the country with an eye toward developing a club or team approach, so people would have cheering interests,” Hennze said. “Andy is very interested in developing fans and fan participation at brick-and-mortar facilities, both at the racetracks and OTBs. We are trying to drive the fan experience by creating something different.”

Hennze wasn't sure what was next for The National Racing Club Sweepstakes after it ends its stint at Portland Meadows, but he said the Stronach Group is committed to the concept and that this was a trial run.

“A lot of areas of this are fluid and we'll see how they develop from here,” he said. “We got the first races under our belts and now we have something to work with and build on.”