At Long Last, Hot King Prawn Gets His Group 1 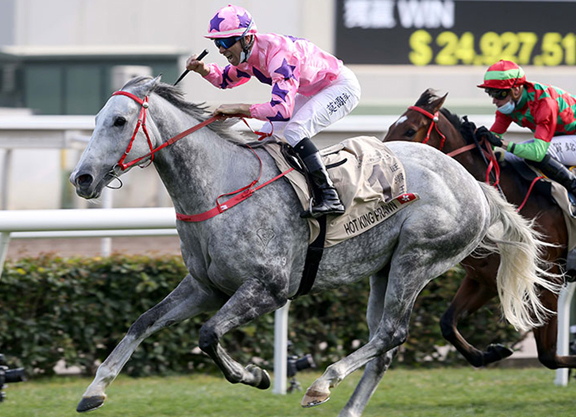 Entering Sunday's G1 Centenary Sprint Cup at Sha Tin, the likeable Hot King Prawn (Aus) (Denman {Aus}) had won half of his 22 career starts and had been out of the top three on just four occasions. His record at Group 1 level left more to be desired, as he had been blanked from seven previous tries, but the John Size trainee righted that wrong with a convincing success Sunday.

Drawn gate two for Joao Moreira, Hot King Prawn was driven along early and found himself in the perfect spot from third as Voyage Warrior (Aus) (Declaration of War) set a decent pace from Computer Patch (Aus) (Exceed and Excel {Aus}). Moreira peeled Hot King Prawn three deep outside of the dueling front-runners at the 400m mark, reeled in Voyage Warrior with a little less than a furlong to travel and came away to a facile success. Regency Legend (NZ) (Pins {Aus}), first-up for better than 400 days and who displayed some obstreperous parade ring behavior, flashed home up the fence to take a photo for second from Big Party (Aus) (Exceed and Excel {Aus}).