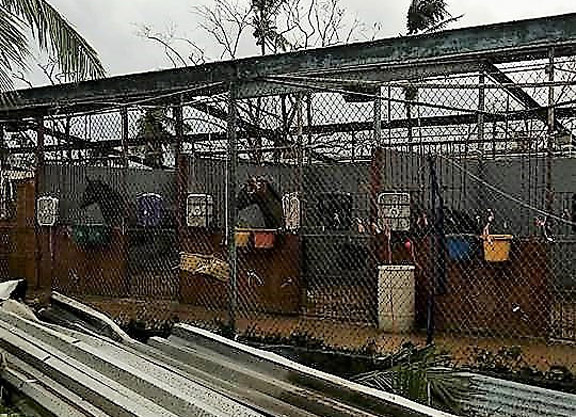 The devastation in Puerto Rico caused by Hurricane Maria includes the island's racehorse population. According to Shelley Blodgett of Caribbean Thoroughbred Aftercare, Inc, four fatalities have been confirmed among the horses on the backstretch of Camarero Racetrack. Blodgett said she fears when more information becomes available the death toll among horses at the racetrack will rise.

Blodgett has been receiving information from a volunteer from her organization, Kelley Stobie, who is in Puerto Rico and has been spending countless hours at the racetrack trying to assist horses in need. It is very difficult to get a cell phone call into or out of Puerto Rico, but Blodgett said Stobie has been resourceful and has managed to communicate with her on several occasions.

Having spoken to Stobie, Blodgett paints a grim picture of the scene at the racetrack, where she says several horses have been abandoned since the storm pelted Puerto Rico.

“A lot of things are in motion at the track, but things have been very hard and some of the horses have not gotten the attention that they need,” Blodgett said. “There is a lack of resources and many of the owners, trainers and grooms are not able to get to the track. Kelley has been there every day taking care of the 16 off-the-track Thoroughbreds we are caring for. Yesterday, she watered about 100 racehorses. With 10 horses she got to, she was literally pulling them out; they had literally not been touched since the hurricane. She was able to get them water. We have heard of four confirmed deaths, from founder and colic. Some connections have been hauling in water for their horses since day one and others have just been abandoned.”

When asked if there will likely be reports of more horse deaths, Blodgett replied: “I think there will. Some horses are just getting water now, but forage is still not readily available for some connections. Hay production is not up and running in Puerto Rico. Some of the horses are standing in muck up to their ankles. They are dehydrated. Some have raced a lot and there's been wear and tear. Those ones are a little underweight to start with, so they have less reserves to deal with this.”

Including non-racehorses, there are about 950 horses on the Camarero backstretch.

Blodgett said that while many horsemen have done everything possible to get to the track and care for their horses, others have not made it a priority.

“One of the main problems there is that the care-givers have had their lives turned upside down,” said. “They may not have a means of getting to the track or they are busy dealing with their own lives. There are some owners who are just abandoning their horses and saying just let them be. They are going to worry about themselves first. But I don't think that is the majority. These people are going through a crisis. I think they've depleted, their physical, mental and emotional reserves.”

The worst may be over as several groups, Carribean Thoroughbred Aftercare among them, have huddled and are working together to help solve the crisis. Other organizations include the Humane Society of the United States, the American Veterinary Medical Association, the American Association of Equine Practitioners, The Jockey Club and the United States Equestrian Federation. Blodgett said arrangements have been made to fly in pelletized hay, though it is unclear when it is going to arrive. She also said about 40 to 50 horses have been put into a quarantine facility and once cleared will be shipped to Miami. She said active racehorses are being given priority over all other horses when it comes to leaving the island.

Keith Kleine, a spokesperson for the AAEP, said that group has members in Puerto Rico that are helping and he believes, in time, volunteer vets from the continental U.S. will fly down to assist them. The biggest problem, he said, is finding a way to communicate with people in Puerto Rico. Kleine is looking in to purchasing satellite phones.

“This is still a work in progress and we still have to have some further assessments to make on the ground,” he said. “Those are short-term issues. There are needs like food and medical supplies. We have those. That's the easy part. Getting access to the island and the ability to operate there is the challenging part.”

Kleine said the AAEP does not need supplies, but said financial contributions to the AAEP or any other organizations trying to help the horses of Puerto Rico are badly needed. Here is a list of groups you may wish to contribute to: