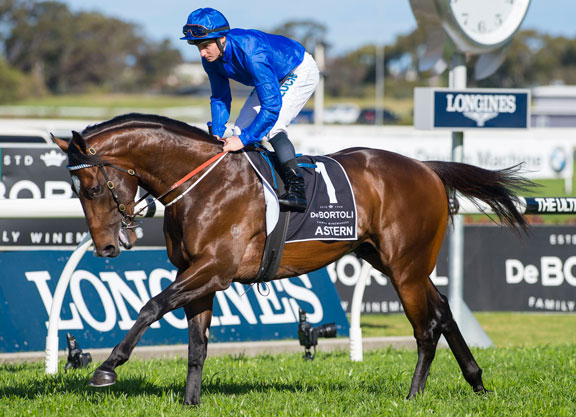 The regard in which Astern (Aus) (Medaglia d’Oro) is held in the Godolphin camp was plain to see in the prolonged celebrations of jockey James McDonald after Saturday’s A$1-million G1 Golden Rose S., which started before the colt had crossed the line victorious and continued all the way back down the walkway to the winner’s enclosure.

Beaten only once when down the field in last year’s G1 Golden Slipper, Astern is now a five-time winner, with his most important triumph to date in Rosehill’s G1 Golden Rose S. setting him up for a trip to Melbourne and a tilt at the G1 Caulfield Guineas on Oct. 8. Drawn in stall 12 of 14, race favourite Astern was taken back from the start by McDonald to settle in the second half of the pack as a fast first 200 metres slowed to a steadier tempo around the bend in the 1400-metre contest. Steering a wide berth off the turn, McDonald eased the colt to the front and kicked for home to leave his rivals toiling in his wake.

The Chris Waller-trained Omei Sword gave best of the rest when a hampered run saw him make late headway to take second, 2 1/4-lengths off the winner, with Astern’s stablemate Impending a head behind him in third.

“We’ll get him home, see how he pulls up. It is just nice to have a special colt,” said trainer John O’Shea, who, with McDonald, was recording back-to-back wins in the Golden Rose after the victory last year of Exosphere (Aus) (Lonhro {Aus}).

He continued, “He looks like he runs it, doesn’t he? We’d envisage taking him to Melbourne for the Caulfield Guineas Prelude. I’d suggest he’d probably run a mile at Caulfield on today. He showed how dominant he is. It was a good team effort to get him here. You’ve got no idea how much goes into this. How many people, you can see how emotional the boys are.”

Astern’s elated jockey added, “He’s an absolute ripper. It was pretty clean sailing. I’m glad I drew 12 out of 14, I tell you. It was a slowly run race, but the slower they went, no matter where I was in the field, the better for this horse because there is not a horse in the land that would sprint past him over 400 metres. Bring on Winx.”